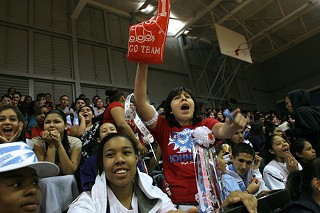 The Austin Independent School District is drafting a strategic response to performance issues at its high school campuses, an effort that may or may not be too late to save Johnston High School.

At a special-called meeting Monday night, AISD's top academic officers outlined what the data, crunched and tweaked in the right way, can tell the district about its challenges, strengths, and needs.

Here are some conclusions from those numbers: The experience of teachers on a campus and better attendance rates are highly correlated to better test scores. Being a low-income student is not a sentence to failure; some campuses are doing significantly better than others in teaching this student population. And the district continues to struggle with statistics such as the disproportionate number of African-American students who are the subject of disciplinary referrals when compared to their white counterparts.

A lot of this information has been well known to the district and even intuitive to the community. What the academic team, led by Associate Superintendent Ann Smisko and Chief Academic Officer Darlene Westbrook, is stressing, however, is that you can drill down into this data to pull out intervention strategies on campuses. For too long, test scores and school data have been difficult to interpret and, even more important, difficult to act upon at the campus level. To know Latino students on your high school campus are failing is one thing, but to know specifically that a Hispanic student on your campus is failing the math portion of the Texas Assessment of Knowledge and Skills test possibly because of sporadic attendance during the spring sem­ester of his freshman year is another thing. This kind of data, when used properly, can both drive interventions down to the student level and provide benchmarks for progress.

Out of this data, the Austin school district is crafting high school redesign projects. The toughest challenges – Reagan, Travis, John­ston, and LBJ – came first. They will be followed, next year, with plans for the district's west-side high schools. Campus strategies will be tailored to the needs of the individual campus.

Johnston is in its fourth year of low performance under the state's accountability system. Education Commissioner Robert Scott could choose to close the campus at the end of this year. Paul Saldaña, a key community leader providing support to the flagging John­ston High, said the problems there should have been apparent to district leaders years ago and needed interventions both in the feeder pattern and with the challenges associated with the district's burgeoning population of English as a second language students. The challenges at Johnston right now were years in the making, Saldaña said. "It's unfortunate that it's come down to the 11th hour to try to address the issue," he said. "We should have taken measures years ago before we got to this situation."

Part of AISD's intervention strategy has been to bring in consultants to revamp the district's ESL curriculum. The district also has issued strategic reports to address challenges in both the elementary and middle schools. Intervention needs to happen in AISD, Saldaña said, and it needs to happen quickly. Flagging test scores at a number of Austin high schools could put the district in the crosshairs of the accountability system, which continues to ratchet up standards.

"This year you have Johnston," Saldaña said. "Next year you could have Travis or Reagan, maybe even LBJ or McCallum. All of those schools are in the same situation as we are. They could be the next Johnston High School."