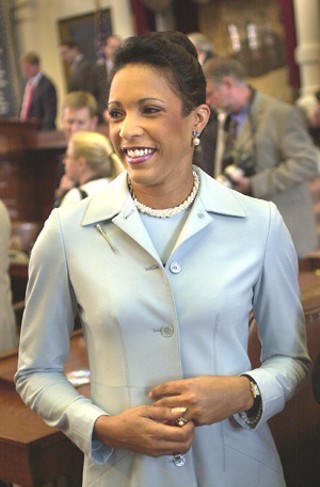 Dukes is the only Democratic House member on the Joint Medicaid Reform Legislat­ive Oversight Committee. But she was absent when the eight-member body held its first interim meeting Dec. 6. Scandal erupted two days later when Matt Glazer, editor-in-chief of Texas politics news blog Burnt Orange Report, was vacationing at Bally's Las Vegas Hotel & Casino. He was surprised to see Dukes there playing the slots. He took a photo, quickly posted it on his website, and said she had "skipped the hearing for a junket to Las Vegas."

Dukes spokesman Colin Strother called the criticism "a fabrication, and the posters know it." While the committee meeting was on Thursday, the photo was actually taken on Saturday, Dec. 8. Dukes was in Las Vegas because she had broken from her return trip from a National Conference of State Legis­lat­ures convention in La Jolla, Calif. Explaining why Dukes was in California watching former White House Chief of Staff Leon Panetta talk about the "evolving state-feder­al partnership" rather than in Austin trying to fix Medicaid, Strother said it was an unfortunate but unavoidable timetabling mishap. The committee chair, Sen. Jane Nelson, R-Lewisville, had scheduled the meeting without the normal process of polling members to see if they would be available. Both Dukes and Sen. Judith Zaffirini, D-Laredo, had prior commitments, so they missed the meeting. The NCSL confirmed Dukes attended the convention. Strother said he asked Glazer to correct the report and said, "Her weekend is hers to do with as she pleases, just like any other Texan."

But Glazer questioned her priorities and added, "She is the sole House Democrat on the Medicaid Committee, and she wasn't there."