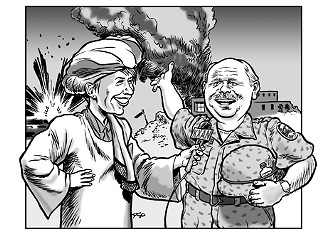 At the height of the key November sweeps period, KXAN rolled out a weeklong series of features from reporter Jenny Hoff, who had traveled to Afghanistan in search of local stories. Her head covered in traditional garb, Gunga Jenny earnestly reported on former Austin Police Chief Stan Knee, Texas soldiers, and a "village trying to get by with no amenities to speak of," suggesting the horrors of a world without granite countertops and flat-screen TVs.

While it's certainly worth pondering why the local NBC affiliate launched its new era as "Austin News" by reporting from Afghanistan, at least the station was trying to make a splash, shaking things up. Rival KEYE, the CBS station, led one sweeps period evening newscast with a report that "patchy fog" was expected the next morning, effectively announcing to viewers, "We got nuthin'."

November was seen as a pivotal month for the stations, with KXAN debuting a new 5pm newscast, new set, and new graphics and KEYE broadcasting in high definition for the first time. It was also the first November book for KEYE's new owners, the lovable pranksters at private equity firm Cerberus Capital Management, who made headlines earlier this year by firing 10,000 people from Chrysler soon after it bought the carmaker.

According to the preliminary ratings numbers, there were no seismic shifts in the local competition, but there was movement – a general tightening of the race. At 5pm, KVUE, powered by the Oprah monster as a lead-in, soundly trounced the competition again, but KXAN's new show finished second, beating both KEYE and Fox affiliate KTBC. At 10pm, KEYE, home to "Judy and Ron" – longtime local anchors Judy Maggio and Ron Oliveira – moved into a solid second place, hinting that the station's own blend of petty crimes, nasty brush fires, and potentially irritating fog is really starting to wow Austin TV audiences.

Beyond the much discussed horse race, the stations rolled out their usual array of sweeps features, the pieces that allow the newsrooms to really strut their stuff. The sprinkling of stories that fell into the realm of "interesting" included KTBC's background check on sports officials and KVUE's "Defender" report on a sleep-deprived 911 operator. But most of the stories displayed the usual well-worn, heard-it-a-million-times feel, highlighted by KEYE's obligatory sweeps report on restaurant health inspections and KVUE's story warning of "the dangers of Internet dating."

Behind the scenes, events were far more interesting, tweaked immeasurably by the drunken-driving arrest of KXAN news maven Michelle Valles, who was popped after leaving an open-bar media party at a Downtown hipster club. Maybe it wasn't shocking news to learn that a member of the media drove home after drinking too much at a freebie party, but Valles' arrest created a wave of angst in all the TV newsrooms. Report it or not report it? Show her haggard but vaguely sexy mug shot? Run ads decrying the alleged drunks reporting the news at the other stations? The Austin American-Statesman had already published a story on the arrest, plus her mug shot, but the stations didn't want to look like they were gleefully mocking a competitor. Even worse, they didn't want to give their competitors any free publicity.

In the KVUE newsroom, there was a lively debate on the topic, according to news director Frank Volpicella. "A lot of people here know Michelle," said Volpicella, who eventually sought input from an ethics expert at the Poynter Institute.

Even genial KEYE morning guy Fred Cantú waded into the debate. "Not running the story gives the appearance that we are perhaps shielding one of our own from public scrutiny," Cantú wrote on the morning show's blog. ("Uncle Fred" seems to be the only local anchor who's willing to blog about news and issues. Actual sample posting from KEYE news hawk Oliveira: "April and October – 2 great months.") Eventually, KXAN and KVUE were the only stations to mention Valles' arrest. "Our benchmark is if someone is indeed a public figure," Volpicella said. Choos­ing to ignore the mug shot in the paper, KXAN opted to let Valles make an on-air statement. "I felt like it was news," General Manager Eric Lassberg said. "And Michelle felt like she wanted to say something."

In her statement, Valles followed the well-trod celebrity mea culpa script, expressing her sorrow at the "anguish" she caused her "family at KXAN and my dedicated viewers." She didn't enter rehab, announce her newfound faith in God, or reveal a childhood molestation, but she did vow to volunteer for Mothers Against Drunk Driving, "to help educate others about the dangers of drinking and driving, a life-saving message that is especially important this holiday season."

Valles' return appeared to give KXAN a small ratings bump, a precious commodity in November. Unfortunately for the local news operations, there was no storm of biblical proportions or local mayhem to compel people to tune in, resulting in lackluster numbers for the sweeps period.

Rumors and other stuff

Rumors are swirling that KVUE anchor Christine Haas, the only newsreader in town with real big-market potential, may be moving on up. Haas declined to comment other than to say she's not going anywhere. "KVUE is my home and will continue to be for a long time to come," she said.

Former NPR.org Web guru Rich Dean, who spearheaded KUT-FM's move into the Digital Age, is leaving the station. He's moving to Los Angeles to join his wife, NPR host Alex Coh­en, who has been working there for the past year. "As much as I love KUT, I love my wife more," Dean said.

Funny, nobody is screaming for Time War­ner to add the NFL Network now that the game of the week is Broncos vs. Texans.

Sean Ross of Edison Media Research lists Austin as the eighth best radio market in the country. He cites eclectic KGSR, the country stations, and two hip-hop stations. Chicago is listed as No. 1. 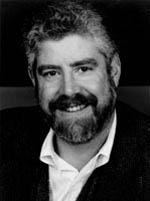