On the science of global climate change, I'm an agnostic. I've seen Al Gore's movie, and I've read reports from the Intergovernmental Panel on Climate Change. I've also listened to the "skeptics." I don't know who's right. Now that Gore has won the Nobel Peace Prize, it seems that – at least for now – the skeptics are losing the public-relations war. Whatever. For me, in many ways, the science no longer matters, because it has become so rancorous and so politicized. The pro-Gore faction insists the anthropogenic debate has been "settled," that no additional discussion is needed, and that anyone who questions the IPCC or Gore must be employed by Exxon Mobil Corp. or the coal lobby. The anti-Gore faction says the current period of warming could be the result of the natural variation in the weather cycle, sunspots, or any number of other things.

Again, I no longer care much about the science. To me, the central question, and the one that few are willing to discuss in depth, is: Then what?

That is, if political leaders agree with Gore and others who believe too much carbon dioxide is bad, then what are we going to do? Fossil fuels now provide about 85% of the world's total energy needs. Even more important is this corollary: Increasing energy consumption equals higher living standards. Always. Every­where. Given that fact, how can we expect the people of the world – all 6.6 billion of them – to use less energy?

There are three main issues to be addressed: technology, morality, and the scale of global energy use. First, technology: When asked what needs to be done to slow carbon-dioxide emissions, one of the first answers is, "We'll use energy more efficiently." While increased energy efficiency is a wonderful thing, it won't necessarily result in lower energy consumption. That consequence has been proven repeatedly since 1865, when William Stanley Jevons, a British economist, published an analysis of energy-consumption trends. In describing what is now known as the Jevons Paradox, he wrote: "It is wholly a confusion of ideas to suppose that the economical use of fuels is equivalent to a diminished consumption. The very contrary is the truth." The paradox is illustrated by recent energy-consumption trends in the U.S. Since 1950, the amount of gross domestic product produced per unit of energy consumed has doubled – and yet during that same time span, energy consumption in the U.S. has risen threefold. Numerous other examples are available.

The other common answer to the problem: Use more wind and solar power and more biofuels. Wind and solar are lovely (I have 3,200 watts of photovoltaic panels on my roof), but they are incurably intermittent. Until there is a major technological breakthrough that can store large amounts of electricity, that intermittency will severely restrict the ability of wind and solar to provide much more than single-digit percentages of the world's electricity needs. We use fossil fuels precisely because they have very high energy density – that is, they contain lots of heat energy in concentrated form; wind and solar do not. And even should there be a major breakthrough in wind and solar, Vaclav Smil, a distinguished professor of geography at the University of Manitoba who has spent most of his career writing about energy, warns, "Energy transitions span generations and not, microprocessor-like, years or even months: there is no Moore's law for energysystems." (Moore's law, after Intel co-founder Gordon E. Moore, refers to the historical tendency of computing components to double in capacity every two years.)

As for the promise of biofuels: Forget it. The outrages of the corn-ethanol scam and the many deleterious effects of biodiesel production are well-documented. As for the hype about the ever-receding commercial production of cellulosic ethanol: Believe it only when you see it.

The second key aspect of the global warming issue is a moral one. Today, 1.6 billion people do not have access to electricity in their homes. Some 2.5 billion people use wood, dung, or other biomass to meet their cooking energy needs. According to the World Health Organ­iz­a­tion, about 1.3 million people per year, most of them women and children, die because of the pollution caused by indoor biomass stoves. Only HIV/AIDS, malnutrition, and lack of clean drinking water and sanitation are greater health threats than the problems of polluted indoor air.

As Fatih Birol, the chief economist for the International Energy Agency, has declared: "Decisive policy action is needed urgently to accelerate energy development in poor countries as part of the broader process of human development. We cannot simply sit back and wait for the world's poorest regions to become sufficiently rich to afford modern energy services. ... Access to energy is a prerequisite to human development."

The developed countries of the world can talk forever about the virtues of solar panels and windmills, but what the energy-poor need most are common fuels like kerosene, propane, and gasoline. And just like us, they want reliable electricity. The people in the industrialized countries have a moral obligation to help the energy-poor get cheap, reliable energy. And it is undeniable that the cheapest and most reliable forms of energy, for now, are fossil fuels.

The final issue is the enormous quantity of energy involved. Consider the world's six most populous countries: China, India, the U.S., Indonesia, Brazil, and Pakistan. The U.S. consumes nearly as much energy as the other five (the Big Five) combined. But according to British Petroleum's 2007 Statistical Review, between 2000 and 2006, America's total energy consumption was essentially flat – at about 17 billion barrels of oil equivalent per year.

The belief that the world can drastically cut global carbon-dioxide emissions at a time when about half of the people on the planet are still living in relative energy poverty borders on fantasy. Moreover, the industrialized countries in general, and the U.S. in particular, have no moral standing from which to tell the developing countries that they should slow the growth of their energy consumption.

Bringing hundreds of millions of people out of energy poverty – and, thus, into higher standards of living – means providing them with access to cheap, plentiful energy. Like it or not, that largely means fossil fuels, and increased use of fossil fuels will mean further increases in carbon-dioxide emissions. The hard truth is that the people of the world are going to have to adapt to a warmer planet – regardless of the cause of that warming. 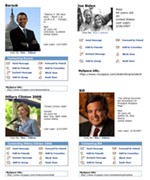 And I Approved This Instant Message
What will page views, YouTube clips, and MySpace friends add up to for Web-savvy Democratic hopefuls?