Return of the Titty Tax

New 'nudity' tax could include not just strip clubs but cabarets, bars, fashion shows, and even mainstream theatres 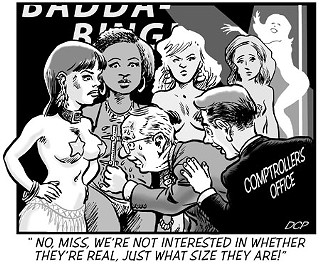 Define "nude." If you think it means no clothes, think again. Now define "sexually oriented business." If you're thinking adult store or topless bar, wrong again. A new admission surcharge, which its Legislature sponsors say is just supposed to affect Texas strip joints, could in fact sweep up cabarets, bars, fashion shows, and even mainstream theatres – while potentially violating both the First Amendment and the state tax code.

House Bill 1751, which takes effect Jan. 1, will charge "sexually oriented businesses" (known in legislative circles as "SOBs") that provide live nude entertainment a fee of $5 per customer. The bill, however, defines "nude" as "entirely unclothed; or ... clothed in a manner that leaves uncovered or visible through less than fully opaque clothing any portion of the breasts below the top of the areola of the breasts, if the person is female, or any portion of the genitals or buttocks." Texas already has a statutory definition of SOB, but the bill extends that to any venue that allows the consumption of alcohol and provides live nude performance. According to First Amendment attorney Arthur Selander, "This would include a theatre staging a performance of Hair."

In 2005 a similar surcharge bill, proposed by the Texas Association Against Sexual Assault and backed by Gov. Rick Perry, would have dedicated the cash to public education, but it was widely ridiculed as "Tits for Tots" and rejected by the Lege. Lawrence Collins, a lobbyist for TAASA, said the association started shopping the idea around again to legislators in the interim, finally getting freshman Rep. Ellen Cohen, D-Houston, to sponsor it in the House. Bill Kelly, Cohen's chief of staff, said that as president and CEO of the Houston Area Women's Center, Cohen had been looking for ways to finance a statewide fund for agencies supporting victims of sexual abuse and bolster the patchwork of coverage that has left 54 counties with no program. The first $25 million per biennium raised by the surcharge goes to the newly founded Sexual-Assault Program Fund, to be split between a variety of state, local, and faith-based agencies. The rest will go into the Texas Health Opportunity Pool, established under Senate Bill 10. Having sexually oriented businesses pay for the programs, Kelly said, was an "apples-to-apples comparison, where an industry that predominantly employs women would benefit victims of a crime that predominantly affects women." He added that Cohen intended the bill to cover only traditional SOBs. "If there's a performance of Shake­speare with a bare breast, we're not going after that," he said. "We're not trying to be the morality police."

But enforcement and interpretation of the law will be left to the state comptroller's office. Bryant Lomax, tax policy division manager responsible for developing the interpretation guidelines, said his office would take "the plain meaning of the words in the statute and [try] to apply them as reasonably as possible." This means the broadest definitions of "nudity" and "sexually oriented business" the bill allows. A venue could be appraised on a night-by-night basis: If a sports bar held a wet T-shirt contest, for example, it would have to pay the surcharge for that one night. When asked if this would include a theatrical performance with nudity as defined by the bill, Lomax said, "By the language of the bill, [it] would." He also said Cohen had been informed of this broad interpretation and agreed with it.

While other tax bills came into effect Sept. 1, this surcharge was deliberately pushed back to the end of the year "to allow the comptroller's office to set good rules under the definitions," Kelly said. This has led to some head-scratching for Lomax's staff members over the interpretation of "nude," as when they were approached by a bar whose waitstaff wear bikinis and asked whether their business would be liable. "We asked questions about what we're talking about when we say 'bathing suit,'" Lomax said. "Are we talking a regular bikini, string bikini, thongs, or spaghetti straps?" The answer, then, would effectively depend on the comptroller's sexually oriented judgment.

While Kelly said he did not expect any First Amendment challenges, Selander warned that the surcharge could violate the freedom of speech clauses of both the U.S. and Texas constitutions. "This is essentially a tax based on the content of expression," he said, "and it will have a chilling effect."

According to tax attorney James Martens, free expression is not the only right potentially violated by this law, and it could breach provisions in the Texas Constitution about unfair taxation. The bill calls the surcharge a "fee," but in Texas a fee must be spent on regulating the industry from which it is raised. Since this revenue would not go to regulation, it should be classified as a "tax" and therefore cannot be restricted to one type of venue providing nude entertainment, such as strip joints. That may be why, Martens said, the comptroller's office is taking such a sweeping interpretation. "If they apply it broadly, they face less of a constitutional challenge," he said.

Brodie Owen, promotions manager for the Yellow Rose club, said this could cripple smaller businesses. "If you're a club that only does $50,000 a month, a hundred customers a day is $15,000 straight out of revenue," he said. "This affects everyone in the industry. Bar staff, managers, waiters, dancers – they have all chosen a legitimate trade. Someone is going to challenge this law. I just hope it's soon."