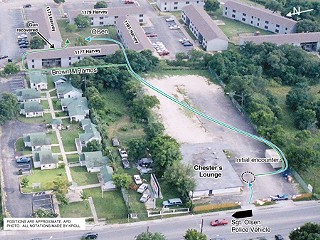 These photos show the paths taken by Kevin Brown, Austin Police Department Sgt. Michael Olsen, and Officer Ivan Ramos from the parking lot at Chester's Nightclub, over the back fence, and into a nearby apartment complex, where Olsen intercepted Brown's flight and shot him twice in the back – first as he turned to run away and again when he was on the ground ("X" in photo below). Brown had apparently dropped the handgun he was carrying before he reached the courtyard and was unarmed when he was shot. APD Chief Art Acevedo terminated Olsen, ruling that he had failed to use "common sense, good judgement, and proper police tactics" and that the shooting was unjustified.
Download a larger image

On Nov. 28, Austin Police Chief Art Acevedo handed Sgt. Michael Olsen an "indefinite suspension" (the civil-service equivalent of termination) for the fatal June shooting of 25-year-old Kevin Brown. Following a disciplinary review board meeting at Austin Police Depart­ment headquarters last Wednesday, during which Olsen answered questions about his conduct for Acevedo and others in his chain-of-command, Acevedo issued a 10-page memo describing the shooting as a consequence of Olsen's "failure to follow his training and his failure to exercise common sense and good judgment." According to Acevedo, Olsen made a string of bad decisions in confronting Brown, ultimately culminating in an "avoidable" escalation to deadly force.

Flanked by members of his executive team and Olsen's chain-of-command officers outside APD headquarters, Acevedo addressed a group of reporters. "Let me start by saying, this day is a tragedy for the community," he began, "for Kevin Brown and his family, for Sergeant Olsen and his family," and for APD. While we've "got to teach kids, our young people" that running from the police is never a good idea, Acevedo said, the onus was on Olsen to accurately assess and appropriately react to the situation as it unfolded on June 3. Olsen's "tactics leading up to [the shooting] were problematic for us and played a role in this tragedy," he said. "I think everybody has lost a little bit this afternoon." 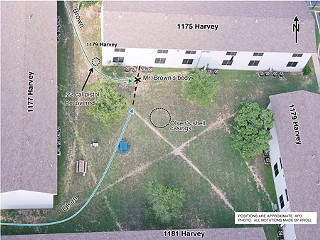 In his decision memo, Acevedo recounted the shooting and its context in considerable detail. Kevin Brown died from two gunshot wounds to the back, fired by Olsen in the early morning hours of June 3, in the courtyard of an Elm Ridge apartment complex on Harvey Street, near the now-defunct East 12th Street after-hours club, Chester's Nightclub. Alerted to a possible concealed weapon by a club staffer, Acevedo noted, Olsen called for nearby backup (Officer William Norrell), but instead of waiting for Norrell to arrive, Olsen approached Brown and, sensing danger, decided to go "hands on." Brown pulled away and ran off through the parking lot, slipped through a hole in the fence, and made his way onto the property of the neighboring apartment complex. Olsen and his partner, Officer Ivan Ramos, followed, but Olsen broke away from his partner in an attempt to cut off Brown's flight. Olsen emerged into the courtyard opposite Brown, whom he said he saw fidgeting with the right side of his waistband, presumably groping for a weapon.

Olsen never saw Brown with a gun and never saw his hands, but he told APD investigators that he was "100 percent sure" that Brown was in fact armed and that Brown had a look in his eyes "like he's just going to try to kill me." Olsen raised his weapon and fired two shots; one caught Brown in the back and dropped him to the grass, where he lay prone. Olsen said Brown was still fidgeting at his waistband and that he still feared for his life; he shouted for Brown to show his hands again, then fired two more shots, nailing another round into Brown's back.

Brown died at the scene. No weapon was found on him, although police recovered a .22 pistol less than 30 feet away.

Ultimately, in Acevedo's opinion, Olsen's failure to use "common sense, good judgment, and proper police tactics" began almost immediately after he decided to check out the report of a patron carrying a gun. That decision accelerated a chain of events that culminated in the unjustifiable use of deadly force against a civilian. Olsen first erred, Acevedo noted, by failing to wait for backup. "This was an especially poor decision since there were only two officers [present] and several hundred potentially intoxicated and unruly people outside the club that might turn on the officers if they tried to arrest Mr. Brown," Acevedo wrote.

Olsen was obligated to check out the citizen complaint, but Brown was simply standing in the parking lot talking with others and not doing anything that required Olsen to take immediate action. Although Olsen said he felt threatened and that he was sure Brown was armed, Acevedo noted that Olsen did nothing to defend against a potential use of force: He didn't employ any tactic to cover himself from possible gunfire and, by focusing on Brown's eyes instead of his hands, failed to properly assess the situation. "It is unreasonable to think that an officer can use deadly force because of the look in someone's eyes," Acevedo wrote.

Ultimately, reviewing the facts in a light most favorable to Olsen's version of events, Acevedo concluded that it is "conceivable" that an "ordinary and prudent officer" might have "perceived a threat that justified" firing the first round of gunshots. However, he said, there is no justification for the "second volley" that Olsen fired after Brown was already on the ground. There were "insufficient facts" to suggest that Brown was actually an "immediate threat" – in part, Olsen's account that Brown continued to fidget with his waist while wounded in the grass was disputed by Officer Norrell, who arrived in the courtyard shortly after Olsen fired the first round of shots; he told investigators that both of Brown's arms were actually "underneath his body." ("It is also important to note that Officer Norrell did not feel the need to shoot at Mr. Brown after he went to the ground," Acevedo added.) Olsen justified firing the second round of shots by saying that he was left in the open and vulnerable to an assault without any cover, but Acevedo wasn't impressed: Olsen "fails to understand and acknowledge that even if there was no cover available to him, it was his poor decision making and unsafe police tactics that put him in that position."

During the lengthy disciplinary review hearing, Olsen told his superiors that he'd reviewed the investigative file and believed that his decisions on the night of June 3 were correct and said that he "wouldn't slow down, even after knowing that he shot a citizen who was not armed at the time that he pulled the trigger," Acevedo wrote. "These statements are extremely troubling because it leads me to conclude that ... Olsen does not understand the errors he made, nor will he change his behavior in similar situations in the future." (Acevedo noted that in reaching his decision to terminate Olsen, he also considered the officer's disciplinary history, which includes a 60-day suspension for lying in connection with a use-of-force incident on Sixth Street.)

In sum, Acevedo concluded, "When an officer violates policy, and that policy violation(s) result in the death of a citizen, indefinite suspension is warranted. Consequently, I believe it is in the best interests of the Department, the City of Austin, the citizens we are sworn to protect and serve, and Sergeant Olsen himself, that he be indefinitely suspended."

Attorney Adam Loewy, who is representing Brown's family in a federal civil-rights lawsuit against Olsen, applauded Acevedo's decision, which he said confirms that family's assertion that excessive force was used that night that "could have been avoided." Olsen's attorney, Jason Nassour, was reportedly not pleased with Acevedo's decision. Although he did not return a call requesting comment, Nassour told the Austin American-Statesman that the chief is a "coward" and made his decision not based on facts but based on his desire to be "liked."

Olsen will appeal Acevedo's decision to the three-member Civil Service Commission, Nas­sour told the daily. Unlike an appeal to an independent arbitrator, whose decision is final and binding, an unfavorable ruling by the CSC can be appealed to district court. While a court appeal would offer Olsen the chance to present additional evidence in support of his case, the judge is required to give deference to the CSC opinion and may only deviate from its judgment by finding that there is less than "substantial evidence" to support Olsen's termination. (Since the arbitration option was added to state law in 1987, very few Austin officers have chosen to appeal their disciplinary sentences to the CSC.)

Related documents:
Memorandum from Citizen Review Board to Chief Acevedo