AISD Scrambles for Another Bond Election 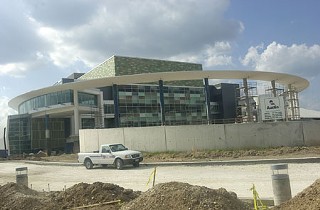 Long Center for the Performing Arts (Photo by John Anderson)

Less than four years after its last bond issue, the Austin Independent School District is considering another bond election for next May that could mean up to $200 million in what the district describes as new urgent funding for local schools. In 2004, Austin voters approved $519 million in school bonds, but according to AISD facilities Executive Director Paul Turner, changing circumstances in the district demand an interim issue. "If it's something that can wait, we'll put it in the parking lot until next time," said Turner. "We're looking at things that require immediate attention."

Since October, the 21-member volunteer Citizens' 2008 Bond Advisory Committee has been considering proposed projects, mostly driven by essential repairs, swelling student numbers, and changing curriculum requirements. If successful, this bond issue could solve immediate demands and push back the next major issue from its currently proposed date of 2010 by two years. This time, the committee is only looking at programs it classifies as sufficiently urgent not to be postponed. "The way we're approaching this is: What are the consequences of us not making a decision?" said committee tri-Chair Geronimo Rodriguez.

The largest proposal is the potential construction of additional elementary schools and perhaps a junior high to alleviate significant overcrowding. Several schools have been evaluated as being over 125% of capacity, although the committee is still waiting for a final demographer's report, expected in early December. "There's population growth and population movement," said tri-Chair Mark Curry, "so there's a need to consider where you might build those schools, so you can reset boundaries and balance that load."

Some of that need for new schools could be offset by adding classrooms and staff to existing schools, and recent curriculum changes have created an immediate demand for science labs. Starting with the 2007 freshman class, Texas high school students are required to take four years of math and science to graduate, and some of the money could go for extra lab space. New classroom construction costs could total more than $100 million, but tri-Chair Amy Wong Mok stressed that the need is immediate. For example, Linder Elementary, designed for 600 students, now houses more than 900 and starts serving lunch at 10am to fit them all in. "Those children can't wait any longer, because they'll be in high school by the next bond," she said.

Extra upfront cash could also be requested to allow new facilities to integrate green-building techniques, including innovative heating and cooling systems, thereby cutting energy consumption long-term. The committee is considering investing in capacitors for the electrical system (which could save the district more than $1 million annually in utility bills), as well as the continuing replacement of the aging bus fleet for less polluting options. "There's a big discussion there, judging hybrids against reduced-emission diesel," said Rodriguez.

One big-ticket item that may not seem as urgent as the mandated classroom construction projects is a new districtwide performing-arts center for high school and junior high students. In 2004, residents voted 2-to-1 to approve $7.7 million for a similar project on or near the McCallum High campus, but that project was dependent on matching private funds that never materialized. According to Curry, the committee considers the 2004 vote a sign the community backs the concept, but the old bond proposal has expired – so the committee negotiation process resumed from the beginning. "We're discussing the need for a performing-art center against where to put it," said Rodriguez.

One alternative under consideration is to house the PAC at the new Long Center for the Performing Arts, under construction on Riverside. Proposals for the center originally included the 700-seat Topfer Theatre, but this plan was put on hold due to funding shortfalls. The committee is considering funding a mixed-use space available to both AISD and the center, and Long Center management welcomed the idea. "We're standing here with open arms should AISD decide we're the right choice," Long Center Executive Director Reynolds Redd Jr. said.

The next big step is the demographer's report, due Dec. 1. This will give the committee exact student numbers from which they can gauge the pressure on classroom capacity. They plan to make their recommendations to the AISD board of trustees by Jan. 28, which should allow for further public consultation. To reach the May ballot, the board must adopt the proposals by March 7. The citizens' committee will be accepting any additional public proposals for projects until Dec. 4: Urgent proposals might be added, while those of a lower priority will be held over until the next major election. "The one procedural issue we all understand is that we're on a compressed time schedule," said Rodriguez, "but we want to make sure that we are as transparent and accountable and open as possible."

• March 7: Deadline for board adoption of bond proposals