Hemp Farmers to DEA: Butt Out 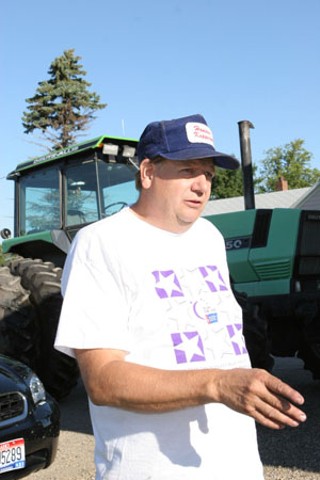 Rest assured, the Drug Enforcement Agency is fair. Seriously. At least when it comes to deciding whether to allow individuals to cultivate industrial hemp, as two farmers from North Dakota – Dave Monson (also a veteran Republican state lawmaker) and Wayne Hauge (also a certified public accountant) – are seeking to do. At least that's the assertion offered by U.S. Department of Justice lawyer Wendy Ertmer, representing the DEA at a federal court hearing Nov. 14 in Bismarck, where she insisted before U.S. District Judge Daniel Hovland that the agency's "administrative process" for granting the permits to grow the crop is, in fact, "not futile."

Of course that doesn't mean the judge was particularly impressed by that assurance. Indeed, Monson and Hauge were in court to defend their right to seek a declaratory judgment telling the DEA to butt out of their plans to grow the nonnarcotic hemp plant – the cousin of that evil weed marijuana – in compliance with new state law regulating the cultivation of the environmentally friendly rotation crop. The DEA says industrial hemp is nothing more than dope and that the agency has the right, under the federal Controlled Substances Act, to enforce marijuana prohibition and decide when, where, and if an individual is allowed to grow any form of the plant Cannabis sativa L. (See "Reefer Madness," Aug. 24). The judge heard arguments from both sides and now must decide whether to grant the DEA's motion for dismissal. In part, Ertmer's argument relies on the idea that the farmers don't have standing to ask the court to intervene based on the notion that the DEA has not yet decided whether to approve the applications each farmer filed in February. Notably, the DEA hasn't dropped the slightest hint of when it might decide – a pretty big deal given that the permits must be renewed annually (along with a nonrefundable $2,000-plus fee). Moreover, the agency's track record doesn't exactly inspire confidence: Still pending before the narcos is a 1999 application from North Dakota State University to grow a research crop. Given the totality of circumstances, the court didn't appear to buy Ertmer's vision of fairness: "I don't see any realistic prospect that [Monson and Hauge] are ever going to be issued a license," Judge Hovland told Ertmer. "It doesn't matter what ... responses they provide to the DEA," he continued. "The DEA is going to be hard-pressed to grant a license in this case, probably the first case ever in the country where they've granted a license to a private grower of industrial hemp, so ... I mean, I think we can all sit here and agree that it ain't going to happen."

While the DEA may have lost its argument on standing, the farmers aren't completely out of the woods in their bid to knock the DEA out of the hemp-growing loop. At the core is whether the federal law can be interpreted to exempt hemp from the definition of marijuana. North Dakota is the first state in the union to enact a hemp-farming statute, allowing qualified farmers to receive a state license to grow the crop. Farmers have their applications vetted by the state's agricultural department and must satisfy several requirements: They must pass a criminal background check; agree to use only seeds that contain less than 0.3% tetrahydracannibinol, or THC; must provide geo-positioning coordinates for their hemp fields; and must agree to random, unannounced inspections. The law is patterned after the successful 1997 Canadian hemp law, which kick-started widespread cultivation – much of which, ironically, is imported to the U.S. in the form of seed and oil and turned into various consumer products; it's an industry that is growing annually by double digits. To the high plains farmers, cultivating industrial hemp is no more controversial than growing soybeans, canola, or wheat – but is far more promising as a cash crop. As it stands, the U.S. is the only developed country without an established hemp crop. (Ironically, much of the Canadian hemp is grown in Manitoba, just 12 miles north of Monson's eastern North Dakota farm.)

To the DEA, the legal questions before the court are clear. Marijuana is marijuana, even if it is nonnarcotic hemp. As Ertmer argued in court earlier this month, "The definition of marijuana is clear on its face. It doesn't matter that North Dakota has given plaintiffs a license [to cultivate] what the [state] statute refers to as industrial hemp. It's still marijuana for purposes of federal law." Ertmer concedes that federal law exempts from regulation the mature stalks, fiber, oil, and seed of the cannabis plant but says that while the exemptions "may allow certain plant components to be imported into the United States," it doesn't "change the fact that Congress did regulate the growing marijuana plant. That Congress chose not to regulate certain potentially more innocuous components of the plant says nothing about Congress' intent to regulate the entire plant." Ertmer said in similar cases – notably involving hemp cultivation on South Dakota's Pine Ridge Reser­vation by members of the Lakota Nation – the courts have not found that hemp is an exempt subset of cannabis when it comes to cultivation. Monson and Hauge's lawyer, Joseph Sandler, disagreed, noting a distinct difference between the North Dakota case and any other. Here, he said, the state has defined a strict set of rules that apply to cultivation – rules that ensure only nonnarcotic hemp is grown and only the exempt portions of the plant would ever make it into the marketplace. "We submit [that given the] unique nature of this state regulatory regime ... federal regulation of drug marijuana cannot be extended so far as to cover the [intrastate] cultivation of industrial hemp under this state regime," Sandler argued.

The judge stayed a motion filed by Monson and Hauge seeking resolution of the case in their favor and "promised" to decide before month's end whether to grant the DEA's motion to dismiss.

See this column at austinchronicle.com for a transcript of the court hearing.