Complexity of Wal-Mart case, not to mention Thanksgiving, could delay judge's decision 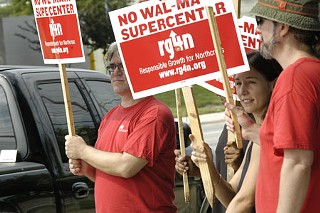 After an eye-glazing three days of discussions about the meaning of city legal codes, methods of tree preservation, traffic-impact analyses, and especially flood-drainage engineering, defense attorney Casey Dobson began his closing arguments by saying, "In about half an hour ... I'm going to go have a beer, and it's not gonna be with a drainage engineer."

So there was at least one thing everyone at the Northcross/Wal-Mart trial (except perhaps the drainage engineers who testified) could agree on.

What the two sides disagreed on ­was the city of Austin staff's interpretation of legal development code. The opposing arguments, boiled down to the bones:

Responsible Growth for Northcross, an activist group attempting to stop Lincoln Property Co.'s plans to put a Wal-Mart Supercenter on the former Northcross Mall location, focused on legal code language centered around phrases such as "will" and "shall" – words that RG4N says limit the amount of flexibility staff has in interpretations and prove that staff didn't carry out due diligence when it approved Lincoln's site plan in 2006. Travis Co. District Judge Orlinda Naranjo should void the entire site plans, RG4N attorneys argued – which would force new plans to be submitted under the city's Big Box Ordinance, a law passed earlier this year requiring that proposed stores over a certain size be subject to City Council hearings.

The city – represented by Dobson and firm Scott, Douglass & McConnico, to the tune of almost half a million dollars – and Lincoln argued that RG4N wanted staff to interpret city code with a "bloodless literalism" not required by law, which would deprive the city's professionals of the discretion necessary to make reasonable judgments. Dobson also argued that case law dictates that Naranjo keep her decision very limited in scope, with a proper amount of deference given to the competence of city staff. RG4N, he claimed, was asking Naranjo to decide which set of experts was superior – theirs or the city's. "The court should not substitute its own judgment for the city's," Dobson said, unless the city's conduct was "so out of bounds that it acted arbitrarily and capriciously." Dobson also argued against RG4N's requested remedy, should it prevail. Rather than completely toss out a site plan for a few errors, he said, the city usually allows mistakes to be corrected. "Site-plan reviews are not a game of 'gotcha,' to deny applications," Dobson said.

An enormous amount of testimony focused on floodwater drainage across the Northcross property onto Northcross Drive, which under current conditions will be under 6 inches of water in a 100-year flood event. RG4N lawyer Doug Young pointed to ordinance language stating that, in a new development, "Rainfall runoff shall be held to the amount existing at undeveloped status by use of ponding or other approved methods." Lincoln's site plan does not provide a required dedicated easement adequate to convey this 100-year floodwater, Young said.

Lincoln attorney Bruce Scrafford of Arm­brust & Brown countered on two points. One, this is not a new development; it's a redevelopment, so his client is not obligated to build such an easement (Young fired back that the law makes no exceptions for redevelopment). Secondly, he got RG4N witness Lauren Ross – drainage engineer for the city of Sunset Valley and a frequent player in Austin water fights – to admit that, overall, Lincoln's site plan would have less impervious cover than the old Northcross, more water-quality controls (the site currently has none, she said), will probably send less pollution into Shoal Creek than it currently does, and will have more storm-water retention. The city's lawyers claim that by "undeveloped status," the law's authors meant the condition at the time a developer files an application, not a reversion to the conditions back when the block was green pasture. Austin drainage engineer Benny Ho added in other testimony (italics ours): "The Texas Water Codes specifically state that if there is existing inundation, that the proposed development cannot produce additional adverse impact downstream." And, "city codes specifically call for no increased inundation in the event that we approve a site plan."

On traffic questions, RG4N co-counsel Brad Rockwell asked whether George Zapalac, the development services manager at the city's Watershed Protection and Development Review Department, had considered the public-safety effect those cars would have when combined with those floodwaters or if he considered the health or climate-change effects of the extra pollution. No, Zapalac replied, because those types of considerations are not part of a traffic-impact analysis. While there may be other city staff who work on those problems, they are not within the scope of his job or the scope of a traffic-impact study, he said.

RG4N noted that the "accessory use" status sought by Wal-Mart for the garden center requires that it take up no more than 10% of the supercenter's square footage – otherwise, Wal-Mart must seek a "conditional use" permit, which would trigger public hearings. RG4N's Paige Hill said she measured garden centers at the Ben White and Four Points Wal-Marts and found them to be well over the 10% line, which led Rockwell to assert that Wal-Mart would simply do the same at North­cross. Assistant City Manager Laura Huff­man's response: If the garden center violates city code, there is a process in place to file a complaint and seek a remedy.

On the final point of the city's Tree Ordinance, RG4N pointed to language requiring at least the consideration of possible design alternatives that might save 11 trees that fall into the "protected" class (a circumference of 60 inches or greater), and Rockwell pointed to deposition testimony by city environmental review specialist Betty Lambright that she had never pressed for such a redesign. Lambright replied, "I am not reviewing in a vacuum" and must evaluate multiple factors in a site plan. She said she was impressed that the plan reduces impervious cover from 95% to 87% and that Lincoln will plant a wider variety of new trees other than the existing live oaks. "More diversity is good for the urban forest," Lambright said. "A monoculture is not good. You get a case of oak wilt, and all the trees are gone."

Rockwell cited city provisions requiring tree-preservation efforts to retain the "existing natural character" of a development site. But Lambright disagreed with Rockwell's definition of that phrase: "We looked at the site overall, its existing character," she said. "It's a mall. The trees are landscape trees planted in the Seventies," not naturally occurring ones.

That flummoxed Rockwell. "Northcross has no natural character?" he asked. No, she replied. "Mature live oaks are not natural?" he continued. "To me, 'natural' is 'undeveloped,'" Lambright said. "So the mall is natural, and trees are not?" asked an amazed Rockwell.

Naranjo said that due to the complexity of the case and the upcoming holidays, she would need plenty of time to review testimony and evidence and warned not to expect a decision until sometime in mid-December.