Messy Investigation of a Mess

Did Austin Police Sgt. Michael Olsen use excessive force when he shot and killed 25-year-old Kevin Brown? According to Internal Affairs, the answer is "inconclusive." 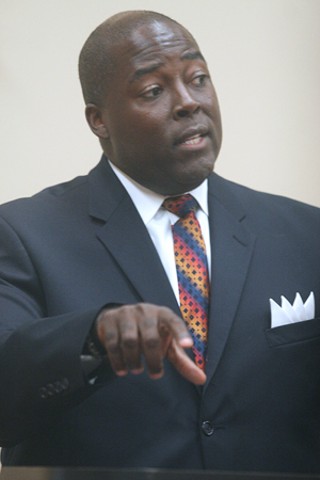 Did Austin Police Sgt. Michael Olsen use excessive force, in violation of department policy, when he shot and killed 25-year-old Kevin Brown in the early morning hours of June 3?

That is among the questions an administrative investigation conducted by Internal Affairs detectives is expected to answer – but according to a Nov. 13 memo from Police Mon­itor Cliff Brown to City Manager Toby Futrell, IA has apparently decided the answer to that crucial question remains "inconclusive." As such, Brown suggested an outside review of the IA inquiry might be in order. In an e-mail response Futrell concurred, but what might have been an ordinary and uneventful recommendation has sparked the ire of the Austin Police Association (and Olsen's attorney Jason Nassour), which argues Brown's memo disclosed investigative information protected by civil-service law and, moreover, that Brown had no authority to request a review before the case was heard by the Citizen Review Panel. In short, it appears the investigation into the Brown shooting could likely become what no one wanted: a political brawl that threatens to undermine both public and police confidence in the outcome.

"What we've said from day one is let the process work," APA President George Vanderhule said. "Now [the city] has totally politicized everything."

Brown pulled away and ran from Olsen, apparently to avoid being searched for a weapon, in the parking lot of the now-defunct Chester's Night Club, in the early morning hours of June 3, after a security guard tipped Olsen that Brown might be packing. Brown ran, hopped a fence, followed a path around the perimeter of a neighboring apartment complex, and wound up in a courtyard, where Olsen intercepted him. Olsen says Brown was fidgeting with his waistband (presumably where he'd stashed the gun) and that he hollered for Brown to show his hands. Brown didn't comply, Olsen said in a statement to investigators, so he fired his weapon, striking Brown in the back. Brown fell facedown on the grass. Olsen said it appeared Brown was still tugging at his waistband, so Olsen fired again. Brown died.

That, in a nutshell, is what happened in the early morning hours of June 3. Why it happened and, perhaps more importantly, whether Olsen's show of force was justified as a matter of APD policy is another story – one that, apparently, APD's IA investigators can't quite figure out. In his memo to Futrell, Brown wrote that in a "verbal briefing" last week "concerning the conclusion" of the IA investigation, he was advised that IA "will recommend to [APD Chief Art Acevedo] a finding that ... Olsen's tactics leading to the encounter did violate APD policy" but that investigators "plan to recommend a finding of 'inconclusive'" as to whether Olsen's decision to fire at Brown was a justified use of force. Based on these "facts and circumstances," Brown wrote, it is his "belief that an independent review of these findings is in the best interest of the community."

"I believe that an independent review will provide a measure of transparency that will increase the community's trust and confidence" in APD, he wrote. And that is what he recommended Futrell should do – "as provided" in the city's employment contract with the police union, he wrote.

Futrell concurred, "authorizing an independent review" of the "thoroughness and appropriateness of [IA's] investigatory techniques, analysis and conclusions regarding the Kevin Brown shooting," she wrote in an e-mail response. Futrell also wrote that consultants with Kroll, which has extensive experience with "police reform matters" (including acting as independent monitor for the Los Angeles and Detroit police departments), would lead the review, which she expected would be on her desk, complete, by Nov. 27 – only three days shy of the 180-day deadline Acevedo has under state law to decide whether Olsen should face any discipline, including, notably, whether he should lose his job.

The problem with Futrell's decision, says Vanderhule, is that it violates the police meet-and-confer employment agreement, signed back in 2004. That agreement lays out the powers of the police monitor's office and the procedures related to outside investigations – notably, he said, the contract does not allow the monitor to request an outside review independently. That power is reserved for the police chief, the city manager, and, importantly, for the seven-member Citizen Review Panel, which reviews the IA investigation before members vote either to accept the IA conclusions and to recommend discipline to the police chief or to recommend an outside investigation or review. (The panel can also vote to do nothing.) In the Olsen case, Vanderhule says the city has completely trampled the police contract, first in bypassing the CRP – slated to review the case on Nov. 15, only two days after Brown penned his memo to Futrell – and, second, by failing to redact Brown's memo, removing the information related to the contents of the IA investigation, which are protected from public disclosure unless and until Acevedo imposes discipline.

"It's a meet-and-confer agreement," Vanderhule said. "We have to meet [with the city], confer, and we have to agree to the provisions in that contract. That's why it's not called rock, paper, scissors" – that is, it isn't an agreement the city can make up as it goes along.

City spokesman Gene Acuña argues the city did no such thing. There isn't anything in the contract saying the police monitor can or can't request such a review – but that is meaningless, he said, because ultimately it was Futrell who authorized the review, which is well within the scope of the contract. "I think the thing to point out is that Brown simply requested it, but it was Futrell that authorized this."

Brown insists there is "not a question" here that he is allowed to recommend an outside review – and he says he believes it is in the best interest of the community – police included – to do so now, before the 180-day deadline passes. "The bottom line is that I don't do something willy-nilly, without legal advice," Brown says. (Acevedo could ask Texas Attorney General Greg Abbott for a deadline extension, which was common practice under former Chief Stan Knee and which would have allowed the process to unfold naturally, Vanderhule argues. Brown contends the extension is available only when a criminal inquiry is ongoing, and as such, it wasn't available in this case.) Still, Vanderhule says the language of Brown's memo, and of Futrell's response, makes it clear that Brown is the impetus for the investigation, and that is outside the scope of his power. The APA's board of directors agrees and has voted unanimously to file a grievance with the city, seeking redress for the allegedly extra-contractual action.

The failure to redact Brown's memo was a mistake, according to the city. But while it may seem at first a minor slip, it is one that has become a flash point and that threatens to derail what has been, to date, the most civil investigation into a police shooting in recent memory – if ever. "That should never have happened," Brown laments. "And we likely wouldn't be having this conversation otherwise."

Still, he says he thinks that, ultimately, "to have any credibility in oversight or in the Police Department," we have to "vet this thing fully." Ultimately, however, the decision about what will happen to Olsen – and whether he was justified in shooting Brown or not – is in Chief Acevedo's hands.