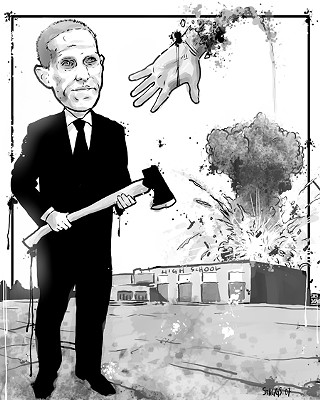 While the Texas Youth Commission is concerned about the quantity of new staff, there are also concerns about their quality. One major hire has already sparked great controversy. Early in October, Brent Rumbo became the new principal at Crockett State School, after passing the new background and fingerprint checks. However, just because Rumbo had no criminal record it did not mean he was free of serious allegations.

Prior to joining TYC, Rumbo was asked to resign as principal of Navasota High School by the Navasota Independent School District following a string of incidents, including claims he had chased students with an axe (a Grimes Co. grand jury no-billed him on that charge). But he was also hit with serious allegations when he was principal of Winona High School in East Texas. On May 17, 2006, a 17-year-old student blew most of his left hand off while tightening the cap on a 2-inch gunpowder-stuffed metal pipe bomb. At the time, Rumbo said the school did not know about the bomb and that explosives were not allowed on campus. However, members of the school community, speaking confidentially, said the school not only knew about the bomb, but that it was part of a physics class. They said Rumbo was aware of these experiments and the construction of a homemade cannon in the same class.

TYC spokesman Jim Hurley confirmed that the agency knew about the allegations but stood by the hiring of Rumbo. "We reviewed them carefully, but there were no charges filed; he was not arrested or indicted. We cannot unhire him on the basis of unsubstantiated allegations," Hurley said.

But even without a criminal record, the Texas Civil Rights Project was concerned about whether Rumbo was qualified to be principal. The post requires five years of classroom teaching experience, and Rumbo counted four years of teaching track as a graduate assistant in college toward that total in his application. "We don't think that would qualify as classroom teaching experience under TYC's own policies," said project attorney Scott Medlock. He said he was concerned that the claims from Rumbo's time at Navasota and Winona had been insufficiently investigated, adding, "These are allegations that TYC has to take seriously, and they seemed to have just taken Rumbo's word for it."