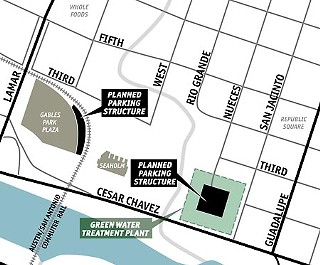 A proposed municipal parking enterprise fund would pay for two new city-owned parking structures – one just west of the Seaholm Power Plant, near the two residential/retail towers of Gables Park Plaza, and the other beneath the existing Green Water Treatment Plant, slated to be dug out of the ground in 2009. The parking plan would tie in to transit and trail initiatives.

"This is a golden moment in the history of Downtown Aus­tin," asserted Council Member Brewster McCracken at last week's Downtown Austin Alliance breakfast. McCracken was presenting his initiative for a new municipal parking enter­prise, which would fund the construction of new city-owned parking garages. Intended to encourage Downtown workers, shoppers, diners, and visitors to park just once – then destination-hop by walking or transit – the parking garages would sport the ground-floor shops, restaurants, and streetscape amenities that keep the urban fabric oh so lively. Financial modeling shows that municipal garages (which would be associated with new developments, providing built-in demand) could be a big profit center for the city, said McCracken, generating significant long-term revenue streams. Under his proposal, the monies would be dedicated to a Trails & Transit Enterprise Fund. That could help solve the pressing problem of how to pay for Downtown's much-desired green infrastructure – e.g., Waller Creek and Shoal Creek trail systems – and new transit – e.g., the modern streetcar system for which Mayor Will Wynn is championing a November 2008 voter referendum.

The concept of a municipal parking enterprise has been in research and development for months at the City Council Land Use and Transportation Subcommittee; members are McCracken, Betty Dunkerley, and Sheryl Cole. At the subcommittee's December meeting, a formal proposal for the Trails & Transit Enterprise Fund is likely to be forwarded to the full council, where it could be taken up before the end of the year.

Kick-starting the initiative would be two major redevelopment projects soon to go live Downtown. The first is Seaholm: the transformation of the 7.8-acre site of the decommissioned power plant (across Cesar Chavez from Lady Bird Lake) into a mixed-use wonderland of affluence. Detailed plans were unveiled before council in February. The project now is planned for 130,000 square feet of offices, 50,000 square feet of retail and restaurants, 60 upscale condos, and a 180-room luxury Seaholm Plaza Hotel – feathered with down duvets and Egyptian cotton linens, we're reassured to know. (See www.seaholm.info/html/project.html). The meatiest developer-funded public benefit is the expensive adaptive reuse of the enormous 1950s Seaholm structure; other public bennies include green open space, extensive landscape architecture, and the infrastructure for a multimodal transportation hub. Council had raised the issue of affordable housing; if any results, it would be funded off-site in the future. Presentation of a Seaholm master development agreement to City Council is imminent; the binding agreement defines what will happen at the site and how the money will flow between the city of Austin and the developers. The Sea­holm redevelopment team is led by Southwest Strate­gies Group; lead principal John Rosato also was involved in Penn Field and the Mueller project. The architectural team includes Design Collective, Susman Tisdale Gayle, and Black + Vernooy. Compared to Mueller – another urban redevelopment project with a significant city of Austin investment – Seaholm has had a less inclusive and transparent master development agreement process. But Rosato, who has made four project presentations to Boards and Commissions in the past month, said, "I think people will be real pleased with what comes out of it." A council vote is expected before year end. (An April 2007 update to the city's Seaholm district master plan is at www.ci.austin.tx.us/downtown/0407/downloads/21-23_seaholm.pdf.) Redevelopment is expected to start next spring and to take a year and a half.

Transit advocate Andrew Clements has expressed concerns that site-development plans do not properly accommodate the rail component of a multimodal transportation hub – long intended for the site. Particularly at issue, he says, is a rail segment known as the "eastern curve," necessary to allow future passenger rail easily to cross the river to Downtown. A schematic transportation diagram shows the Seaholm parking garage as a long, curved structure just west of the train tracks – to be used for a yet-to-be-funded commuter-rail service between Austin and San Antonio.

McCracken expects the parking structure at Seaholm to become the first project of the municipal parking enterprise. Projections show the garage yielding profits to the city of $7.1 million over 30 years. By comparison, 30 years of property taxes from the entire Seaholm site are projected at $7.2 million – tax revenues that the city is waiving as its investment in the project. (As public land to date, the Seaholm site has never generated property taxes.) Developers like the Seaholm team welcome a city-funded parking structure because it lessens the financial drag on their project, said McCracken. Structured parking now runs about $15,000 per space to build, with below-grade parking running $20,000 to $25,000. Because the city can use 20- to 30-year financing structures and has access to tax-free municipal debt, it can get the garage built more economically than a private developer – thus generating juicier long-term profits.

The second imminent site for a municipal parking enterprise project is yet another outdated utility in the Seaholm district – the Green Water Treatment Plant. That prime 6-acre site, between Seaholm and the 2nd Street District, also is being opened for private redevelopment; council will discuss the terms of its request for proposals at its Nov. 29 session. (May it include a new future-oriented site name – too many Greens in this town!) The city will provide roads and other infrastructure to create four new city blocks – heralded as the chunkiest redevelopment opportunity in Downtown history. One site will go to the new Downtown library. (Seems the land is too valuable for the Municipal Court.) An adjacent Austin Energy control center also may move, freeing up more land for boutiques.

Removal of the Green Water Treatment Plant is scheduled to start in spring 2009 and to take a year; as part of remediation, said McCrack­en, the site will be dug out – leaving a pit perfect for a three-level parking structure underground. The city would pay to build it, upfront; the availability of parking would become a compelling value-add for each new project on the site, with users becoming parking subscribers. Plenty of spaces would be available for day use by patrons of the retail and restaurants desired (yet more outlets to buy $200 jeans and eat sushi); ample night parking would serve the whole southwest quadrant of Downtown. The guaranteed tenant base would radically reduce the city's risk, said McCracken. Meanwhile, the city would be fulfilling its public responsibility to ensure that Downtown thrives, and "a permanent funding stream would be created for the future of trails and transit," he explained. A similar parking enterprise has worked successfully to fund transit in Portland, Ore.

McCracken emphasized that city-built parking structures should exemplify public values, particularly the inclusion of ground-floor retail and Great Streets pedestrian-oriented streetscapes. His presentation included slides of "what not to build" – a dead-ugly state of Texas parking garage with nothing on the ground floor – and a "let's do this" image – shops and restaurants topped by several levels of parking, with a lively populated street scene. But when asked whether the Seaholm parking structure would exemplify these public values, he confessed he didn't yet know.

Thanks to the urban-planning efforts of McCracken, Wynn, and the Downtown Austin Alliance, Austin's revitalizing Downtown does indeed seem to be enjoying a golden moment. If the city parking enterprise succeeds, each Austinite can anticipate a personal golden moment, too – the sweet victory of snagging a great parking space Downtown.