Tweet
print
write a letter
Concerned for the health of its employees, the Federal Emergency Management Agency has barred its workers from entering stored travel trailers – the same ones it gave tens of thousands of hurricane evacuees in Alabama, Louisia­na, Mississippi, and Texas to reside in. In Texas, 655 Hurri­cane Rita families are living in 687 of these trailers (down from 4,245 families in the months right after Rita), and an additional 3,275 units are in storage here, said Don Jacks, spokesman for FEMA's Texas Transitional Recovery Office.

The problem is formaldehyde fumes. Trailer-dwellers in Texas began complaining about them around a year ago, said Jacks, although occupants in other states have been expressing concern since at least early 2006. Despite the facts that fumes can cause respiratory and other health problems and that formaldehyde is classified as a carcinogen, manufacturers use it in some building materials. There's a big difference between occupied and stored trailers, however, Jacks said: Without being allowed to ventilate, closed-up trailers are fume factories, but lived-in units are safe – thanks to air conditioning and door and window ventilation – or so the rationale goes. "We're mixing apples and oranges here," Jacks said. "[W]e have FEMA workers all along the Gulf Coast entering occupied travel trailer units daily to perform maintenance. It's only the units that have been closed and are in storage that fall under the 'no entry' order without first being ventilated," he later emphasized in an e-mail.

"Sen. Mary Landrieu, D-La., accused FEMA of using a double standard and said it 'defies logic' that occupied trailers are safer than those in storage," reported the Associated Press on Nov. 8. "I don't really buy that argument," Landrieu said. "It makes no sense, in that most of these [occupied] trailers are closed up and locked during the day."

Hundreds of trailer occupants "are suing trailer manufacturers, accusing the companies of jeopardizing their health by providing FEMA with poorly constructed campers," the AP also reported. Texas' occupied trailers – which are around 8 feet wide and 28 to 30 feet long – are in 16 southeastern counties, the largest concentrations in Jefferson and Orange counties. FEMA hopes to have everyone in Texas out of the temporary homes and into long-term housing by the end of March 2008, said Jacks, adding that the agency is slated to provide emergency housing assistance to evacuees through February 2009.

The stored units, all retired from Texas and Louisiana, are in Jasper. There are about 3,275 of them, "deactivated" for a variety of reasons – some due to formaldehyde concerns but most as a result of tenants moving into more permanent housing; Jacks said "there's no way to tell" how many of the trailers were retired because of formaldehyde. Fumes have been a concern in Texas with about 80 trailer-dwelling families, all of whom were relocated, he said. "There were no formaldehyde concerns expressed in South-east Texas until formaldehyde-related stories began to surface in Louisi­ana and Alabama about a year ago. And up until a few months ago, only eight South-east Texas families had expressed formaldehyde concerns," Jacks elaborated in an e-mail. "These travel trailers were never designed to be long-term housing," he said. 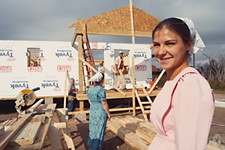