Tweet
print
write a letter
In a surprisingly swift decision, the Texas Court of Criminal Appeals published on Nov. 6 a new rule on its website announcing the court will now accept e-filing in death penalty cases. The move comes only two weeks after nearly 300 attorneys, former judges, and law professors signed on to a petition asking that the court adopt such a rule, allowing for electronic filing of "petitions, motions, and other papers in death penalty cases." They filed the petition with the court in response to the Sept. 25 decision by CCA Chief Judge Sharon Keller to close the courthouse door at 5pm, denying attorneys for condemned inmate Michael Richard a chance to file a final last-minute appeal that likely would have spared Richard's life. Instead, because of Keller's arbitrary decision and because the court refused to allow any e-filing, Richard was executed. (For more on Keller's questionable actions in the Richard case, see "Closing Time? Attorneys Call for Justice's Head," Oct. 19.)

Austin attorneys Jim Harrington, director of the Texas Civil Rights Project, and Chuck Herring, an expert in legal ethics who spearheaded the e-filing petition, were pleased by the CCA's quick action – although they noted it was the least the court could do. "The e-filing is a very small, overdue step, but a welcome step," Herring said in a press statement. "Obviously, it is too late for Mr. Richard, nor does it begin to explain why ... Keller did what she did. However, in the future it may help avoid the specific type of fatal malfunction that occurred in [Richard's] case."

Indeed, Harrington noted that the speed with which the court has acted prompts the question of "why it had not done so earlier and underscores the sad reality" that Richard would "still be alive" had the court acted on its own to address its systemic deficiencies. "This is just one step ... and we will continue to take others of equal magnitude until we have a criminal justice system that Texans can be proud of and one that other states respect," Harrington said. 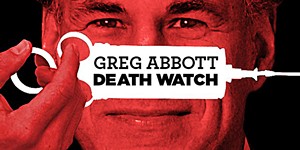 Death Watch: After Appeal Denied, Death Row Inmate to Die
Claims of mental retardation did nothing to stop the state's next execution