Could the Texas House Turn Blue? 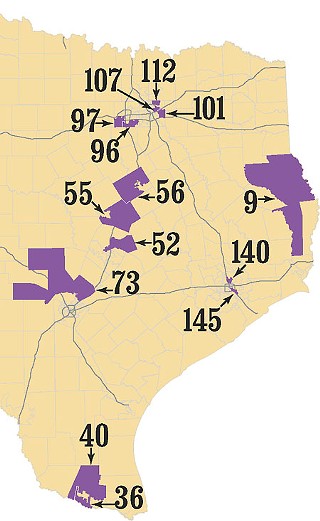 With more than a dozen serious House races in play in both the primary and general elections, Democrats are looking to pick up a handful of House seats in 2008. Some Dem hopefuls are gunning for incumbent Ds (such as Aaron Peña, District 40; Kino Flores, District 36, and Kevin Bailey, District 140), for cozying up to Republican Speaker Tom Craddick. On the GOP side, some candidates are running against incumbent party members for either being too ideologically aligned with the speaker or for breaking from the Craddick pack. Four Republican House members will hang up their spurs this year, creating a free-for-all in next year's races.

With Rep. Kirk England, formerly R-Grand Prairie, having switched parties in September, Democrats approach next November needing to pick up six seats for a state House majority – that is, matching the gain they made in 2006. "Six seats in one cycle is a lot," says Texas Democratic Party spokeswoman Amber Moon, "but it's not out of reach."

The Democratic plan for victory involves building on the party's 2006 successes, especially on gains made in Harris County and around Dallas/Fort Worth. There's an element of letting Repub­lic­ans reap the consequences of their long rush to the right. "A lot of Republicans locked step with [Speaker] Tom Craddick, and that's going to come back to haunt them," said Moon. Several GOP names have already emerged as specific Dem targets: Arlington's Bill Zedler, Tom Latham (Mesquite), and, in East Texas, Wayne Christian (Center). Closest to home, Round Rock incumbent Mike Krusee has a target on his back for his high-profile support for toll roads. Round Rock school board trustee Diana Maldonado has declared her intention to run for Krusee's seat, with financial backing from Annie's List, a statewide political network that recruits Demo­crat­ic women to run for office. Krusee also has a Libertarian opponent, Lillian Simmons.

That's not the end of the divisiveness in the GOP. Several moderate incumbents face costly and contentious primary challenges from dogmatic conservatives whom Democrats see as disconnected from their districts on important matters like health insurance. Similarly, some dogma conservatives such as Nathan Macias, R-Bulverde, seen as proxies for moneyman Dr. James Leinin­ger, now may face primary challenges from less radical candidates. "I'd rather replace a Republic­an with a Democrat," said Moon, "but if that's their strategy, more power to 'em."

The Senate would need a five-district swing to go Democrat, and with nine Republicans up for re-election, it's not impossible – just very unlikely under current districting. A recent poll for the nationally Dem-sponsored Lone Star Project showed Fort Worth's Kim Brimer with only an 18.3% approval rating, and his greater weakness could be his anonymity: 49.7% of likely voters polled in his district didn't know who he was. Perhaps better known to that district's voters is four-term Fort Worth City Council Member Wendy Davis, who recently resigned from her post to run as Brimer's Democratic opponent in 2008.

A larger word of caution is that the 2006 national elections demonstrated that a slight majority amounts to no majority at all. Even with a nominal, 31-seat advantage in the U.S. House of Representatives, the Dems have failed to achieve any major policy coups, and the "Demo­crat­ic" U.S. Senate is really a 49-49 tie with two independents. That suggests that with the notorious "Craddick Ds" still in the Texas House, a numbers victory, at least in the short term, could well be pyrrhic.