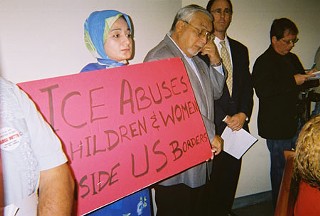 Protesters appeared before Williamson Co. commissioners Tuesday, demanding closure of a problem-plagued detention center for immigrant families. "How will we all sleep?" asked Dr. Asma Salam, pictured at left, referring to the controversial imprisonment of noncriminal immigrant families. Commissioners listened to speakers then voted to continue the county's contract with the center, amending the agreement to beef up their legal protections against future lawsuits or criminal violations. (Photo by Patricia J. Ruland)

The dirty little secret is out: The T. Don Hutto Family Residential Center, a detention facility for immigrant families in Taylor, has employed undocumented workers, as well as contractors with criminal records. The revelation has put Williamson Coun­ty, which administers the center for owner-operator Correc­tions Corporation of America, in an embarrassing legal bind. The infractions, ironic as they are, were cited in an official reprimand of CCA by the U.S. Immigration and Cus­toms Enforcement and addressed to County Judge Dan Gattis on May 23. The reprimand only came to light in October, when WilCo commissioners began airing concerns about mounting liability. But it was an alleged sexual assault of a detainee by a guard on May 19 that was the most likely source of the county's jitters over liability. WilCo and CCA were to "ensure that such an incident not occur again," the reprimand stated.

Commissioners initially voted to notify ICE and CCA of the county's intention to terminate its contract, but they reversed course at their Oct. 9 meeting after CCA put on a pageant to save the lucrative deal. CCA employees pleaded for their jobs, and a teacher described her pride at teaching "Third World children who ... don't know how to use a toilet."

It was the liability issue that most consumed commissioners. CCA lawyer Jay Brown insisted that 2006 court decisions had strengthened commissioners' "governmental immunity" against such claims. The court took the bait, resolving to discuss the matter in executive session. However, the American Civil Liberties Union, which has won 10 lawsuits filed on behalf of 26 immigrant detainees, is currently analyzing the county's liability.

According to a far-reaching report – "Locking Up Family Val­ues: The Detention of Immigrant Families" – published by the Women's Commission for Refugee Women & Children and the Lutheran Immigration and Refugee Service, Hutto staff and providers may have crossed the line numerous times. In an interview, the report's author, Michelle Brané, said the report addresses only the more serious documented incidents. In the medical wing, for example, pregnant detainees were X-rayed with no lead screen; detainees received dental work without anesthesia; pregnant women were not allowed milk and were shackled when taken outside the facility for checkups. Additionally, the report reveals that overheated water scalded children at times. To punish children deemed unruly, guards "would turn up the air conditioning so that the room became very cold" and would turn off hot water for bathing, the report states. But the worst offense was that so-called errant parents and their children lived under the threat of being separated.

Concerning the alleged sexual assault of a detainee, the question remains: Why was the guard not arrested or prosecuted? No one at the Oct. 9 commissioners' meeting seemed to know or care. CCA Senior Vice President Damon Hininger said the county was investigating the case, but Sheriff James Wilson said he didn't know the whereabouts of the case file and that District Attorney John Bradley had decided to forgo prosecution. FBI spokesman Erik Vasys said a subsequent federal inquiry was scrapped, too, but concurred that guard-on-detainee sexual contact is a felony in Texas and generally regarded as official oppression. Neither the sheriff's office nor the FBI has jurisdiction in the case, officials from both agencies said. Carl Rusnok, spokesman for ICE's Office of Professional Responsibility, said that the county's investigation "clearly established it was not sexual assault, after evidence and statements from the CCA employee and detainee indicated and established that the encounter was consensual." ICE believes the county should have the case file, since it served as the primary investigative agency. ICE also referred the case to the FBI for any potential federal charges. Ultimate­ly, on June 12, the U.S. Attorney's Office in Austin declined to prosecute the case. Two days later, ICE's Office of Professional Responsibility closed its case.

In any event, the alleged incident created a major stir. The detention facility was cordoned off, and a police officer noted in a report that an injury had occurred and a rape test was performed at a local hospital. But with no arrest, specific tapes or test results might never be disclosed. Detainees reacted in fear, Austin immigration lawyer Barbara Hines said. "Some of my clients were worried after the incident because they had adolescent daughters," Hines added. Generally, said Brané, author of the Hutto report, a climate of fear existed at Hutto, with alliances between detainees and guards forged for "protection." "I interpreted 'alliances' to mean 'favors,'" Brané said. That, coupled with the threat of separation from family members, could have contributed to a milieu of extortion, even retribution. ICE, too, grew concerned about detainee safety, noting in its reprimand, "Sub-contractors were found to have criminal histories that were not conducive to the family residential environment of the facility and those workers were denied access."

If law enforcement passed the buck on the alleged assault, ICE is currently assuming no blame for the 10 undocumented workers the agency arrested and deported. Nor is CCA at fault, according to Rusnok. "It is the responsibility of the provider of services [not CCA] including subcontractors to ensure the workers they provide have legal status," he said. Could it be that there's only one culprit left in the equation – the county?

As the Hutto story continues to unfold, immigration activists again this week called on officials to close the controversial detention center. A crowd of activists arrived at the Williamson County Courthouse Tuesday after a vigil and two-day walk from the facility in Taylor.