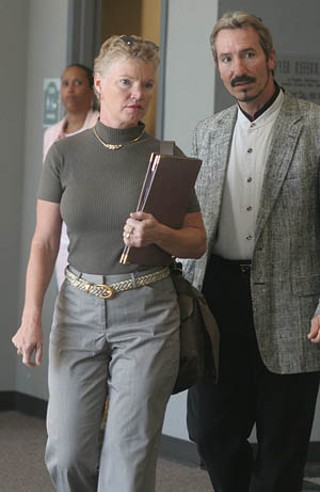 Carol and Lauren Hall, parents of Laura Hall, outside the courtroom Monday (Photo by Jana Birchum)

State District Judge Wilford Flowers declined on Oct. 26 to approve a bid for a new trial made by Laura Hall, convicted last month of tampering with evidence in connection with the grisly 2005 murder of 21-year-old Jennifer Cave, who was murdered and partially dismembered inside the West Campus apartment of her friend Colton Pitonyak. Pitonyak was sentenced to 55 years in prison for the murder; Hall was convicted of tampering with evidence in the case and of helping Pitonyak flee to Mexico to avoid apprehension.

Hall appeared in court Friday afternoon wearing jailhouse black-and-whites, her ankles in shackles. Her appeal attorney, Ken Mahaffey, argued that prosecutors failed to disclose crucial and possibly exculpatory evidence to Hall's trial attorneys that could have swayed jurors to be more lenient in her sentence or perhaps acquit her altogether. (Hall was handed a relatively modest term inside: five years for felony tampering and a year on the misdemeanor charge of helping Pitonyak escape, to run concurrently.) Among the evidence in question, Mahaffey said, is the identification of Hall made by local cabbie Doug Conley during the punishment phase of the trial. Conley told prosecutors that a fare he thought was Hall had made derogatory statements about Cave in his cab after he'd picked her up, but prosecutors failed to disclose the fact that Conley had been unable to identify Hall in a photo lineup. (Conley has set up a Free Laura Hall website, where sympathetic parties can learn how to contribute funds to her parents, Loren and Carol, who are trying to raise $15,500 to get their daughter out of jail on an appeal bond – possible under Texas law when a defendant receives a sentence of 15 years or less.)

Also in question is the testimony of Pitonyak's friend and neighbor, Nora Sullivan. Sullivan was called as a witness in both trials, ostensibly as a scene-setting sort of witness: On the night of Cave's murder, Pitonyak went to her apartment with a crazy story about getting into a gunfight with "some Mexicans." But her status as a "background witness" changed dramatically, Mahaffey argued, at Hall's trial when prosecutors began asking questions about statements Hall allegedly made to Sullivan on several occasions after the murder. These statements had not come up before, and supposedly Sullivan never mentioned them to prosecutors until about a week before Hall's trial. Yet prosecutors failed to disclose these newly discovered "facts" to the defense, which denied them the ability to investigate and prepare for cross-examination prior to her testimony. The Sullivan incident caused a dustup at Hall's trial – Judge Flowers was not at all amused by the idea that assistant DAs Bill Bishop and Stephanie McFarland might have withheld evidence they are bound by law to make available – and Sullivan was yanked from the witness stand, in order to give defense attorney Joe James Sawyer time to interview her and prepare for her testimony. Failure to disclose the Sullivan evidence before trial, Mahaffey argued, was "basically trial by ambush." 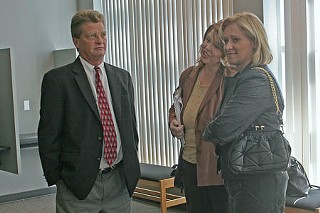 In all, Bishop responded that even if there were errors in prosecution, none rose to the level of actually harming Hall's defense or tainting her conviction. And in the case of Sullivan, Flowers reminded Mahaffey that he'd given Sawyer 24 hours to check her story out. And, he noted, at no time did Hall's defense "request" any additional time or additional "assistance" from the court. As such, he said, he found "no harm at that time, and I fail to find it at this time." The motion for a new trial, he said, "is denied."

Cave's family was relieved by the decision: "We're very happy," said Cave's mother, Shar­on. "We felt like the first trial was enough, and we didn't need another one." Meanwhile, Hall's parents said they'll continue the fight on appeal, which Mahaffey will now file with the 3rd Court of Appeals. 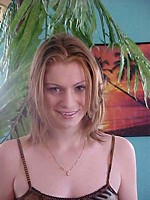