Tweet
print
write a letter
"Redistricting is, frankly, a series of trade-offs," J. Gerry Hebert told the committee convened to study single-member districts last week. He should know. Over his 21 years in the Justice Department, Hebert studied election maps, prosecuting cities and counties that engaged in racial gerrymandering; during the Texas Legislature's 2003 re-redistricting fracas, he represented the Dems wary of being drawn out of existence. He now appeared in front of the Charter Revision Committee with three "demonstration" maps showing what single-member districts could resemble for future City Council elections.

Most vexing is the question of African-American representation. While a growing Hispanic population ensures their council representation, Austin's dwindling black population makes it difficult to draw a majority-black district. So while Hispanics may gain more seats than they currently hold under the "gentlemen's agreement" reserving Place 2 and Place 6 for Hispan­ic and black candidates, the same may not be true for blacks, stoking worries that decreased African-American representation violates the Voting Rights Act. Hebert acknowledged the argument but said the cases he's prosecuted display "extreme racial polarization," where viable, qualified minority candidates lose due to running in Anglo areas. With several black candidates elected at-large in the county, that's a pattern Hebert doesn't see here; also, there's no reason to think the "gentlemen's agreement" couldn't be modified to include districts. In its color-blindness at the ballot-box, "Austin is different from a lot of other cities," said Hebert.

Aside from changing the ethnic makeup of the dais, single-member districts will likely increase the number of council members. Compared with America's largest 25 cities, at six seats (plus the mayor), Austin has the least council members – a far cry from New York City's 51 but also less than peer cities like Seattle (nine), San Francisco (11), and Boston (13). In any of these plans, the district representatives would serve along with a mayor and perhaps other council members elected at-large. And there's the possibility of "superdistricts" as well – combining individual districts to form larger city districts, where candidates could conceivably run at-large. 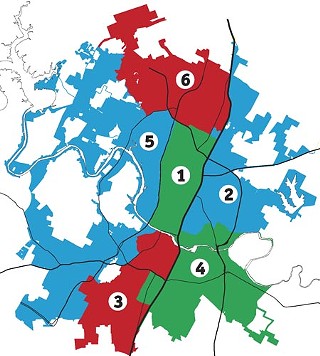 Six districts: Here, District 2 is what Hebert calls the African-American "opportunity district." Composing 31.7% of the voting age population, black residents edge out whites, but the Hispanic VAP, at 35.6%, beats both. However, with a much smaller percentage of Hispanic residents registered, black voters have the edge. "If everybody votes according to their 'group,'" said Hebert, a black candidate would win. Committee member Betty Baker voiced dissatisfaction with the vastness of District 5, while Chad Williams noted that similar complaints were made about Travis Co. Precinct 3. 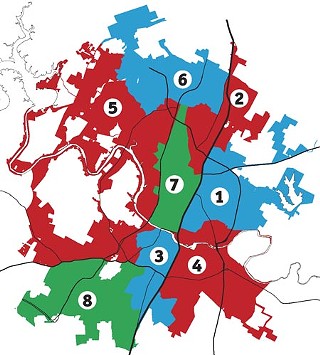 Eight districts: While chances were more "iffy" for the black voting bloc under six districts, here Hebert said there's a "great likelihood" black voters could elect their candidate of choice. While Hispanics still outnumber blacks in District 2, it's by far less (37.5% to 35%); again, lower Hispanic registration gives black voters the advantage. Conversely, District 4 would elect Hispanic voters' candidate with "almost certainty." Also, with districts 1, 2, 3, and 4 all majority-minority, they could be combined into a superdistrict for minority candidates. However, in going from one "safe" black seat out of six to one out of eight, the model raises fears about the diminution of African-American representation on council. 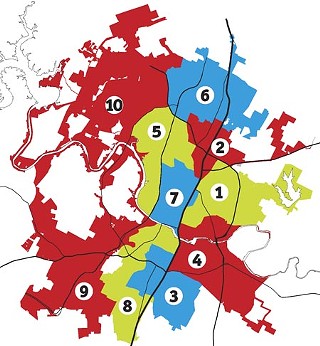 Ten districts: Under Hebert's 10-district scenario, District 1 is definitively African-American, with a true plurality of black residents (40.6% VAP). Districts 3 and 4 would see Hispanic voters' candidates win, while District 2 is also majority-minority. With 10 seats, council members would only represent 65,000 citizens in each district. But along with the black-vote diminution worries, the plan admittedly "divides neighborhoods a little more than you'd like," says Hebert.