How redevelopment can save the springs ... or not 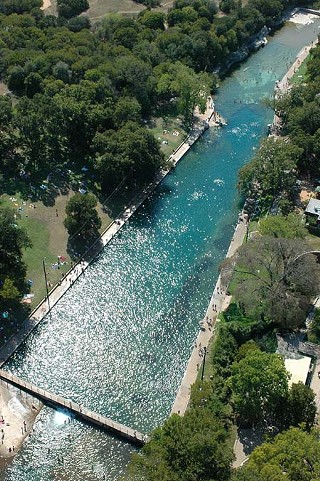 Austin, we still have a problem – the continued commercial pollution of our Barton Springs Watershed creeks as well as the Edwards Aquifer, a source of regional drinking water and Austin's beloved swimming pool. Heading toward a Nov. 8 City Council vote is a proposed solution championed by Council Mem­ber Lee Leffingwell – a newly designed ordinance that would amend the 1992 Save Our Springs Ordinance. It would apply to nearly 700 acres (200 tracts) of developed land, unless it gets curtailed to an even smaller pilot project.

Would these changes certainly result in a net reduction of aquifer pollution? And have the devilish details of the new ordinance been fully worked out to ensure the best possible environmental gain? Those worries – as with all things SOS – have triggered heated community debate. The good news: The city's Environmental Board and Planning Commission listened to citizen suggestions for strengthening the draft ordinance and incorporated many of those suggestions for final council deliberation. That's a city process working as it should.

While the legendary 1992 ordinance enacted important protections for Edwards Aquifer water quality – structural filters and site controls, impervious cover limits – it was applicable only to new development, not to properties already built out with shopping malls, offices, homes, and vast parking lots. A much-discussed example: the older, grandfathered shopping centers at the "Y" at Oak Hill, which continue to pollute week by week, year by year. Especially during hard rains, such pre-1992 developments disproportionately spill sediments and noxious contaminants (pesticides, lead, phosphorus, nitrogen, hydrocarbons) into creeks and eventually the aquifer.

This year, Barton Springs Pool has been closed a record number of days because a very rainy year caused flooding and washed unsafe levels of contaminants from upstream development into the springs and pool. While such pollution can be curtailed to a degree by on-site water-quality controls – such as special SOS Alliance ponds designed to filter out contaminants – the old developments have no such water-protection features. And the systems are so expensive (e.g., $1 million per site) that neither landowners nor the city say they can afford to install them.

Unless. Unless owners could make enough new money by redeveloping their land to pay for retrofitting it with new water-protection systems. For example, an ailing old Oak Hill "Y" sprawl-mall could be redeveloped as a nifty New Urbanist Town Center, with state-of-the-art water-quality improvements. That would please the Oak Hill Association of Neighborhoods, which wants better neighborhood services and stores. Indeed OHAN, which represents more than 20 member neighborhoods, has endorsed the proposed redevelopment ordinance. Theor­et­ic­ally, redevelopment also would prevent residents' driving the family gas-guzzler to better shopping elsewhere – another enviro plus. Leffingwell points to the current likelihood that Oak Hill residents will soon drive farther out to shop at the new Home Depot and HEB Supercenter now under construction in Drip­ping Springs (where the SOS Ordinance does not apply).

A major environmental motivation for the new amendment's proponents is to encourage the building of any new retail centers and apartment complexes on already-developed sites, rather than on "greenfield" raw land. (Greenfield development rules would not be affected by the new ordinance. All the protections of the SOS Ordinance in place would still apply.) The hope is that easing the rules on relatively close-in redevelopment will counter sprawl into the Hill Country. But whether market forces would actually work that way is open to much debate; as the SOS Alliance points out, a groovier New Urban Oak Hill Town Center could well attract new development all along both 290 and 71. They point to the reality that increased density of any kind means new sources of pollution. "Do your density somewhere else, not over the watershed," urges SOS' Colin Clark.

To tackle these problems and opportunities (and mitigate some of the noxious sentiments that settled in the environmental community after Proposition 2 failed last year), Leffingwell convened an advisory group 15 months ago. The open-invitation group met nearly weekly but informally; regular participants represented a cross-section of environmental, community, developer/business, and city environmental staff perspectives. Many of those involved in the process cited it as a model of pragmatic environmental action. SOS has criticized the lack of an official task force and publicly noticed process; Leffingwell responded from City Hall, "It was a lot more of a public process than a lot of things that go on around here."

Out of the advisory group's laudably collaborative work emerged the proposed new ordinance. In essence, the new Barton Spring Zone Redevelopment Ordinance proposes a give-get retooling. As with the new density-bonus system being proposed for Downtown ("Finding the Sweet Spot," Oct. 26), the new rules must be attractive enough to get owner-developers to voluntarily choose to use it. That market reality requires a balancing of interests – public and private, environmental and economic. If the new redevelopment terms don't work for developers, if owners lose too much land value, then neither redevelopment nor improved water-quality controls will result. Current pollution will continue unabated. For this reason Leffingwell, city staff, and the advisory group consulted extensively with landowners and developers to get their perspective and input. But as Leffingwell framed it, "This is an opportunity for redevelopment, not an incentive."

If a redevelopment project, under the proposed rules, did not trigger a council review and vote (See "Strengthening the Ordinance," below), it would be administratively approved. This is a key reassurance to developers, for whom delay and uncertainty mean increased costs; it's an equally key fear of environmentalists, who want public review of every project. Leffingwell noted by e-mail, "Triggers laid out in the ordinance address both density (which is not addressed in the current SOS Ordinance) and compliance with neighborhood plans. If these triggers are exceeded, they would be treated as if they were zoning changes, and council approval by majority vote would be required. This requirement would be in effect even in the ETJ [land outside city limits], where zoning is not currently applicable."

Developers also would pay to conserve open space. Smaller sites that could accommodate only sedimentation/filtration ponds (rather than the much larger, more effective SOS ponds) would be required to buy, give, or fund mitigation land, which would be preserved as open space. The ordinance would establish a new fund, for acquiring property within a watershed that contributes to the recharge of Barton Springs. Projections indicate the fund could gain about $1 million a year from developers; fees would be assessed at a proposed (but debated) $15,000 per eligible acre. 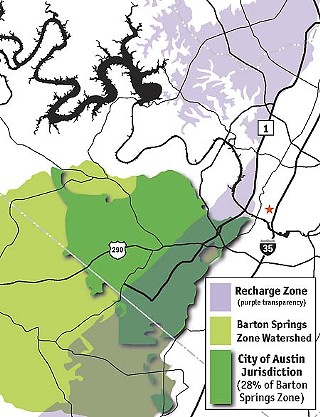 In the zone: The city of Austin can regulate development (and water quality controls) only within its jurisdiction. But rainfall throughout the environmentally sensitive watershed (Barton Springs Zone) fills creeks that cross the recharge zone; there it runs into the aquifer and evenatually emerges – polluted or not – at Barton Springs.

Some folks, like the Oak Hill Association of Neighborhoods and developer Mitchell, think the new redevelopment ordinance is swell as written. Noted Dwain Rogers, OHAN president, "We have seen numerous properties in Oak Hill, originally developed 15 to 20 years ago, become 'frozen in time' by the impact of existing water-quality regulations. ... This results in properties that both continue to pollute the aquifer and do not evolve over time to meet the needs of Oak Hill."

But environmental groups (including the Sierra Club and Save Barton Creek Association) and the Austin Neighborhoods Council expressed reservations and urged further refinements after the draft ordinance was released in September. Most praised Leffingwell's leadership and said the concept had merit but called for significant refinements and greater community consensus on the new ordinance before it goes to a council vote and becomes law. Their advocacy led to the amendments recently incorporated by the city's Environmental Board and the Planning Commission. (See "Strengthening the Ordinance," below.)

As is its hard-line wont, the SOS Alliance led the opposition against the ordinance as written; it would strongly prefer no new (re)development or construction whatsoever over the watershed. Before enacting any new ordinance, said SOS, the city should first perform a "holistic analysis" of all potential Barton Springs Zone watershed pollution that could result from the redevelopment of about 200 eligible sites – including construction, vehicle, road, sewage, and other impacts. In response to the concern about construction-phase pollution, Leffingwell sponsored a proposal that passed at council Oct. 25. It directed the city manager to "evaluate and update the City's practices, capabilities, and available resources for review and inspection of construction phase erosion and sedimentation controls, inspection of water quality ponds, and enforcement of maintenance requirements."

The common hope is to craft a consensual, pro-environmental policy that's both sensitive and workable. Even the SOS Alliance was in a rare city-laudatory mood late last week, releasing a statement that praised the Planning Commission for incorporating (SOS' own) "great recommendation" to start with a pilot project, to prevent "an onslaught of high density development and grandfathered applications."

At this writing, the ordinance is scheduled for a Nov. 8 council presentation and vote. But in an Oct. 16 letter to the mayor, council, and commission members, the ANC had said: "The Austin Neighborhoods Council requests additional consideration of the concerns expressed by the Environmental Board, our community and its environmental advocates. ... The hope is this would provide the Planning Commission and Council a better, more fully resolved ordinance with fewer objections and unanswered issues."

Thus far, that's what appears to be happening.

Open natural land is "pervious" – it permits rainfall to closely pervade/penetrate the soil and underlying rock material like limestone, which together with vegetation filters out many pollutants before the rainwater reaches the aquifer. The buildings, roads, and parking lots on developed land are "impervious" cover. During heavy rains, contaminants and sediments speedily run off impervious cover and end up in creeks, the aquifer, and Barton Springs.

Eligible properties: up to 200

Eligible acreage: up to 700 acres

Size of properties: 86% are under 5 acres 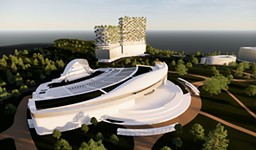