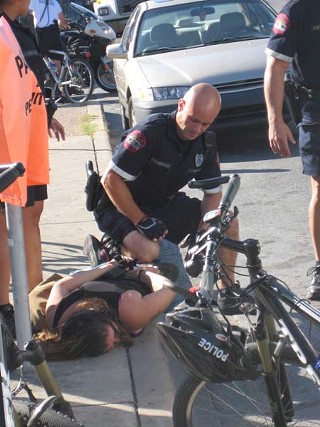 Alyson Matuke lies face down on the pavement, surrounded by police officers who, according to attorney and witness Skip Davis, used excessive force to subdue the woman after she reportedly saluted them with her middle finger. (Photo by Skip Davis)

Austin criminal defense attorney Skip Davis was headed out of municipal court around 4pm on Oct. 18 when he happened upon a scene that stopped him dead in his tracks: a gaggle of Austin police officers (including at least three Davis identified by name), he says, "beating down" two homeless people near East Seventh and Sabine, right outside APD headquarters.

Sources tell us the incident began when two men got into a scuffle nearby; as one man, Devron Hub­bard, walked away, police yelled at him to stop. Hubbard either didn't hear the command or didn't stop quickly enough, and in response police moved in on him, tackling him. As police struggled with the man, his girlfriend, Alyson Matuke, approached, imploring the officers to leave him alone. That didn't work: "They tell me, 'You need to leave the scene,'" Matuke told KXAN. "So I'm like, 'All right, fine, I'm gonna leave,' and I go to step across the street."

She took a step or two off the curb, then changed her mind, stepped back onto the curb, and "flipped 'em the bird," she said. Apparently that didn't go over well with the officers, who Davis said pounced on Matuke, tackling her, face down, onto the pavement. Davis, who photographed part of the incident with his mobile phone, said he was appalled by the excessive use of force against Matuke and Hubbard. "It was atrocious," he told reporters. "I am absolutely exasperated with what I saw there and beside myself with incredulity."

Davis said he instantly called 911, seeking to make a report and provide a witness statement. Amazingly, he said, the officers dispatched to the call were "the same guys that beat the two." When Davis told the officers he wanted to make a statement, he said he was told that wouldn't happen: "They said, 'no one's taking your statement,'" he said. When Davis asked for a reason, he said the APD lieutenant present as the scene unfolded told him, "because I'm in charge, and that's not going to happen."

APD spokeswoman Anna Sabana said Oct. 19 that the department was investigating the incident. According to a police report, Matuke, Hubbard, and another man, Jerry Still, were arrested in connection with the incident on charges that include pedestrian in a roadway, resisting arrest, evading arrest on foot, and possession of drug paraphernalia. Davis said he plans to file a formal complaint with the Office of the Police Monitor and with APD Internal Affairs.