Will Austin get a streetcar at last? 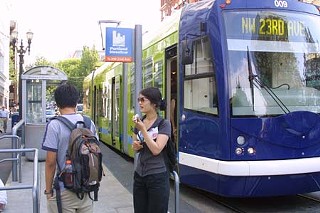 Not a Vintage Trolley: A modern rapid streetcar for Austin would provide short-hop transportation around town and link to regional commuters – while costing less than light rail. (Photo by Maggie Gardner)

On Monday, Mayor Will Wynn shared with the Chronicle his plans to call for a major November 2008 voter referendum for a new local rail transit system – a call-to-action to be issued Thursday at his keynote State of Downtown Address at the Downtown Austin Alliance annual luncheon. As Wynn and fellow proponent Brewster McCracken envision the modern ultra-light-rail streetcar system, its route would take riders Downtown, to multiple Central Austin locations (such as Mueller and Zilker Park), serve the UT and state office buildings, and connect major work-live-play nodes. It would connect to the Capital Metro Red Line commuter rail opening next year, which runs north to Leander and could include new spurs running east to serve commuters in Manor and Elgin. A crucial link to Bergstrom Airport could yield an innovative funding source – airport-backed bonds – for building the new circulator/commuter rail transit system.

At the annual DAA luncheon two years ago – an event that draws more than 500 influential Austinites – Wynn called for 25,000 people to be living Downtown within 10 years, kicking off the high-rise condo boom. Wynn intends this announcement to have an equally transformative effect. "I'm hellbent on having an election in one year," he said, expressing optimism about the chances of the rail referendum's success.

Wynn, who initiated the Austin Climate Protection Plan and regularly gives community and national talks on fighting global warming, said he feels a strong sense of mission to see the region adopt rail transit as a meaningful, workable alternative to vehicle travel. In addition to the economic, quality-of-life, clean air and other reasons to reduce traffic congestion and auto/oil dependency, said Wynn, the need to reduce greenhouse-gas emissions from cars is a key motivation. According to Growing Cooler: The Evidence on Urban Develop­ment and Climate Change, transportation accounts for one-third of CO2 emissions in the United States – the globe's largest emitter of greenhouse gases that cause global warming. "Most thinking people realize we'd be out of our minds not to have commuter passenger rail," said Wynn, noting that Austin's peer cities are far ahead on creating successful systems of efficient, cost-effective transit surrounded by compact transit-oriented development.

Wynn emphasized that a positive rail transit referendum would balance the $2.5 billion toll-road plan recently approved by the Capital Area Metropolitan Planning Organization. Now that "that miserable vote" is over, said Wynn, transit needs to be our top priority to create "a comprehensive mobility solution." Referencing the extensive lobbying effort by the Chamber of Commerce (Take On Traffic) and others to get five new Austin toll roads, Wynn said: "the toll misery has held this hostage. It's clouded the whole mobility discussion. But as painful as the toll package is, it's only a piece of the multimodal transportation system needed for our future, and that includes commuter rail – at a fraction of the cost of added toll lanes." Wynn cited political assurances made by key toll-road proponents such as Take On Traffic Chair Gary Farmer that they also would support mass transit. Fast on the heels of the Oct. 8 CAMPO vote, Wynn is calling in those promises: "Here's the chance for them to pay out."

McCracken said that he and other members of the City Council's Land Use and Transportation Committee have been working on related financing strategies since last August. A new rail system will require a blend of many private and public funding sources, potentially to include federal dollars. McCrack­en is excited by the potential to leverage the value of Austin's airport – an asset owned by the taxpayers – to issue general obligation bonds to pay for a transit system that serves the airport. National consultants have said the concept is worth seriously pursuing. The bonds would need voter approval; potentially, the initiative could be self-funding. The initiative is aligned with a new Trails and Transit Enterprise Fund expected to reach council by the end of the year; it would help fund a streetcar system with revenues from city-owned parking structures. McCracken noted the neat symbiotic justice of letting parking pay for transit.

Wynn outlined a schematic timeline of action milestones for the year ahead. First, the city of Austin would convene an interjurisdictional finance task force to achieve needed regional consensus. Wynn and McCracken will quickly bring forward a directive to the city manager to investigate airport-backed financing. By next spring, the stakeholder group would agree on a final route map, a specific type of vehicle, and other system elements. A specific proposal would gain approval by Capital Metro, which would formally call an election by August. Summer would be spent on educational community outreach and an active campaign to achieve success at the polls; Wynn would take a leadership role as he did in last year's bond election. Unquestionably, achieving the required buy-in and consensus from multiple regional players will test the mayor's political mettle. But Wynn intends to make a successful commuter rail referendum the legacy of his remaining 18-to-20 months in office: "I'm going to use what political capital I have to get this done."

For more, read the July 20 articles "Streetcar Desires," "10 Reasons to Love a Streetcar," and "Learning From Portland."