Roaming Celebration of Bikes and Beer Rolls Into Austin 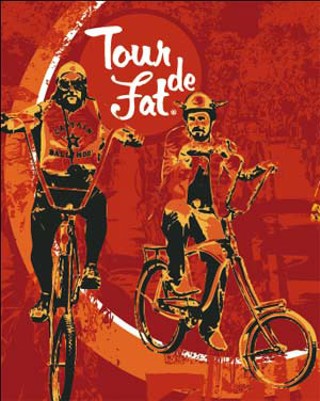 If ever there was a question as to the supremely righteous and awesome nature of bicycle culture, one event, the New Belgium Tour de Fat, rolling into Austin this Saturday, is on a mission to convert any nonbelievers. Now in its seventh year, the tour is a beer-fueled celebration of everything bike, benefiting local cycling nonprofits – in Aus­tin's case, the Yellow Bike Project, the Austin Cycling Associ­a­tion, and the Austin Ridge Riders. This year marks the first time the tour has ventured into Austin's city limits, stopping in the past at Smithville's mountain-bike mecca, Rocky Hill Ranch.

The celebration kicks off with a massive bike parade at 11am, which starts and stops at Fiesta Gardens in East Austin, where Tour de Fat takes place from noon to 6pm. Amid all-day music and follies, in addition to snacks and beers – including the tour's namesake Fat Tire, among others – one preselected attendee will take the ultimate leap of faith by bicycle and trade in his or her car (to be sold in a charity auction) for a new Black Sheep commuter bike and BOB trailer. Attendees can also make a covenant with New Belgium's Team Wonderbike, a nationwide movement in which pedal-pushers pledge to bike to work at least two days per month. So far, 597,930 miles have been pledged, equaling an estimated reduction of 7,175,160 pounds of CO2 annually. Carbon reductions from Austin pledges will be tallied in real time on a giant board. Organizers are confident Austin can beat Tempe, Ariz.'s 40,000 pounds.

"I feel like we've hit our stride with the festival, and I feel like more people are seeing the bike as an accessible tool for activism and personal change," said Matt Kowal, the tour's creative director. It's about "living more ecstatically while reducing your environmental footprint, getting more out of life while leaving less behind."

Channeling psychologist Carl Jung's theory that human play is a fermenter for innovation, Kowal believes the Tour de Fat is the perfect venue to get folks from all walks of life together and invigorated about bike transportation and sustainability. The tour itself is a testament to sustainability. In the last few years, it has become a glimmering green gem in the wasteful world of outdoor festivals, typically diverting 90% of its waste from landfills through careful composting and recycling efforts, showcasing an all-day lineup of performances on two off-the-grid solar-powered stages (supplanting the abhorrent diesel generators that typically power such events), and traversing the country using trucks that burn 100% biodiesel, often sourced from recycled grease. This year's Tour de fat in Fort Collins, Colo., New Belgium's hometown, hosted about 9,000 attendees, left behind 607 pounds of compost, 111 pounds of recycling, and only 26 pounds of trash, a 97% waste diversion rate, according to tour co-coordinator Chris Winn (aka the Rev. C. Ballyhoo).

Neal Turley, whose Austin-based firm, Sustainable Waves, has been supplying solar-powered stages to the tour for three years, jokes that New Belgium can pull off a nearly zero-waste, zero-energy event and do it better than anyone else, while offering a strong message of awareness, all without sounding educational or preachy – even though they do have a gospel band on tour with them. "At the end of the day, it gets people on bikes," Turley said.

Attendees are encouraged to arrive by bicycle and in costume. Performers include the Reals, Asylum Street Spankers, MarchFourth Marching Band, and the Handsome Little Devils. For more info, see www.followyourfolly.com and www.newbelgium.com.