Photo courtesy of The Eldorado Success

The future isn't exactly looking too bright for our favorite polygamist prophet, Warren Jeffs, imprisoned leader of the Mormon breakaway sect the Fundamental Church of Jesus Christ of Latter-day Saints, who was convicted in a Utah court on Sept. 25 on a charge of accomplice-to-rape for his role in arranging and performing a wedding between a 14-year-old girl and her 19-year-old first cousin back in 2001. The Utah conviction carries the possibility of life behind bars (Jeffs will be sentenced Nov. 20), and Jeffs still faces similar criminal charges in Arizona (for incest and sexual misconduct), as well as a federal count of unlawful flight to avoid prosecution. Still, the prophet's legal turmoil hasn't stalled the work of the FLDS faithful inside the sect's gated compound in the West Texas town of Eldorado. In fact, says Randy Mankin, publisher of the weekly Eldorado Success (who, with his wife, the paper's editor, broke the story of the FLDS land purchase in Texas), "if anything," construction inside the private Yearning for Zion ranch has actually "accelerated." YFZ residents "are building buildings as fast as they can get them up."

To recap: Jeffs, 51, was nabbed by a Nevada trooper outside Sin City last summer, bringing his life on the lam to an end, which lasted well over a year as he dodged state and federal charges related to his arranging marriages between young girls and older, often already married men. And last month, after a year of pretrial wrangling, now-21-year-old Elissa Wall took the stand at Jeffs' Utah trial to detail the horrors of being an FLDS child bride. Wall (who, until deciding to go public two weeks ago, was known only as "Jane Doe") was 14 when Jeffs presided over her marriage to her 19-year-old first cousin, Allen Steed, inside a Nevada motel room. Wall sobbed at the wedding, where others cajoled her into saying, "I do," she told jurors. A month in to the marriage, she said, Steed told her it was "time for you to be a wife and do your duty." She knew nothing about sex and had no clue it played any role in reproduction, she said, and she was "so scared." Steed laid her on the bed and had sex with her; afterward, she said she fled to the bathroom, downed some over-the-counter pain relievers, and curled up on the floor. Called to testify in Jeffs' defense, Steed told the court he had no memory of his bride crying at the wedding and that she actually initiated their first sexual encounter. In sum, according to press reports, Steed told the court he believed the marriage was right under "God's law" and that he doesn't believe Jeffs "has ever done anything wrong." Ultimately, the jury didn't buy that version of events, and on Sept. 26, Utah police filed rape charges against Steed, who testified knowing his words might be used against him.

Polygamy – or "celestial marriage" – is key to the FLDS, which believes that men need at least three wives to be exalted to heaven and that only women who display beatific obedience to their men will be allowed to tag along for the final ride. For a century or so, most FLDS members have lived and practiced their faith in a community called Short Creek, made up of the twin towns of Hildale, Utah, and Colorado City, Ariz., an extremely remote landscape bordering the Grand Canyon. Aside from a high-profile raid of the community back in the Fifties, which turned into a public-relations disaster for public officials after photos of sobbing children torn from their mothers made national news, the remote location served the community lifestyle fairly well. And it seems likely that if Jeffs and his gang had simply gone on about their polygamist business among consenting adult members (although technically still illegal) instead of bringing minor girls into the mix, the group might not have attracted as much attention as it has in recent years, culminating with the prophet's current criminal woes. Indeed, migration to the closed compound in Eldorado (and to at least two other smaller compounds in Colorado and South Dakota) was in part a reaction to increasing heat in Short Creek, where, despite the remote location, outsiders (read: law enforcement) are better able to poke and pry into the sect's private affairs. (For more on the FLDS, see "Meet the New Neighbors," July 29, 2005.)

Perhaps the FLDS has learned its lesson. Courtroom drama notwithstanding – or maybe because of it – work at the FLDS' Eldorado compound continues uninterrupted, says Mankin: It is increasingly apparent that Eldorado is "ground zero, the world headquarters of [Jeffs'] theological kingdom," he says. There is little doubt as to the importance of the compound – the FLDS has built its first-ever temple there. The private "town" now includes a public water system large enough to support roughly 3,000 people, and Mankin says FLDS members are in the process of completing "Phase I" of a sewer system capable of supporting at least that many people and slated for expansion in two additional phases. The sect has kept up with its taxes (paid in cash – a relief for local officials), and members continue to keep to themselves: Aerial photos of the community depict women dressed in traditional pioneer-style garb working in vast green fields and always-long-sleeve-clad men engaged in various construction projects dotting the 1,691-acre spread. In short, sect members have been very, very busy: "They're industrious," notes Mankin, "but so are fire ants." 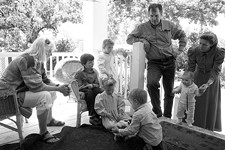 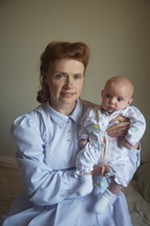