City has Alpo on its face

Tweet
print
write a letter
On Monday, the fifth citizen-group lawsuit this year related to development was filed against the city of Austin, this time alleging a "conspiratorial strategy" to keep the controversial animal shelter relocation decision away from the public scrutiny of an open council vote. Intriguingly, the lawsuit promises to lift the veil on who really wears the pants (or is that skirt?) at City Hall – the city manager, and the staff she directs, or our elected officials on City Council.

The lawsuit alleges "the Austin City Council has violated the Texas Open Meetings Act by failing to give public notice of its deliberations" on 1) deciding to move the municipal animal shelter and 2) amending the East Austin neighborhood plan that includes the proposed new site. Lead plaintiffs are the city-appointed Govalle/Johnston Terrace Neighborhood Planning Team, which created the city-approved plan, and People Organized in Defense of Her Earth and Her Resources, a social-justice activist group with overlapping leaders and members. Both groups have called for the city to follow their plan and build affordable housing and/or parks on the site. In a deft bit of east-west solidarity, they're joined as plaintiffs by the Old West Austin Neighborhood Association (which has an interest in the shelter's current Town Lake site) and FixAustin.org, an animal-welfare nonprofit asserting that the Eastside site would lower pet adoptions.

The 31 pages of legal petition and exhibits trace a most circuitous – possibly illegal, even criminal – city decision-making process. Delic­i­ously, says plaintiff's attorney Bill Ale­shire, City Manager Toby Futrell, and Town Lake Animal Center Director Dorinda Pulliam stand to be the star witnesses for his clients against City Council as discovery proceeds. "It's their own actions and own words that are our strongest basis for the suit," Aleshire said. In a March 27 memo on which the mayor and council were cc'd, Futrell justified staff action to proceed with the new site by claiming council had provided a policy directive to relocate the shelter, when it voted March 8 to approve additional project funds and proceed to hire an architect. Yet no explicit statement of a relocation discussion, decision, or vote was ever part of the public council record.

If Futrell's account is correct, alleges the lawsuit, then council violated the Texas Open Meetings Act. Such a decision, particularly as it amends the adopted Govalle/Johnston Terrace Neighborhood Plan, requires consultation with the city-appointed neighborhood planning team, they claim, and public notices that were never given. "If council and staff are going to disrespect the neighborhood planning process, then they need to do it in the open," said Aleshire, a former Travis Co. judge. "It sure gives the appearance that this was done on purpose." Numerous neighborhood planning teams have complained that their plans, which are legally adopted by city ordinance, later have been disregarded by council and staff. This lawsuit could crack open that endemic problem, as well.

Futrell's assertion also leaves council open to the charge that members intentionally camouflaged a vote to relocate the shelter, said Aleshire, by hiding it under a funding-increase agenda item. Or, if Futrell is putting policy decisions in council's mouth, then Austinites have a whole other kind of problem – a city manager and staff scheming to push their own agenda past an inattentive, bamboozled, or just plain limp mayor and council. Third option: Staff and council members illegally conspired to work together to cut the public out of the relocation decision, as the lawsuit alleges. Whatever the lawsuit discovery process reveals, the city manager appears to have set up council to get a load of animal by-products on its face.

The March 8 council motion referenced by Futrell was made by Betty Dunkerley and seconded by Mike Martinez. When asked Monday if he understood that vote to be a council policy directive to staff on the shelter relocation, Martinez said: "Absolutely not. In no way was I ever informed it was, or was it even portrayed as, a decision to relocate the shelter." He added, "If that was the intention of staff, then they clearly misled us." Martinez said he shares the frustrations he's hearing from citizens: "The city manager at times directs policy, rather than managing and implementing the policy that council adopts." He said he intends to change that in hiring a new city manager.

Martinez is acting to put the staff's selected new site to a vote on the Oct. 11 council agenda. "I want to have that public vote once and for all," he said. But he noted, "I truly do not know if it will get passed by council."

What could have prevented this whole mess? Better urban-planning policy by the city of Austin. Stupefyingly, council has no policy requiring that city-owned sites be master-planned, a process that would ensure that city developments exemplify council's urban-planning priorities. Nor are new city facilities required to conform to council policy for good urban design and planning, such as the Design Standards developed by the Design Commission, a review by that city commis­sion, review and input from the city's Urban Design office, or an Austin Climate Protection Plan review. City Principal Planner George Adams said a review against the commercial Design Standards and Mixed Use Ordinance occurs before a building permit is issued; however, the relevant design-thinking needs to occur much earlier, at the master-planning and programming stages. The city does have a laudable requirement that new city facilities meet Silver Leadership in Energy and Environmental Design Green Building Rating System standards. Separately, both Brewster McCrack­en and Lee Leffingwell agreed the city would be wise to require similar compliance reviews for its other policy initiatives. Can the council members overcome their competing mayoral ambitions to co-sponsor a resolution?

For the animal shelter, the whole Eastside outcry and current council dithering over the site selection could have been pre-empted, had the city initiated site master-planning when it first acquired the significant 44-acre tract (much of it undeveloped) in 2003. While it has been tagged the Health and Human Services campus, city staff have recently proposed using it for an animal shelter, affordable housing, and new parks and recreation facilities, in addition to the existing Health & Human Services office buildings. That's a mixed-use campus – and the Planning Commission has called for all new city of Austin projects to be designed to mixed-use principles. The neighborhood justifiably objects to such a huge city development without a process of involving them and formally amending the neighborhood plan.

Lacking design intervention, the city's reflexive behavior is to hack off hunks of land for separate department needs. But council could instead direct staff – or the outside architect it's about to hire for the shelter – to first address the highest and best use for the whole integrated site on Lavender Loop, at Airport and 183. The city has an opportunity to create an intelligent, integrated urban design for the whole campus – and to show its respect for the Govalle/Johnston Terrace Neighborhood Planning Team and Eastside citizens by including them in site master-planning, starting from their city-adopted neighborhood plan.

For private developers seeking planned unit development zoning for large tracts, the city is raising its requirements for good urban design and careful, advance master-planning of the whole site. That makes it timely for the city of Austin to walk the talk itself – to model the behavior it lauds. 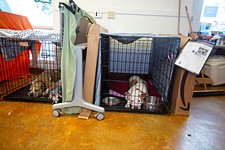