Final recommendations due by end of November, go to council in December. 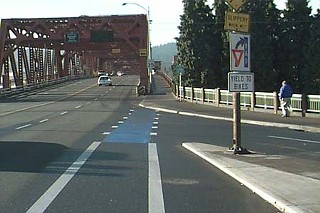 As the city’s Street Smarts Task Force hones its recommendations, geared toward “transforming Austin into a world-class bicycling city,” its members will consider a “toolbox” of bike infrastructure best practices from around the country – things like bicycle blue lanes, pictured above and implemented widely in bike-mecca Portland, Ore., used to promote awareness at auto-bike conflict areas, such as near highway on-ramps or where traffic merges. – D.M.
Photo from www.portlandline.com

Each time the question "Why don't more Austinites bicycle for transportation?" is asked, the resounding response from people is, "because I don't feel safe." The Street Smarts Task Force was devised precisely to address this concern, by creating and promoting "the best environment for the friendly coexistence of bicycle riders and other transportation users." The broad-based, 21-member volunteer task force – broken down into Infrastructure, Education and Promotion, and Law Enforcement subcommittees – has been meeting monthly since March. A couple of weeks ago, reps from Infrastructure and Law Enforcement made presentations at a City Hall meeting. The subcommittees are to finalize a set of recommendations by the end of November, which will be presented to the council in December and likely be included in the city's bike plan, currently undergoing its first big revision since 1998.

Lane Wimberley, a longtime bike commuter and transportation-cycling advocate, presented the recommendations of his Infra­struc­ture Subcommittee. Dissecting the task force's goal of making bicycling a viable form of transportation, Wimberley said part of that viability means biking should be "practicable and effective" and have a "reasonable expectation of safety," compared to other forms of transit. And the real goal should be to encourage more average folks to bicycle. In addition to feeling unsafe, the city has additional barriers to regular cycling: a lack of safe-route infrastructure amid Austin's "islands of connectivity," a lack of clear-way finding signs for existing bike routes, and concerns about one's appearance (especially in sweaty summer months) upon arrival at a destination. Listed below are some of the subcommittee's preliminary recommendations:

• Explore the idea of bike freeways, possibly expanding off-road trails – such as the existing Shoal Creek Trail – which proceed under many Downtown streets and can be major tourism draws.

• Consider institutionalizing Downtown bike rentals to give tourists an alternative to car rental.

• Undertake lane diets, in which roads with sufficient space and too many auto lanes – such as Steck Avenue, a key east-west connector in the northwest – can lose a car lane and make room for bike lanes or multiuse trails.

• Increase the budget and staff of the city's bike program and establish a council-appointed, volunteer Bike and Pedestrian Commission.

City Urban Transportation Commission chair (and 2006 City Council candidate) Andrew Bucknall spoke last Thursday on behalf of the Law Enforcement Subcommittee. Part of the task force's purview is to "address and examine causes of recent bicycle fatalities and injuries in Austin." The perception that motorists who injure or kill cyclists aren't punished remains held strongly in the bike community. Bucknall cited the local "dominance of the car culture" as an obstacle and said road-users "must have an acceptance of bicycles as a legitimate vehicle, as it is by state law," before enforcement issues will significantly change. He also said, however, that at times "the way things are presented by the bike community is counterproductive" and called for "emphasis on multimodal transportation collaborations." Here are a few of the subcommittee's recommendations:

• Establish a 3-foot passing law for motorists overtaking bicyclists, much like what the Texas Bicycle Coalition has lobbied for at the state Legislature. It was agreed that, given TBC's high confidence that such a measure will pass statewide next session, a city-only law would be counterproductive and hard to enforce.

• Prohibit mobile-phone usage and texting by operators of all moving vehicles.

• Prohibit parking within existing bike lanes and within 20 feet of intersections.

• Review the Austin Police Department's tolerance guidelines on traffic laws and compile data on hit-and-runs, as well as annual crashes and citations.

Find out more about the task force at its city website: www.ci.austin.tx.us/council/streetsmarts.htm.