Austin's Future Skyline?
This composite image from Austin Fit Magazine (reprinted with permission) shows what Downtown will look like if all the tall condo/mixed-use projects now planned get built.
New high-rises from left: Spring, the Monarch, 360, W Austin Hotel and Residences (Block 21), Altavida, Fifth & Congress, 21 C, the Shore, Legacy at Town Lake.
For project details, click on each tower at www.austinfitmagazine.com/skyline. Then order the poster, and hang it by a window. So much cheaper than a condo with an actual Downtown view!
Another fascinating site that shows our changing city: www.urbanaustin.org. Add your latest project info to this community-edited wiki map showing what's currently being planned and built.

Hey, City Hall: Take the cash! Back in June, Barton Place condo developer Con­struct­ive Ventures made a proposal to the city: The company would write a whopping $1 million check to the city of Austin Afford­able Hous­ing Trust Fund, and in turn the city would expedite the project review process (to start Oct. 19) and waive fees worth $300,000. Net gain: $700,000 for the city to help its low-income citizens.

But the city apparently can't be bothered to figure out how to accept the check. The contribution (suggested by the Zilker Neigh­bor­hood Association) was to underwrite affordable housing in the Zilker neighborhood, as civic-minded compensation for the project's displacement of a low-rent trailer park. The proposal is being closely watched as a model for voluntary "density bonus" contributions to fund community needs.

Yet according to CV partner Larry War­shaw, the city has failed to go proactively after the money. He presented a proposal to Paul Hil­gers, director of Neighborhood Housing and Community Development, and the city's chief of staff, Kristen Vassallo. Warshaw believes the ball was in their court to tweak the proposal to make it work and says he still wants to donate the money. Hilgers says he still wants it for affordable housing, such as the neighborhood's deteriorating Mary Lee Foun­da­tion residences for special-needs adults.

Yet the deal has stalled – what's the problem?

Vassallo says city legal says the city can't consider the proposal until after the zoning change requested by CV for Barton Place is finalized in January or February. At issue is the Baxter Bill (House Bill 2266, a 2005 farewell poison pill for Austin from former Dis­trict 48 Rep. Todd Baxter), which outlaws municipally required affordable-housing funding by developers. Yet the Constructive Ven­tures proposal does not tie the voluntary affordable-housing gift to its zoning change request, so Warshaw thinks this legal fear is a bogeyman. Meanwhile, he's got a project to build – Barton Place units are nearly all reserved and selling briskly.

Once again, will the iron hand of the city legal department and its fear-minded interpretations be allowed to thwart the community's larger best interests? Notes Warshaw, a onetime policy aide to former Mayor Kirk Wat­son: "We all know that with the city, where there is a will, there is a way. If the city has the will to make this work, we are onboard and enthusiastic. We would be thrilled to partner with the city to make this $1 million available for affordable housing."

Is no one at City Hall creative, empowered, or brave enough to figure out how to take a large check for the city's Afford­able Housing Trust Fund from an eager-to-contribute developer? If not, for shame – and City Council might as well surrender right now on crafting a density-bonus ordinance.

Too many bars or too few? Let 'em know: The Com­mun­ity Preferences Survey for the Downtown Austin Plan has garnered more than 3,000 responses to date. Chime in with your own loves and hates and help shape the future of Downtown before the 34-question survey (with optional write-in responses) closes Oct. 12. Results will be presented at a town hall meeting later this fall.

New neighborhood 'buds: Potential good news for neighborhoods should be the four new city staff positions approved in the 2007-2008 city budget: Neighborhood Ombuds­men. To quell high frustration among many neighborhood advocates and associations with city-planning issues (e.g., Northcross), the new positions were created to provide better information and citizen responses on planning, projects, and developments around town. Greater transparency with the citizenry: Swell idea!

But will the still-undefined "ombudsmen" provide real satisfaction to neighborhoods, or could the $300,000 budgeted be spent more beneficially in other ways (like hiring a city architect and a chief urban planner)? Some believe the ombudsman idea found ready favor with City Manager Toby Futrell because it was the easiest bone to throw. In any case, expect it to take months to fill the positions. With luck the job description will include helping city departments and staff to better communicate and collaborate on implementing neighborhood-plan goals. That alone would be a triumph of 'budsmanship.

In the works: Public Works Director Son­dra Creighton retires Nov. 1. Creighton, the city's first female director in the sewers-and-streets realm, has been cited for excellence in project management. Look for a permanent new director to be announced next spring, culminating a national search. In the interim, Joe Ramos has been named acting director.

The opportunity for council is to hire a new Public Works director with a background in urban planning and architectural design, rather than a straight engineer. As Austin sets the bar higher for its civic realm, projects like roadway improvements need to better mesh with urban-design policies like Great Streets. (Witness the current Cesar Chavez two-way conversion project.)

Along the same lines, Toni Thomasson, Austin chapter president of the American Insti­tute of Architects, has called upon the mayor and council to reinstate the chief architect position formerly based in Public Works. The city lacks a top-level design professional in either architecture or urban design to oversee the quality and planning of all city buildings and projects – a hick-town omission, which ill-serves the city's now multiplying urban design and density initiatives.

Boom to Best? Mayor Will Wynn can explain Austin's embarrassing lack of a chief city architect or urban designer to pre-eminent New Urbanist planners Andrés Duany and Hank Dittmar, when he moderates their upcoming forum, From Boom to Best? The Future of Central Texas. A warm-up for the national Congress of New Urbanism conference coming to Austin next April, the discussion will address how Austin can best grow intelligently and sustainably. (Envision Central Texas event: Friday, Oct. 19, 11:30am-1pm, Four Seasons Hotel, $45/600, register at www.envisioncentraltexas.org.)

While in Austin this spring, Duany told the Chronicle ("What Would Andrés Duany Do?" April 13), "You need an ongoing town architect position that inexpensively provides urban-design services to the citizens and the neighborhoods." And of our hot city's insecure groveling before out-of-town developers he scolded, "Austin should stop acting like a cheap date – and ask its suitors to dress properly and take her out to a good restaurant." Maybe Wynn will spring for a beer afterward at Maria's Taco Xpress. 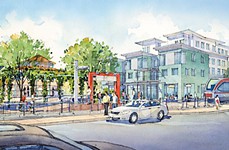 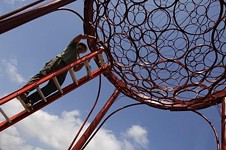