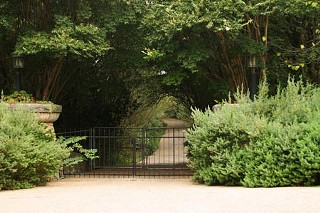 Tucked into the woods beyond this gate at 3200 Bowman Ave., off Exposition Boulevard, stands Reed Hall, the former home of the late philanthropist Roberta Crenshaw. The storied home is in line for the wrecking ball, despite vocal opposition. (Photo by Jana Birchum)

After Monday night's vote of the Historic Landmark Commission, one might wonder whether Heritage Society of Austin President John Donisi regrets supporting changes to the historic landmark ordinance – changes that could lead to the demolition of a Tudor Revival home once owned by the woman who dedicated her life (and money) to preserving Austin's jewels.

Reed Hall in West Austin – built in 1936 for oilman Malcolm Reed – is a home with a spectacular pedigree and one-of-a-kind architecture, the kind of home intended for protection under the city's Historic Preservation Ordi-nance. It's also the longtime home of the late Roberta Crenshaw, a faithful environmentalist and arts patron who was married to Reed until his death in 1945. But Monday the His­toric Landmark Commission failed to secure the required supermajority vote necessary to recommend historic-landmark designation to City Council. That leaves one of Austin's most storied – and priciest – homes in danger of demolition.

For years, the commission was accused of being too generous with historic-landmark designations, often running afoul of the rights of property owners in preserving Austin's history. In response, council appointed a task force to tighten the code and tax abatements. Donisi sat on that panel, which created new standards such as supermajority votes in owner-opposed cases and stingier formulas for tax abatements. With the new supermajority requirement, the proposed historic designation of Reed Hall needed seven votes from the nine commissioners; it fell two short, passing 5-2, with Rodger Arend and Joe Arriaga opposed, Daniel Leary recusing himself, and Tim Cuppett absent.

"I don't regret the supermajority requirement," said Donisi, who testified in support of the house's historic-landmark status. "I think it is an important provision to ensure the landowner's interests are respected when initiating historic zoning. I do regret that the implementation has resulted in members who recuse themselves essentially counting against the initiation." While the commission generally has the last say in these matters, interested parties have 14 days to appeal directly to council.

Attorney Richard Suttle won this case on behalf of his clients – Richard and Ann Small­ing – by claiming the cost of mold remediation on the home was prohibitive. The owners presented several reports from various consultants who vouched for extensive structural and mold damage. These types of internal damages would not have been caught during initial inspections, Suttle said.

No one, not even Suttle, disagreed that the home was worthy of preservation. And as Commissioner John Rosato outlined during discussion, the two strongest arguments against historic designation – the house can't be viewed from the street and the cost to rehabilitate it might be prohibitive – were not criteria the commission was supposed to judge in its assessment of the property. After the meeting, Donisi also raised similar concerns, saying that the parameters that were to be considered by the commission – such as historic, architectural, and cultural significance – were clearly met.

Speaker after speaker – most of them friends or relatives of Crenshaw – voiced support for the historic designation and challenged the argument that the home was beyond repair. "I've spent a great deal of time at the house over the last 20 years," said Chris Crosby, daughter of the home's most recent owners before its sale to the new owners. "I was there during the move out of the house and witnessed most of the repairs done over the last several years," she said. "At no time was there ever a comment that the house was beyond repair or restoration."

Still, city Preservation Officer Steve Sadow­sky recommended against historic-landmark designation, saying restoration of the house would require tearing it down and building anew. He also noted that one of Malcolm Reed's earlier homes already carried a historic landmark but was reminded, rather sharply, by the women on the commission that this was about Crenshaw, whose achievements went well beyond simply being Malcolm Reed's wife.

Crenshaw, who died in 2005, left Reed Hall in 1980, but the home and the city's early environmental movement are indelibly linked to her. A longtime Parks Board member, she led the fight to create Town Lake trail along with Lady Bird Johnson. She planted the first trees along Town Lake and lobbied for the construction of a foot bridge under MoPac to complete the trail (the bridge is named in her honor). She also founded the Austin Environ­mental Council to save local greenbelts and donated land along the Colorado River.