The Domain as TOD 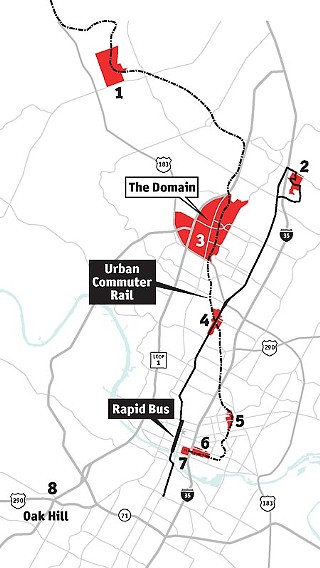 The Domain could be among the commuter-rail stops added to the city's growing list of current and proposed transit-oriented developments.

Call it a "mixed-usage environment," an "activity center," or "new urbanism." Bandy about planning lingo like "polycentrism" – under whatever name, the Domain could become what the city and Capital Metro call a "transit-oriented development," or TOD.

To refresh those whose eyes glaze at planning acronyms: In May 2005, the City Council adopted the TOD ordinance, in order to take advantage of the development possibilities created by the new Capital Metro MetroRail commuter line between Austin and Leander. Major stops along its length would become mixed-use centers; the public transport between them would make them easy to get to, and the combination of retail, residential, and employment would make them appealing places to stay. Rather than segregating houses into suburbia and jobs into the city center, they would be mixed together in these self-contained but connected communities.

The city already has six defined TODs, all north of Town Lake and all connected by planned high-speed transit systems. Oak Hill, the seventh and the first south of the river, was added to the list in March 2006, but its boundaries have yet to be defined. Of TODs currently in progress, the majority – the Convention Center, Plaza Saltillo, MLK, and Northwest Park & Ride – will be connected by commuter rail; the North I-35 Park & Ride will contain the north end of the rapid bus starter line; and the two routes will converge at the proposed transit center at Lamar and Justin Lane. If the North Burnet/Gateway area master plan is adopted, it could become the eighth TOD.

Each TOD, inevitably, has separate demands, different problems, and a different mix between the core components. "No TOD has everything," said Lucy Galbraith, TOD manager for Capital Metro. "Some will primarily be employment centers, some retail or residential. Nobody ever gets everything in there – except maybe Downtown Manhattan."

So what do they have in common? "It's the three D's: density, diversity, design," explained Galbraith. Density isn't about buildings per acre but bodies. It means enough people to make the area feel like a community. There's a psychological factor, that a busy street is a comfortable street. "If you're the only person walking, it can be a little lonely," Galbraith said. "If there's 50 people walking, you feel fine." Similarly, diversity is supposed to reflect not just the usage but the culture of a TOD. "It's incomes, housing types, ethnicity, everything you can find," she added, "because the full range creates the kind of all-day use that makes it a healthy, lively place."

But the third and most critical component is design. Transit plans depend on road design, and a transit plan that hopes to balance public, private, and pedestrian traffic needs to get it right early on, because fixing a road is a lot harder than building it in the first place. According to Galbraith, for a really successful TOD, that means putting people-on-foot first. "There's many technical details, but basically you think about how you make life easy for the pedestrians, and then you fit in everything else."