Did climate-change concerns trump common sense when the city decided to rush a nearly $3 million order for new cop cars?

Tweet
print
write a letter
Did climate-change concerns trump common sense when the city decided to rush a nearly $3 million order to Ford for 188 new "flex-fuel" Crown Victoria police cars, which the city plans to fuel with ethanol?

Ethanol, or, more accurately, E85, a mixture of 85% ethanol and 15% gasoline, is made predominantly from corn in the U.S. It has been a lightning rod for criticism from all angles, mainly for its low energy yield – requiring nearly as much energy (often fossil-fuel sourced) to produce as it yields as a motor fuel – in addition to its mixed bag of air-quality benefits and reliance upon corn, a crop that's heavily subsidized and dependent on lots of water and fertilizer. E85 shows about a 15% reduction in carbon dioxide compared to gas, however, and carbon reduction is tops at City Hall.

Scott Johnson, a longtime local air-quality crusader, took issue with the E85 move. Relaying his corn-powered-cruiser qualms to council, he referenced a 2006 Stanford Univer­sity study that called into question ethanol's global warming benefits and said a large-scale switch to E85 could result in worsened smog and ozone pollution and thus more related deaths. (Read the full study, which was accused of being swayed by ExxonMobil's grants to Stanford, at www.stanford.edu/group/efmh/jacobson/ClimateHealth4.pdf.) Ultimately, the study recommends ditching ethanol in favor of electric and fuel-cell cars, powered by wind and solar energy, for which ample resources exist, it shows. All in all, Johnson concluded that the Dodge Charger V6 police cruiser, which gets an average of about 23 miles per gallon, compared to the Ford's 17 mpg, while offering the same 250 horsepower, is the logical choice. He said the decision should have been vetted by regional air-quality groups and doubts that city staff engaged in a "rigorous internal debate over a Climate Protection Plan-based alternative-fuel mandate versus a better mpg gasoline vehicle." He said he recognizes the mayor and council's yearning for a less-carbon-intensive fleet, as well as the police union's apparent fondness of the Ford's extra space (especially when a dash-mounted camera is installed), but ultimately favors the Charger's efficiency. 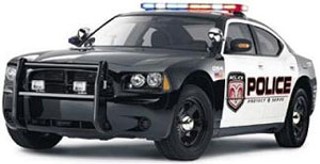 Until Dodge begins manufacturing a "flex fuel," ethanol-compatible version of its Charger, above, an increasingly popular po-po-mobile, the Austin Police Department will be buying none. The department previously purchased six Chargers with the optional "Hemi" engine, in a possible attempt to gain the trust and admiration of local Bubbas. Austin Fleet Officer Tom Wieczorek called the Hemi buys a mistake, explaining that the 340-horsepower hot rod is overkill for the APD's normal duties. Instead, the APD will purchase 118 ethanol-powered Ford Crown Victoria sedans, the law-enforcement land yachts that make up the vast majority of APD's current fleet, not to mention the longtime preference of cops, taxi drivers, and old farts nationwide. – D.M.

"I feel for the city of Austin; they're caught between a rock and a hard place by an industry that's not giving them options," said David Friedman, who heads vehicle research for the nonprofit Union of Concerned Scien­tists. People interested in E85 are presented with what Friedman calls "a false choice: Use a better fuel or get better fuel economy." Most new flex-fuel vehicles are either gargantuan trucks and sport utility vehicles or sorry Americrap sedans, while many of today's popular, economical-yet-sporty compact cars are gas-only. Choosing the latter is a no-brainer for the budget-conscious, especially considering that E85 diminishes fuel economy up to 25%. The fuel is hard to find, too, with only three E85 stations within 25 miles of Austin. (The city plans to spend $200,000 to install three private ethanol stations – not an option for most folks.)

Considering the city's quest for a carbon-neutral fleet by 2020, the flex-fuel Ford, if fueled exclusively with E85, emits 7% less CO2 than the gas-powered Dodge, according to the carbon calculator at FuelEconomy.gov. "Our main concern is what we put into the air," said Tom Wieczorek, the city's fleet officer. Wieczorek acknowledged that smog-forming nitrogen-oxide pollution – once the city's primary emissions concern – is increased at the ethanol plant, but he touted a 15-18% reduction in CO2 tailpipe emissions compared to gasoline – according to the city's research, which he said was a "well to wheel" calculation, taking growing, harvesting, production, and transport into account.

Mayor Will Wynn rounded out council's discussion on the matter by acknowledging the "trade-offs" associated with E85 but emphasizing its "demonstrable well-to-wheel reduction in CO2." He expressed hope that "significant changes" in standard vehicle technology (like plug-in hybrids) are made to allow "a complicated organization like a city" to achieve "dramatic, measurable reductions in all emissions." He clarified that "I am certainly not promoting [E85] for the viable long-term alternative." But regardless, by 2008, much of the Austin Police Department fleet will be running on moonshine's straight-laced cousin, ethanol. 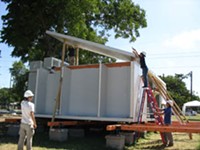