"Just put some bleachers out in the sun, and have it on Highway 61!" – Bob Dylan has come, sung, and gone, along with 130 or so other bands and 65,000 (times three) Austin City Limits Festival fans, leaving ecstasy, exhaustion, sunburn, and mountains of trash in their wake. 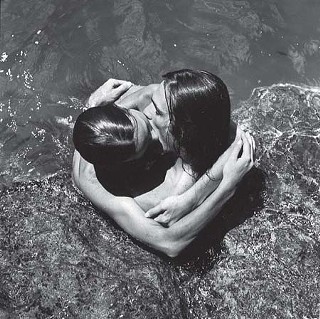 In his new book, Witness for Justice, Austin photographer Alan Pogue offers a poetic essay on the best and worst of the human condition – from social-justice issues to prison conditions to present-day Iraq war horrors. The intrepid photographer has spent the last 38 years capturing the stories of the day, told through the world- weary eyes of the young and old. Like a true documentarian, Pogue also has an appreciative eye for irony and whimsy, which his book demonstrates with refreshing flair. (Photo by Alan Pogue)

• Dozens of bus riders and supporters attended Monday's Capital Metro fare hearing to speak against proposed "adjustments" that would double the basic fare to $1, eliminate charitable discounts, and radically increase fares for the elderly and disabled. See "Point Austin."

• Five UT football players suspended this year for criminal activity is a misfortune – six sounds like negligence. On Tuesday, after a player was arrested for alleged involvement in a robbery and assault, head coach Mack Brown said: "It's really all on me. ... It's obvious I need to be more accountable and do a better job."

• We're No. 48! That was the dispiriting conclusion of a nationwide study of per capita charitable donations by The Chronicle of Philanthropy, which ranked Austin 48th of the 50 largest U.S. cities. On Tuesday, community leaders kicked off the I Live Here, I Give Here campaign at City Hall. 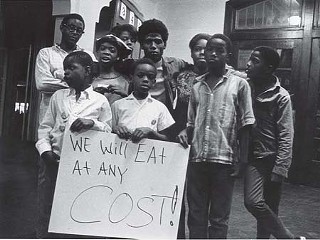 • We may not have time to reach for our wallets because we're stuck in traffic. The Texas Transportation Institute issued its biennial "Urban Mobility Report," naming Austin "the most congested medium-sized city in America."

• Bill Clinton's appeal is still strong – at least on the third floor at BookPeople. On Friday morning, the former president made a public appearance to promote Giving: How Each of Us Can Change the World, his new book on the benefits of private charity and public service. According to BookPeople, about 1,000 people turned up to shake his hand and get their copy inscribed with his signature. Even under the heightened security imposed by Clinton's Secret Service detail and the two-hour time limit, he managed to sign every book and briefly talk to each customer. Like the long line waiting to meet him, he stood through the entire event. It's not Clinton's first book-tour success in Austin: In 2005, when he visited BookPeople to promote his controversial autobiography My Life, the queue was only slightly longer, with 1,300 people getting autographed copies. – Richard Whittaker

• Travis Co. Commissioner Ron Davis has announced he'll seek re-election to the Precinct 1 seat he's held since 1998. It's uncertain whether he'll face any challengers in the March Democratic primary; he handily fended off opposition, including one heavily financed contender, in his 2004 race. Davis, who represents east and northeast Travis Co., cited improved east-west mobility and economic-development initiatives among his achievements. He also took an active role in the county's lawsuit that sought to reverse the congression­al redistricting mess of 2003. The redistricting plan has since been partially overturned. – Amy Smith Another famed example of Austin graffiti art recently succumbed to the paintbrush. We’re talking the female stick figure who jumped to her death on the side of the Stokes Parking Garage at 12th and Guadalupe. The beskirted lass tumbled, twisted, and turned on each floor. Her final landing was painted over years ago, but the entire artwork recently disappeared under dull brown paint. Color it one more sign of the Dallasization of “weird Austin,” more of a T-shirt slogan than a reality these days. We gave the leaping lass a “Best of Austin” award for Best Physical Graffiti back in 2001. May she rest in peace. – Joe O’Connell

• The University of Texas at Austin got a mediocre grade on the Trojan Sexual Health Report Card, which looks at the sex information and health services available at college campuses across the country. The study evaluated campuses on 11 categories, from contraception availability to sexual-assault services. UT placed 53rd out of 100 schools ranked in the survey. The school was lauded for its sexual-assault services, HIV testing, and website but was given a failing grade on providing condoms and outreach services on campus. – Michael May

• Billed as "the next step" for anyone who's seen An Inconvenient Truth, Saturday's Awakening the Dreamer Symposium aims to provide not just the gory facts about our suffering planet but the inspiration to do something about them. Developed in 2003 by San Francisco rainforest-action group the Pachamama Alliance, the symposium has been presented all over the world by trained volunteers, following the same grassroots model as Al Gore, who's been teaching people such as Mayor Will Wynn to present his Inconvenient Truth slide show. Austin EcoNetwork coordinator and events planner Brandi Clark was so impressed last January by Austin's first Awakening Symposium that she committed to co-producing this one. The event's effectiveness, she says, is in its uncanny ability to create an atmosphere – through lectures, breakout sessions, and videos of environmental icons – that spurs participants to action. The equal emphasis on "environmental sustainability, social justice, and spiritual fulfillment" reflects a growing trend among environmentalists to take a more holistic approach to resolving the planet's crises. The approach may be the logical next step not just for those who have seen Gore's movie but for anyone living in this "period of consequences" ushered in, as Gore has said, by the alarming injustices of Hurricane Katrina. Awakening the Dreamer runs from 9:30am to 3:30pm Saturday, Sept. 22, at Casa de Luz, 1701 Toomey; $30 to register, lunch included. See www.awakeningthedreamer.org for more info. – Nora Ankrum

• The Austin Independent School District is rolling out the Strategic Compensation Initiative this school year, which will provide bonuses to teachers at nine campuses if they meet certain performance objectives. The idea of paying teachers for the performance of their students often has received a chilly reception on campuses, but more than two-thirds of the teachers at the nine Austin schools voted to implement the program – perhaps because Education Austin, the teacher's union, has been involved in designing the program from the beginning. The bonuses will be partly based on standardized test scores, but teachers also will design their own performance objectives. They also will be rewarded for staying at some of the district's high-need campuses, which have a high percentage of English-language learners and students from poor backgrounds. As part of the incentive for taking part in the program, teachers at these schools will work with mentors and get additional training. "Teacher quality is the single-greatest factor in predicting student success," said Education Austin President Louis Malfaro in a press release. "This program has the potential to help our district cultivate and retain high-quality teachers over the long haul." The program will be implemented this year at Barton Hills, Hart, Menchaca, Rodriguez, Sims, and Sunset Valley elementary schools; Dobie and O. Henry middle schools; and Lanier High School. The district hopes to have the program at all schools by 2012. – M.M. • Also concerning local teachers, as part of AISD's high school redesign program, the district is increasing the amount of in-service training teachers get, but it's been a challenge finding time to do it. So this year, the district will provide training from 8 to 10am on select Thursdays, and classes will start late, at 10:15am. The first late days will be the next two Thursdays, Sept. 27 and Oct. 4; future dates include: Nov. 1 and 29, Dec. 6, Jan. 17 and 31, Feb. 14, March 27, and April 3 and 10. – M.M.

• AISD has received an $8.6 million grant from the federal government to prevent violence and substance abuse among students. The grant, from the Safe Schools/Healthy Students Initiative, provides funding for the district to offer violence-prevention and drug-prevention activities, student behavioral support, mental-health services, and early-childhood programs. The school district, the AISD Police Department, the Travis Co. Juvenile Probation Services, and the Austin Travis County Mental Health Mental Retardation Center will oversee the program, which begins Oct. 1. – M.M.

• Also, AISD has started a regular evening program for families of children with disabilities. The program offers lectures and discussions on issues like school anxiety, mental health and behavior disorders, autism, and the Special Olympics and will provide support groups for families raising children with visual impairment and those who are raising children of relatives. The meetings will be on the second and fourth Tuesdays of September, October, and November, 7-8:30pm, at the Rosedale School, 2117 W. 49th. Free pizza and child care will be provided starting at 6:30pm. – M.M.

• After Hurricane Humberto hit the Gulf Coast last week, Texas mobilized its rescue forces to save its citizens from the wreckage and its lawyers to save them from fraud and price-gouging. On Thursday, Sept. 13, Gov. Rick Perry declared three counties in the southeast of the state – Jefferson, Orange, and Galveston – to be disaster areas when the Category 1 hurricane made landfall. He dispatched Texas Military Force and Texas Task Force personnel to the area, as well as emergency staff and rescue equipment from the Texas Parks and Wildlife Department, Texas Forest Service, and Texas General Land Office. The following day, Attorney General Greg Abbott issued a warning to retail profiteers and fraudulent charity fundraisers not to take advantage of the situation. He warned in a press release that, during a state of emergency, the Texas Deceptive Trade Practices Act bans price hikes for necessities like food, fuel, and medicine and that investigators with his office will be monitoring the issue. He also warned people outside of the affected areas to be aware of fake charity collectors attempting to solicit donations for the hurricane's victims and reminded them always to check credentials. – R.W.

• Gov. Rick Perry and Lt. Gov. David Dewhurst ceremoniously signed Senate Bill 7 this week, making it mandatory for public schools to have an automated external defibrillator at all University Interscholastic League practices and competitions. An AED is a device that will diagnose life-threatening cardiac arrest and provide an electric shock that can re-establish the heart's natural rhythm. It was an AED that likely saved the life of Westlake High offensive tackle Matt Nader last year. According to a report by the House Research Organiza­tion, 15 students in Texas public schools have died from cardiac arrest in the past decade. SB 7, authored by Sen. Juan "Chuy" Hinojosa, also requires that the Texas Education Agency create a cardiovascular-screening program for sixth-graders and makes schools and officials who use the AED immune from liability. – M.M.