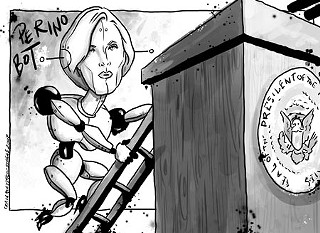 Five years ago I was having lunch in San Diego with a friend, a PR bunny who was pitching high tech companies. She just had quit her agency job, frustrated by her inability to get any career traction in San Diego. She couldn't even get a job on an interesting City Council race, she complained. She was heading to Washington, D.C., without a job, hoping to wangle her way into a government communications gig.

Last week, five years after that lunch, Dana Perino was named the spokeswoman for the Leader of the Free World, the press secretary to the president of the United States. She succeeds Tony Snow, who rose to the White House's top podium through the mean streets of Fox News punditry, assuming the role that made stars of Ari Fleischer, Dee Dee Myers, and the ever feisty Marlin Fitzwater. At 35, Perino will become only the second woman to serve as press secretary.

On one level, Perino's rapid accession certainly provides further evidence that the Bush administration has been the land of opportunity for midlevel staffers, a Washington, D.C., where those old bugaboos of achievement and experience are not as important as loyalty and faith. For the true believers who make it into the administration's skimpy Rolodex, any dream is within reach. Another couple of years, and Perino probably would be nominated for the Supreme Court.

And I have little doubt that Perino is a true believer. When I talked to her last year, she told me how she had learned to appreciate the president's "dogged determination" to keep his sights on specific goals and his belief that if you "say the same thing over and over and over again," you eventually get your message across.

Perino can say things like that with complete sincerity and without a lick of smarm, which, in many ways, makes her an ideal administration mouthpiece. And that's all she wants to be. When she left San Diego, she told me her goal was to get a job as a spokeswoman. It sounded a bit odd at the time, but she wasn't interested in the other vagaries of politics or media manipulation. She wanted to be at the podium, representing a cause, fielding questions.

Some in the Beltway may grumble at her lack of D.C. experience, but there is little doubt that she's a perfect fit for her new job. She's a robo-spokeswoman, completely unflappable, able to maintain a pleasant smile even as she bitch-slaps a reporter who refuses to accept her vague and noncommittal answer. She is a master at refusing to take the bait when reporters fish for a sound bite. Relaxed and confident at the podium, she appears not to possess the sweat gene, an essential gift for a spokesperson.

The one thing that is not clear from her public persona is this: She is tiny, wee, munchkin short. Her appearance on TV is another White House-orchestrated ruse. They must have her standing on a stepladder at the podium. In many ways, she is a sort of a Bizarro World Republican version of Annabeth Schott, the tiny, blond media dynamo in The West Wing. ("Who?" Perino asked when I mentioned this to her; apparently no one in the White House watches The West Wing.)

When she left San Diego, Perino landed at the Department of Justice, specializing in energy and environmental issues. Two years later, it was her background on the environment that got her into the White House, when she was hired for the counsel's office and given the seemingly impossible task of improving the administration's image on environmental policy.

While she may not have a lengthy D.C. résumé, she has undergone a lengthy trial by fire, representing an unpopular, scandal-ridden president. Most recently, Perino was the White House's sacrificial lamb when Vice President Dick Cheney, refusing an order to turn over documents, took the widely derided position that the vice president is not a member of the executive branch. Her complete unwillingness to answer questions – invoking the classic, trapezoidal, double-twisted, "I'm not a lawyer" technique – earned her quality mocking on The Daily Show. But it almost certainly played well with her bosses, who covet people who can stick to the talking points.

At some point, it must have dawned on the Bush brain trust that a cutie press secretary who refuses to deviate from the message of the day might be a better face of the admini­stra­tion than past choices. Unencumbered by a massive ego, she certainly won't indulge in the mental sparring and snippy tantrums that seemed to grip Snow. Nor will she project the agony of Scott McClellan, the oft-sweaty Austinite who always seemed horribly overmatched by the press corps Jon Stewart dubbed "America's 3-year-olds."

Last year Dana spoke of McClellan, the quintessential good soldier, as her mentor. "One of the things I learned from Scott is that no matter what happens, when you leave the briefing room, it's all jokes and laughs again," she said.

She'd better hold on to that lesson, as she becomes the face of a failed administration's final days. Personally, I wish her the best of luck – she's going to need it.