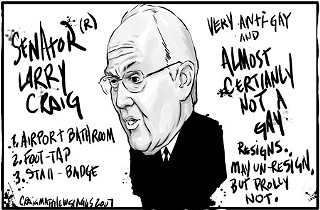 First the national Republican Party was divided over how to deal with the recent arrest of noted anti-gay-rights Sen. Larry Craig. Now a prominent Texas Demo­crat­ic gay-rights group is equally split over the arrest of its most senior officer for a sexual offence.

Shannon Bailey, president of the Texas Stonewall Democratic Caucus, was spotted by Dallas police on June 14 at White Rock Lake Park in Dallas, allegedly engaged in a sexual act. He was later charged under the Texas penal code with public lewdness, a class A misdemeanor that can result in a $4,000 fine and up to a year in jail. The case has yet to come to trial. Due to the circumstances of the charges against Bailey, however, the caucus executive board decided to remove him as president. "Ultimately, the arrest re-enforces negative stereotypes," said Christina Ocasio, board member and president of the Stonewall Democrats of Aus­tin. "The mere allegation is bad for us."

On Aug. 25, the board held a general meeting in Austin to discuss Bailey's position. After a 5-4 split vote, they sent Bailey a letter on Aug. 27 requesting his resignation as president. On Sept. 3, after what he described in his written response to the board as "soul-searching and discussions with friends," Bailey said he refuses to stand down, as he does not feel the pending court case will prevent him from fulfilling his duties as president. The caucus has not decided on its next step, but Ocasio confirmed that Bailey could be removed by the board or by the general membership or face censure. A decision may be made at the next board meeting on Sept. 30.

That the case has come at the same time as Craig's arrest is, according to Ocasio, an unfortunate coincidence that complicates the matter. "Whenever you have a national issue happening at the same time as a local issue, there's always going to be some commingling," Ocasio said. Beyond any superficial similarities between their arrests, however, the real question is Bailey's failure as a caucus officer. "This incident has brought to light a lack of leadership by Shannon, because after the arrest, he stopped talking with the board," Ocasio said. "The first communication we had was when he tried to stop our August 25 meeting. In fact, he threatened legal action."

Bailey was contacted but did not return a request for comment.