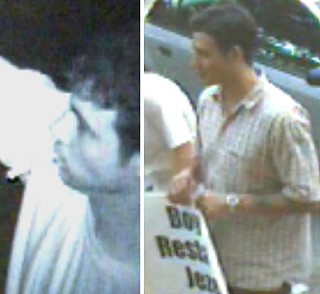 Stills from this surveillance video shows a man police have identified as Joshua Rosenberg defacing the window of Restaurant Jezebel, causing some $2,800 in damages. Police say Rosenberg also picketed the restaurant (shown in photo at right) the evening before the Aug. 29 incident. Rosenberg, who was protesting the restaurant's sale of foie gras, faces a felony charge of criminal mischief.

Animal-rights activist Joshua Rosenberg was arrested Tuesday in connection with a vandalism incident at a Downtown restaurant that sells foie gras, a rich but controversial liver delicacy gleaned from force-fed ducks.

As of Wednesday, Rosenberg, 29, remained in the Travis Co. Jail on a felony charge of criminal mischief, under a bond of $20,000. Police say Rosenberg is the man seen in a surveillance video defacing the plate-glass window of Restaurant Jezebel on Congress Avenue early in the morning of Aug. 29. The restaurant's security cameras also had captured Rosenberg protesting outside the restaurant about eight hours earlier. Restaurant owner and chef Parind Vora says the suspect applied acid to the restaurant's front window before etching the words, "Spit it out," onto the glass. The suspect apparently believed he had evaded surveillance cameras when he sliced the main power breaker for the restaurant, housed in a historic building at 914 Con­gress. But the cameras never blinked. "I have battery backup," Vora said cheerfully. As the cameras rolled, the suspect, a cigarette dangling casually from his mouth, went to work on the window.

A similar vandalism incident in July also targeted Jezebel, among several other Downtown restaurants, for selling veal, and Vora decided to upgrade his security system. Police say that a website that posted photos of a string of graffiti-tagged restaurants was registered in Rosenberg's name. Rosenberg also has a MySpace page, where he describes himself as a newcomer to Austin who does carpentry work. "In my spare time," he writes, "I like to read books, ride my bike, fight for human and animal rights, and go to parties." Rosenberg is also being questioned about the other vandalism cases. Despite the arrest, a group called Central Texas Animal Defense vowed to continue its twice-weekly protests in front of the restaurant, where they've been picketing against the sale of foie gras since June. "No matter the outcome of the police investigations, there will be no justice until Restaurant Jezebel stops supporting the cruel foie gras industry," CTAD leader Noah Cooper said in a statement issued last week. Cooper has sought to distance his group from the vandalism incidents, saying he doesn't condone them. Austin Police Department Detective Mike King said Cooper isn't considered a suspect in the case, adding that Cooper has been helpful in the investigation. King said he's also looking at others who may have served as Rosenberg's accomplices.

Despite the two vandalism incidents and twice-weekly protests in front of his business, Vora says business has tripled in the few months since the protests and vandalism began. Additionally, he says foie gras sales are doing so well that he's started retailing the delicacy at $45 a pound. Vora says he is the only foie gras retailer in town.

"People are ordering foie gras even when they would not normally, because of the heavy-handed tactics of Mr. Cooper's group," he said. Removing foie gras from the menu is simply not an option, he said. "I have had foie gras on my menu in every restaurant I've been at. It is de rigueur for fine dining."

In response to the recent uptick in vandalism cases, the Austin chapter of the Texas Restaurant Association has offered a $10,000 reward for information leading to the arrest and conviction of anyone caught defacing a restaurant for selling foie gras or any other meat products.

If Rosenberg is convicted of the offense, Vora would be the likely recipient of the reward fund, which includes his contribution of $500. But Austin chapter President Bryan Poff said Vora already has turned down the reward, asking that it remain in place in the event of other vandalism incidents. "Since this first started," Poff said, "I've heard so many people say, 'Gee, I've never had foie gras, but now I'd like to try it.'" 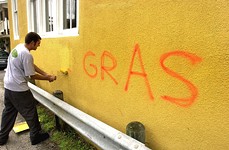