Guns, Disaster, and the Lege

Tweet
print
write a letter
On Sept. 1, Senate Bill 378, aka the Castle Doctrine, came into effect in Texas. It increased the ability of citizens to use deadly force in their home. But another potentially significant gun-rights bill slipped through the Lege with little opposition and almost no coverage, and somehow its advocates used the events of Hurricane Katrina to push it through.

SB 112 says that during an official disaster, the state cannot seize legally owned guns from private citizens. "In the aftermath of Hurricane Katrina," writes bill author Sen. John Carona, R-Dallas, "when law enforcement resources were stretched thin, many law-abiding Louisiana residents were subject to having their personal firearms confiscated by law enforcement." After the hurricane hit, New Orleans Police Superintendent P. Eddie Compass ordered all privately held weapons be handed over. He later explained that this was intended to reduce tension and ease relief and evacuation operations. At the time, there were rampant allegations of looting and violence throughout the city, and gun-wielding groups such as the self-declared Algiers Point militia were roaming their neighborhoods on armed patrol.

Within days, the National Rifle Assoc­ia­tion and Second Amendment Foundation took Compass and New Orleans Mayor Ray Nagin to court, demanding that all weapons be returned. On Sept. 23, 2005 – less than a month after Katrina had devastated New Orleans and the day before Hurricane Rita made landfall – U.S. District Judge Jay Zainey ruled in the gun lobby's favor.

The following June, Louisiana Gov. Kathleen Blanco signed a bill banning such seizures. Since then, other states have passed similar bills. There is even a federal version, passed as part of the 2007 Depart­ment of Homeland Security Approp­ria­tions Act, covering federally declared major disasters. According to Steven Polunsky, Senate Trans­portation and Homeland Security Committee director, the Texas bill was brought to committee Chair Carona by the Texas State Rifle Association. There was no state law saying officers had the right to seize weapons, however. "The law was silent," Polunsky said.

SB 112 passed through the Lege with only one "nay" vote, cast by Sen. Jeff Wentworth, D-San Antonio. He didn't have a problem with the bill, only with the fact that legislators suspended the Senate's three-day rule on debate to pass it quickly. Gov. Rick Perry supported the legislation, even though it could limit his authority during a disaster, and signed it into effect on April 27. There has even been a lack of opposition from the gun-control lobby. "We don't have a problem with it, and that's probably why it sailed through the House and the Senate," said Richard Leal, board member of Houston-based Texans for Gun Safe­ty. "This is an issue of whether a police officer comes on your property and asks if you have a gun, what right does he have to confiscate it just because there's a disaster." 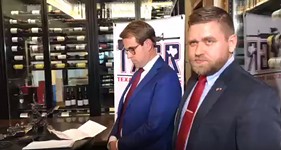 Guns, Property, and Public Nuisances: A North Austin Showdown
Gun rights activists up in arms over shutdown of gun show