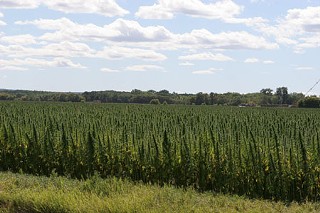 The U.S. Drug Enforcement Administration has just one day left to file its first response to a federal lawsuit brought by two North Dakota farmers who want to cultivate industrial hemp – and who want the DEA to back off and butt out – before the Aug. 24 deadline. David Monson, a third-generation farmer and veteran Republican state representative from the northeastern corner of the state, and Wayne Hauge, also a third-generation farmer from the northwestern corner of the state, filed suit in Bismarck in June, in essence asking a federal judge to tell the DEA that its power to enforce drug prohibition (under the federal Controlled Substances Act) does not give it the power to regulate a purely agricultural endeavor to cultivate hemp, the nonnarcotic cousin of marijuana.

Unlike pot plants, which are bred to produce high levels of tetrahydrocannabinol, or THC, the plant's main psychoactive ingredient, hemp plants are bred for seed, oil, and fiber – for use in consumer and industrial products – from plants that contain no more than 0.03% THC. This reality hasn't exactly impressed the DEA, which asserts that the law doesn't specifically differentiate between the two strains of plant (which isn't entirely true – the law "exempts" from regulation "mature" parts of the plant that are not consumed as a drug) – and that nowhere in the law do the terms "hemp" or "industrial hemp" even appear. (This is true but provides the agency only a fairly thin semantic argument that focuses on reading the law but not any comprehension of its meaning.) The law does allow farmers and/or researchers to apply for DEA permission to grow the crop, but the DEA hasn't exactly embraced this regulatory provision. (The only hemp-cultivation license the agency ever approved expired long ago.) In 2006, North Dakota enacted its own hemp-growing regulations, allowing farmers to apply for a license to grow the crop. The North Dakota rules are fairly strict – patterned after a successful Canadian law that reauthorized hemp farming there in 1997 – requiring farmers to pass a criminal-background check and be fingerprinted, to provide global-positioning-system coordinates for their fields, and to agree to allow state officials (including law enforcement) unfettered access to their crop in order to ensure they're not growing narcotic dope. Monson and Hauge were the first to jump through the regulatory hoops and to earn the state's first-ever hemp-farming licenses. That was back in January; a month later they applied for DEA permission to farm the plant – reminding officials that the growing season in North Dakota is short and that if the agency didn't get back to them in a timely manner – by April 1 – there would be little chance they could grow this year. (Since the license must be renewed annually and requires a nonrefundable application fee of around $2,300, any stalling on the DEA's part would also mean the farmers would lose their money and be forced to come up with another two grand if they wanted to try again next year.) At press time, the agency still hasn't issued any decision. In fact, the only communication the DEA has provided is to explain all the reasons it would be impossible to impose a strict timeline on their deliberation. In mid-June, Monson and Hauge filed suit against the agency, challenging the DEA's authority to regulate their agricultural concerns.

The DEA's stall tactics are nothing new – the agency is notorious for its ability to endlessly rearrange the deck chairs on its bureaucratic Titanic. In fact, the agency has yet to rule on an application filed in 1999 by North Dakota State University, which was seeking permission to grow a test tract of 144,000 plants. On July 27, NDSU officials dove back into the game, writing a letter to the DEA to urge the institution's "strong support" for Monson's bid to obtain a federal hemp-farming license. "NDSU continues to believe that cultivation of industrial hemp would create significant economic and business opportunities for the state's farmers," Kenneth Grafton, NDSU dean and director, and Burton Johnson, associate professor in the Plant Science Department, wrote. "Granting Rep. Monson's application would serve the interests of the state's farmers" and would allow NDSU to "carry out its statutorily mandated" hemp research. Granting Monson's application would "clearly be consistent with the public interest" and would not present any "risk of diversion of any controlled substances into other than legitimate industrial channels," they wrote. And there is "no danger whatsoever that any drug marijuana would be cultivated in this field, the location of which is set forth in the license" and thus open for inspection. At press time, the DEA had not responded to the letter.