Changes and rumors of changes to the North Lamar Transit-Oriented Develop­ment Zone abounded at a meeting of the Crestview Neighborhood Association last week. Well, not so much rumors as proposals, with nothing written in stone.

One – as explained by Mike Blizzard, a spokesman for Crestview Station LLC (a mixed-use development on the former Huntsman site, centered around the planned Capital Metro commuter-rail stop at Airport and Lamar, being developed by Trammell Crow and Stratus Properties), and Sonya Lopez of the city's Neighborhood Planning and Zoning Department – involves a land swap between Austin Energy and Crestview Station for the location of an electric substation necessary to meet the neighborhood's current power needs. Currently, AE owns a pole yard on Justin Lane, within the borders of the TOD and right across the tracks from where the rail stop will be. The pole yard – basically, a lot where AE stores surplus equipment – is about as far from the city's vision of vertical, mixed-use transit-oriented development as it could possibly be – and so would a power substation. AE says a substation must go somewhere in the vicinity, however, so a piece of Crestview Station property farther north up Lamar (and more distant from the rail stop) was identified as a better site.

It's not a done deal – both Crestview Sta­tion and AE have to sign off on it, and rezoning for both properties must be approved by City Council – but given the city's desire to see density near the MetroRail stops, this would seem to be a foregone conclusion. Blizzard says if the swap goes through, it's uncertain what might go into the pole-yard location. For now, Crestview Station has no plans for the site, since it's completely focused on completing its current project by next year, Blizzard said. At a recent citizens planning charrette focusing on station-area planning, prevailing sentiment was that the pole yard should only be converted to residential uses.

Lopez also detailed several proposals the charrette came up with for changing the traffic flow around the Airport/Lamar intersection. The one that really perked up ears at the neighborhood association meeting proposed doing away with Airport Boulevard's dead end at Lamar and veering Airport directly into Justin Lane. It's important to remember that these are merely ideas floated in a brainstorming session, but if the city were to actually pursue that change, one could expect a whale of a fight – the general sentiment among Crestview residents is that traffic on Justin (a popular cut-through from Lamar to Burnet Road) is already too high, and the neighborhood association has been staunchly against such proposals in the past. 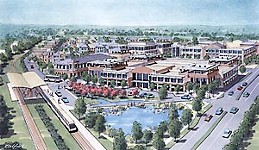 Crestview at the Crossroads
Near north neighborhood faces redevelopment transformation