Think (and Eat) Globally by Dining for Darfur 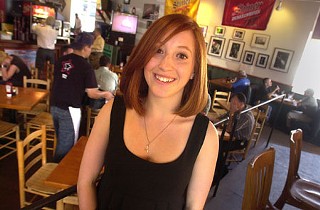 One night in April, 19-year-old Alexandra Winkelman was having dinner with her family at Asti in Hyde Park when she hit upon an idea to do a good deed. That night, Asti was donating a percentage of all its sales to assist employees of Mother's Cafe & Garden, who were out of work after a fire in March temporarily shuttered the neighborhood restaurant. As the Winkelman family left Asti that evening, Alex and her mother started discussing how they might use a similar humanitarian event to raise money to help victims of violence in Darfur. "As long as I can remember, I've been aware of the genocide in Darfur," Winkelman says. "I wanted to find a way to do something about it." She did some research, found a group in New York City that created Dining for Darfur, and decided to use that model to organize a similar event in Austin.

First she approached the Jewish Community Relations Council of the Jewish Community Association of Austin and received its pledge of support. As she continued making phone calls, she found other willing partners. It was clear she wasn't the only one looking for a concrete way to help the people of Darfur. Four months and dozens of phone calls later, the Austin version of Dining for Darfur will make its debut Monday, Aug. 27. Through Winkelman's efforts, 28 restaurants were recruited for the daylong event, along with five major sponsors and more than 30 different supporting groups, individuals, and elected officials across the religious and political spectrum.

As the event organizer, Winkelman has had help from many in the JCAA, including her parents, community activists Suzanne and Marc Winkelman; her 16-year-old brother, Jacob; and her 22-year-old sister, Elisabeth. In fact, it may have been Alex's sister who served as the true inspiration for this event. When Eli was a student at Claremont Scripps College in California, she created the nonprofit Challah for Hunger, which sells bread every Friday and donates the proceeds to the American Jewish World Service Emergency Appeal for Darfur. The student group has raised more than $20,000 so far. Perhaps as importantly, they offer their customers a discount if they call or write a letter to an elected official or media affiliate urging action against the genocide in Sudan. Chapters of Challah for Hunger have branched out at other colleges, including UT-Austin. The UT chapter is coordinated by two Jewish student organizations, Texas Hillel and the White Rose Society, which is recognized for its Genocide Awareness Campaign and its organized protests of the genocide in Darfur.

All proceeds from Dining for Darfur will go to the American Jewish World Service Emergency Appeal for Darfur. Winkelman says her fundraising goal for Monday is $10,000. She adds that Dining for Darfur also will receive "a very generous contribution" from the JCAA, which will give 10% of the proceeds from its annual Fall Fusion event Sept. 9 to Dining for Darfur, in honor of Alex's parents, who will also receive this year's LBJ Humanitarian Award.

Efforts to aid Darfur also extend to other corners of Austin this month. St. Catherine of Siena Catholic Church will host a similar event, Dining With Darfur, at 6:15pm Sunday, Aug. 26. Participants will share soup, bread, and water – a meal that the church describes as "meager by our standards, bountiful by theirs." Proceeds from that event will support Catholic Relief Services' efforts in Darfur and Chad.

Additionally, there is an active Austin chapter of the Save Darfur Coalition, which meets on Wednesdays at 5pm at Texas Hillel, 2105 San Antonio St.

Granted, with hurricanes threatening the Texas coast during these hot, waning days of summer, it's hard to wrap your mind around the bloodshed and violence in Sudan. But it's good to know there are opportunities to make a contribution – however bountiful or meager – to the cause of ending the slaughter of hundreds of thousands of civilians in Darfur.

See www.shalomaustin.org for participating restaurants and other info. 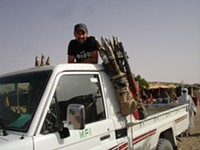 Dispatches From Darfur
Austinites Rio Tenango and Leah Pries take their activism, and their aliases, all the way to Africa 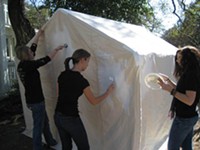 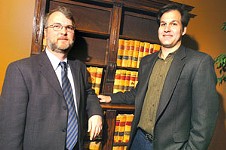 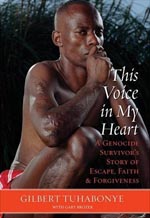 This Voice in My Heart
A Genocide Survivor's Story of Escape, Faith and Forgiveness