The grand jury answers one question – many more to come

No indictment does not mean no problem.

Last Thursday, Aug. 9, a Travis Co. grand jury absolved Sgt. Michael Olsen of criminal responsibility in the June 3 shooting of Kevin Brown after a foot chase from Chester's Club on East 12th. That's hardly the end of the matter, as both the Austin Police Department and the U.S. Department of Justice are proceeding with additional inquiries, a standard procedural review from the APD while the DOJ pursues a broader APD use-of-force investigation that began before the Brown shooting. The Office of the Police Monitor will undoubtedly review the case, and an attorney for the Brown family has promised a civil lawsuit. So the "no bill" is far from the last word on the death of Kevin Brown and the events that led up to and away from that death.

It was never likely that Olsen would be indicted. Not simply because cops are seldom held criminally responsible for actions in the line of duty but because from the currently public evidence, the salient questions about Olsen do not seem to be criminal ones. Based only on what we know now -- and there remains some uncertainty about the completeness of that information -- Olsen may have been guilty of overreaction, or even panic under pressure, but it does not appear he was guilty of criminally negligent homicide. Unfortunately, that's far from a clean slate for an officer already under scrutiny for prior use of excessive force. New APD Chief Art Acevedo will have his hands full sorting out the details of his first major disciplinary inquiry.

Very briefly, the major facts are as follows. Chester's employees told Olsen that Brown appeared to have a handgun, previously brandished by someone else in an altercation at the club. When Olsen tried to accost him, Brown broke away and took off running into a nearby apartment complex. Olsen headed Brown off from another direction, and when he confronted Brown, still in flight and perhaps reaching for the gun (which he in fact no longer possessed), Olsen says he feared for his life and fired. By then Brown had turned away, was hit in the back, and fell facedown and away from Olsen. At that point, Olsen testified, "I paused and hesitated, especially because [Brown] was on the ground and facedown, before making the decision to shoot several more rounds to ensure I ended the threat. I remember thinking that I really didn't want to have to shoot him again but that I still felt that he was trying to get at a gun and was still a threat to my life." Brown was hit twice in the back, and from the autopsy as well as the statement of another officer, it appears likely that the kill shot was in that second barrage.

Olsen's statement has the ring of truth, not only because it fits the physical evidence (and other testimony) but because he readily could have embroidered it in ways more exculpatory of his own actions. Having first reacted and shot immediately in response to Brown's actions -- and after warning Brown several times to stop and show his hands -- he says he hesitated and then decided to shoot "several more rounds." In the APD and Police Monitor review, there should be plenty of questions raised about that secondary decision. Honest answers would seem unlikely to help Olsen keep his job.

There are also plenty of larger questions. Immediately after the no-bill announcement, Nelson Linder of the Austin chapter of the National Association for the Advancement of Colored People angrily denounced the mostly minority grand jury's refusal to indict Olsen as "despicable and cowardly." When I spoke to Linder this week, he was more measured, saying he believes the jury members failed to be proactive and fully investigate this shooting, in contrast to the grand jury that thoroughly investigated the 2003 shooting of Jesse Owens by Officer Scott Glasgow. He added that he believes Olsen "typically overreacted personally," appeared to violate APD use-of-force policies "in five or six ways," and should be terminated. Linder also called for better tactical training of officers in their reactions to these critical situations.

The NAACP has joined the Texas Civil Rights Project in calling for an independent prosecutor for this and other use-of-force investigations. Wayne Krause of the TCRP accused Travis Co. District Attorney Ronnie Earle of failing to present all the relevant evidence and more broadly criticized the secrecy of the grand-jury system as preventing real due process and true public oversight. "We're not talking about deciding guilt, but there is certainly sufficient evidence to issue a criminal indictment," Krause said. "Then investigate it as a criminal case, and let the system of justice do its work. If anybody else but a cop did this, that's what would happen."

Nonetheless, the recent record of ordinary Travis Co. juries on police use-of-force cases is not exactly reassuring. To my mind, this incident looks less like the Scott Glasgow/Jesse Owens shooting -- much more egregious in fact and apparently mishandled afterward by both the justice system and the APD -- and more like the Julie Schroeder/Daniel Rocha shooting, in which an officer under instantaneous pressure made a panicked decision that ended in the killing of an unarmed man. In the end, Officer Schroeder was terminated by then-Chief Stan Knee. Here again, Olsen's shooting of what proved to be an unarmed Kevin Brown, facedown on the ground, after he was already subdued, helpless, and perhaps dying, certainly looks (admittedly in hindsight) like a terrible decision with an irreversible outcome.

We grant police officers the power to act with deadly force, on our behalf and in our names, and an armed man fleeing through a residential neighborhood in the middle of the night is no trifling matter. By the same token, we must hold that life-and-death responsibility to the highest possible standards, and, on the face of it, in the shooting of Kevin Brown, those standards were not upheld.

No indictment does not mean no culpa­bility. 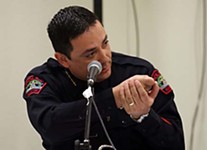 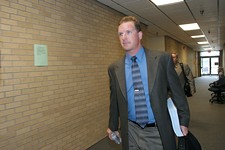