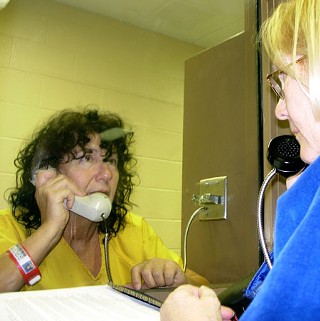 With the Texas Youth Commission scandal and a damning U.S. Justice Department inquiry into the Texas Department of Aging and Disability Services, state prison and residential facilities have come under heavy criticism. Now an Austin-based inmates' rights group hopes to shine daylight on inhumane conditions and mismanagement in county jails.

The Texas Jail Project, founded by activist Diane Wilson and journalist Diana Claitor, plans to document the conditions in the state's 255 county jails. The Texas Commission on Jail Standards' statistics show that roughly 48% of 72,966 inmates as of July 1 had yet to be convicted or charged. Instead, they were held on pretrial detention. "These aren't all hardened criminals," said Wilson. "They go in there; they haven't seen a judge or a lawyer; they're poor; nine times out of 10 they're from a minority [group]. They haven't even been convicted of a crime, and they're being treated like the scum of the earth."

The Jail Project began with a note that Wilson slipped to Claitor in December 2006. At the time, Claitor was visiting Wilson while she was incarcerated in the Victoria County sheriff's detention jail. Wilson, a Gulf Coast shrimp-boat captain-turned-eco-activist and founding member of CodePink, a peace advocacy group, had been picked up on a 2002 warrant for criminal trespass. The charge stemmed from Wilson's protest against pollution from a Dow Chemical Co. plant near her hometown of Seadrift on the Gulf Coast.

A veteran activist with 19 arrests under her belt, Wilson was no stranger to the law. "I'm not a little naive kid," she said, "but I was traumatized by what I saw and how brutal and uncompassionate it was."

When first arrested, Wilson was taken to the Harris County Jail and put in a 10-foot-by-20-foot holding cell with 50 other prisoners. "It was 55 degrees, but they take your shoes," she said in a recent telephone interview. "Women were using trash to wrap around their bodies to keep them warm. They didn't give you a blanket or a sheet or underwear. All you had was your uniform."

Once in Victoria, she was left in a concrete cell with no daylight and only a thin mat for bedding. After three days, a departing inmate gave her a dirty old blanket. Three days after that, she was finally issued a rudimentary cleaning kit. Her situation was not unique: Inmates dealt with brutality, overflowing toilets, and spending months locked indoors without any exercise time or recreation, Wilson said. There was often no access to lawyers and no law library. Prisoners were afraid to complain or didn't know how. Guards, dramatically overstretched at a state-recommended inmate-to-staff ratio of 48 to 1, either ignored requests or lacked the training or knowledge to process them.

Wilson managed to slip a note of these conditions to Claitor, who sent copies to Victoria Co. Sheriff T. Michael O'Connor, the county judges and commissioners, and even the White House. In the note, Wilson told not just her story but those of other inmates. That was the inspiration for the Texas Jail Project -- to collect and retell these stories of abuse. "If you're going to have any changes, you need a way for people to tell what happened to them," Claitor said. "There's nobody to tell that to but us."

According to Claitor, the Texas Commission on Jail Standards, the state oversight body, has failed to fulfill its responsibilities and does more to protect management than inmates. Unlike prisons, the state has very limited powers over locally staffed and funded county jails and may be claiming even less authority than allowed.

At the commission's Aug. 2 public meeting, board chairman and Sheriff David Gutierrez of Lubbock told the assembled audience of county commissioners, sheriffs, and jail managers that "this agency is here to help you deal with liability issues. That's our main purpose." However, when Lance Hunter Voorhees, a chaplain with Taylor Co. Detention Ministries, asked Attorney General Greg Abbott to investigate claims of physical abuse, he was told that was the commission's job.

But according to Claitor, whenever she asked the commission members about their role in investigating inmate abuse, they either told her it was not their responsibility, or they simply stonewalled her.

TCJS concentrates most of its energy on overcrowding, and while Claitor agrees that is a problem, it may not be the most important issue. "The preponderance of e-mails we get are about medical issues," said Claitor, "where people say, 'My sister's not getting her high-blood-pressure medication' or, 'My brother's not getting treated for his seizures.'"

A 2006 U.S. Justice Department report into Dallas County Jail conditions found that health care was so insufficient that several inmates had died of treatable diseases. Yet at its Aug. 2 meeting, the commission addressed only one health-related issue: to loosen the requirement for jails to conduct mental-health checks on certain classes of prisoners. Overall, though, the commissioners talked mostly about capacity and how to increase it.

On Aug. 12, the Texas Jail Project will hold a fundraiser and awareness-raising night at Jovita's, 1617 S. First. It's these types of events, not direct lobbying of legislators, that Wilson and Claitor hope will lead to substantive changes in jail conditions. "We have to make conditions humane," Claitor said. "We have to educate people and law enforcement that it's not coddling prisoners to give them clean water or a blanket when it's cold or feed them after they've done a nine-hour shift in the fields."