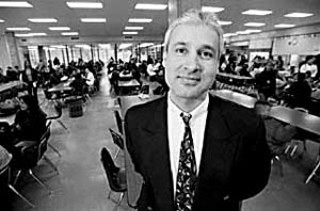 Former Johnston High School principal Sal Cavazos is known for big goals, and his latest goal is the biggest one of all: to build a community center and charter school in East Austin that will revitalize the Govalle/Johnston Terrace community.

Who could be opposed to such generosity? Here would be a place that East Austin residents could call their own, a place where the children of the Govalle/Johnston Terrace neighborhood would belong, instead of being bused far away to West Austin schools. Here, finally, would be a solution to rejuvenate a declining neighborhood and revitalize a flagging Johnston High School, which just posted its fourth year of failing test scores.

At a city public hearing on the use of federal-housing funds last month, Cavazos and community members begged City Council to step up and fund the East Austin community project, which includes the Southwest Key charter school. To Cavazos, who will serve as the charter school's principal, the problem at Johnston is obvious. His solution is one that the neighborhood has embraced.

Cavazos wants to bring those children back to a new and stronger Johnston, and he'll do it with the $6.1 million East Austin Community Development Project. The project, which has received federal funding in past years from council, also includes public space, meeting rooms, a technology center, and community cafe.

The project already is under construction on 7 acres in the 6000 block of Jain Lane. There's just one little catch. Cavazos and his employer, the nonprofit Southwest Key Programs, came to council to ask for another $800,000 to complete construction.

Such a grant doesn't seem so impossible, given council's impulsive forgivable loan of $750,000 for Las Manitas. And from the crowd of red Southwest Key shirts at last month's council meeting, it was clear Cavazos had the street credentials to get the Govalle/Johnston Terrace neighborhood behind him, along with former Mayor Gus Garcia. To say no would mean looking into the eyes of people like Garcia and the Rev. Johnny Townsend of the Solid Rock Missionary Baptist Church, who begged council to continue its support of the East Austin project.

"I would ask, council, that you and Mayor [Will] Wynn, please do what you've done in the past. I ask you now to just find a way to fund this program. Don't delay it," Townsend said. "We're anxious to get in it. We need to utilize these facilities."

But Southwest Key has a set of challenges that were abundantly clear during the hearing. First, Southwest Key may be a nonprofit corporation, but it's also in the business of housing children who enter the country illegally without parents or guardians and end up being detained by immigration officials. Southwest Key calls its facilities "shelters"; others, like Rita Gonzales-Garza of League of United Latin American Citizens, call them "detention centers."

And there's a little business about income. According to the most recent reports to the Internal Revenue Service, Southwest Key had $48 million in federal contracts last year and a chief executive officer with a salary of $200,000. While Cavazos insists the vast majority of the nonprofit corporation's dollars go directly into feeding, clothing, and sheltering clients while their cases go forward, it still raises the question as to whether council should draw up a policy to determine who is needy enough to qualify for assistance.

Others question why Southwest Key is asking the city to pay for a building that includes its own corporate headquarters. Cavazos says the relocation of Southwest Key's headquarters is at the request of neighborhood residents -- who want a long-term community commitment from Southwest Key -- and that the company's employees already have committed up to $1 million toward the project's construction.

Former Austin Independent School District trustee Diana Castañeda, who spoke at last month's hearing, is upset that Southwest Key is willing to suck support away from the community's existing public-school system and do it on the public dime. Castañeda is skeptical of Cavazos' track record -- he left Johnston midyear -- and she says building new schools in East Austin is a waste of resources, given the fact that the Austin school district already has facilities that can be shared with Southwest Key.

Cavazos brushed aside Castañeda's criticism, saying he is committed to Southwest Key over the long haul, and even if he were not, the program is strong enough to continue without him. And after some pressing, Cavazos does admit that the co-sharing of an existing Austin school -- possibly a wing of Johnston High School -- is possible. The proposed charter facility at the East Austin campus can only hold sixth grade.

At last month's council meeting, Paul Hilgers of Neighborhood Housing and Community Development explained that the city no longer carries public-facility funding on the books for its federal-housing block-grant funds. The mayor promised Cavazos the city would look into possible alternative funding sources for the school, which, to Cavazos, signaled a commitment from council that the city would find a way to help Southwest Key complete the project.