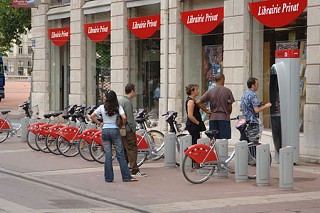 Free Transportation Cycling: To use one of 3,000 bikes at about 200 locations in Lyon, France, some 15,000 users each day just swipe a cash card or member card at an ATM-like kiosk to get a bike -- and 90% of the bike commutes are free. (Photo by JCDecaux)

Like many another American traveler in Europe, I found fresh cross-cultural inspiration this summer visiting older, denser, more transit-rich and cosmopolitan cities. Viewed through the "Developing Stories" prism, every city and neighborhood offered a thought-provoking contrast with Austin. In England and France, public transportation of every mode was packed, cars were tiny and apartments barely larger, and action on global warming was widely discussed. Want to reduce downtown traffic? In London, that public policy has sharp teeth: Driving a car into the central city zone (expanded this year) incurs a "congestion charge" of 8 pounds (about $16) per day -- a tool to reduce congestion, cut carbon dioxide and polluting emissions, and fund investment in public transport.

One Austin-worthy discovery was the Cyclocity program in Lyon, France -- now expanded to Paris and under consideration in numerous European and Australian cities. All over Lyon are handsome stands of sturdy red-and-silver bicycles -- and people whizzing by on those very same bikes. What was the story? My French friends explained that the Lyon bicycle program began two years ago, with thousands of bicycles-for-hire installed at hundreds of rental locations -- and that people literally jumped on the bikes in droves from the moment the program started. Since rental kiosks are handy everywhere, people simply swipe a bank or membership card, hop on a bike, and ride off, then leave it at another stand near their destination. If the trip is less than 30 minutes -- and 90 to 95% of them are -- the bike rental is free. After just two years, the program now logs about 20,000 bike rentals a day. People like the ease and convenience; they don't have to buy, maintain, lug, and store a bike (especially in those small urban apartments). In a city already so rich with transit options and pedestrian streets, the rapid popularity of the Lyon bicycle program was fascinating.

"It has completely transformed the landscape of Lyon -- everywhere you see people on the bikes," Jean-Louis Touraine, the city's deputy mayor, told The Washington Post. He added that the program was meant "not just to modify the equilibrium between the modes of transportation and reduce air pollution but also to modify the image of the city and to have a city where humans occupy a larger space."

Could such a program work in Austin? Now that construction has started on the Lance Armstrong Bikeway -- a continuous bike path across Downtown, from Lake Austin Boulevard on the west side to the Montopolis Bridge at U.S. 183 on the Eastside -- why not plan for bike-rental kiosks along the route? Perhaps they could be incorporated into the city's station-area planning for transit-oriented development, offering a way for Capital Metro rail commuters to get to work from the rail stations. (Asked about the idea, Todd Hemingson with Capital Metro expressed interest in exploring both car-share and bike-share options at stations for suburban rail commuters.) Austin may currently lack the density to make such a program work, but that may not be a problem for long. And we like bikes: Austin recently was named a Silver Level Bicycle Friendly Community by the League of American Bicyclists.

A spin around the Internet revealed that Lyon's program, launched in May 2005, and a spin-off Paris program, launched July 15, are provided by a private company, Cyclocity, a division of global corporation JCDecaux. "Cyclocity is a cost-effective, sustainable transport option that helps minimise the impact of traffic and congestion in towns and cities. ... [It's] complementary to public transport," the company's English website explains. Europe's largest outdoor advertising provider, JCDecaux, sells print and digital advertising space on street furniture, billboards, transport, solar-powered bus shelters -- and now bike-rental kiosks. The company was founded to fund public-sector services via advertising revenue; it works with city governments throughout Europe and globally, including in New York and Chicago.

While Cyclocity promotes sustainable transportation, it's the program's economic sustainability that makes it a whole other bike-share program. Other community bicycle programs here and abroad (like the existing Austin Yellow Bike Project and a similar program in Portland, Ore.) were modeled on the idealistic Amsterdam white bikes of the 1960s, in which bikes were left randomly around the city for free use -- eventually to be lost to theft, vandalism, or disrepair.

Cyclocity is different in three key ways: First, it trumps grassroots idealism with capitalism, as a for-profit public-private partnership between a city and a deep-pocketed corporation. Second, it innovatively combines the simplest of transportation technologies -- the bicycle -- with advanced microchip technologies that track the bikes, the users, and payments. Third, each city's program starts with the critical mass needed to attract users -- thousands of bikes and hundreds of rental stations.

In its 10-year deal with the city of Paris, JCDecaux is paying all of the program's start-up costs of about $115 million, according to a John Ward Anderson story in The Washington Post. All bike-rental revenues go to the city, and the company will pay Paris a fee of about $4.3 million a year. JCDecaux paid for all the bikes (about $1,300 each), as well as the automated pickup/drop-off stations. As the Post noted, "Each station has 15 to 40 high-tech racks connected to a centralized computer that can monitor each bike's condition and location. Customers can buy a prepaid card or use a credit card at a computerized console to release a bike."

"In exchange," the article continued, "Paris is giving the company exclusive control over 1,628 city-owned billboards, including the revenue from them, for the same period." Additionally, about half the billboard space will be returned to the city without charge for community-service advertising. In Lyon, the company gained advertising rights for 13 years on city bus shelters, and small-scale digital billboards accompany bike-rental stands. (One flashed ads all night on the street below my bedroom window -- un petit annoying.)

JCDecaux and Lyon cite the following numbers for that city:

• In the first three months alone, 15,000 members paid a small fee to join the program.

• Average journey time is 17 minutes and 1.7 miles in distance.

In Paris, the company estimates that each bicycle will be used 12 times a day, for a total of about 250,000 trips a day, or 91 million trips a year. They can be rented 24/7 and are used most heavily during commute times. By the end of this year, according to the Post, the Paris program should have "20,600 bikes at 1,450 stations -- or about one station every 250 yards across the entire city." A recent Paris study had compared trip times for travel by car, bike, taxi, and walking -- "and the bikes were always the fastest." Perhaps Austin needs to achieve Parisian-quality congestion before bicycle commuting can catch on?

Sophisticated technological tools at the service of the low tech bicycles have made all the difference. Computerized kiosks track users by an access code and credit-card information, which members place on file, along with a deposit of about $200 -- lost if a rental bike is out more than 24 hours. (Membership fees are about $40 a year in Paris but less than $1.50 for a day.) Also protecting against theft and damage is a specially designed sturdy, less-vandal-prone bike. Try to steal a bike, and the rack sets off an alarm; a built-in lock secures bikes at stops during rentals. (In Lyon, about 10% of the bikes reportedly are stolen each year, but many are recovered.)

The system sends in electronic data showing the locations of each bike. This allows bikes to be redistributed with trucks as needed to correspond to use patterns. (One complaint is that racks on places like university campuses can be full.) As reported on Wired magazine's website (www.wired.com), "A microchip exchanges information with electronic bike racks, identifying the bike, the subscriber, and when it was rented and returned." The bikes are also equipped with sensors that check basic maintenance and safety functions when the bikes are returned to their racks. If a malfunction is detected, the bike is temporarily taken out of circulation for repair and replaced by another.

City officials in Lyon report that vehicle traffic is down 4% since the program started, and bicycle use has tripled. Interestingly, the program has stimulated a boom in cycling and boosted private bicycle sales. In the first 10 months, users cycled 2.5 million miles. Within the first two years, they logged 10 million miles, preventing an estimated 3,000 tons of carbon dioxide from entering the atmosphere.

Of course, as my friend in Lyon cynically pointed out, there's a certain irony in fighting global warming with a bicycle program paid for by increased advertising -- which fans the flames of American-style consumerism, the real source of all our climate problems. C'est la vie.