The life and times of a porn-music impresario 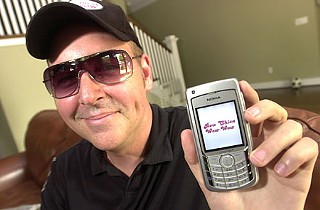 John Dial, software designer and porn-music impresario, is trying to explain his infatuation with the music of films like California Creamin' and Vampyros Lesbos. It's that funky bassline, he says, the growling, down-low groove that invokes images of satin sheets, cheap boob jobs, and furry-hatted pimps -- that bow chica wow-wow. "My dad used to play the Isley Brothers and Earth, Wind & Fire; it's just part of me," said Dial, who projects an unmistakably funkless Caucasian exterior, dressed in a baseball cap and T-shirt.

While his obsession may be considered, well, quaint, Dial has turned it into a business, displaying the type of can-do American entrepreneurial spirit that should make chamber-of-commerce types weep in their pancake breakfasts. His empire of porn music includes fluffertraX, an Internet radio site devoted to the music of sweet love. There's also his fluffertraX DJ show, which pops up in clubs around the country, as well as his line of "Bow Chica Wow-Wow" merchandise, including T-shirts, caps, coffee mugs, and license-plate frames. And he's launched BowChica Mobile, a ring-tone company, offering consumers the chance to answer their phones to the musical sounds of a 1970s triple-X feature.

It was BowChica that recently put Dial's capitalist dreams on a collision course with one of the world's biggest telecommunications companies, sending nervous ripples through the tight-knit mobile-phone industry and raising issues of corporate censorship. After months of licensing music and making contacts in the mobile-phone business, Dial signed a deal last year to sell the ring tones through Wapfly, a big international distribution site. BowChica went live on Wapfly in December, offering a variety of funky, PG-rated, pimp-friendly instrumental ring tones.

Just like that, BowChica was off the site. And Dial soon learned that he was radioactive; none of the ring-tone companies would have anything to do with him. (And T-Mobile still hasn't renewed its relationship with WapFly.) "I was horrified," Dial said. "It was totally unfair, beyond comprehension."

With true Texas perseverance, Dial decided to bypass the traditional mobile-phone distribution system and offer BowChica directly to consumers, who can now buy his eclectic fare through his site, BowChicaMobile.com. Billed as "Mobile for Grown-ups," BowChica offers a variety of PG-rated tracks for a $2.49 download fee, including clips from Brickhouse Betty, a brand built around an animated character; Clown Porn, a group that brings clowns into the adult genre; and Jackie "the Joke Man" Martling, best known as Howard Stern's former sidekick. But the T-Mobile incident still strikes a chord with him. "I think censorship is pretty heinous," he says. "It stifles art; it stifles thought. If companies can't handle ring tones, what other types of censorship are going on?"

Although fluffertraX is hardly taking the world by storm -- it generates a modest 1,000 listening hours a month -- the site claims a devoted following in places like Japan and the Middle East. In 2004, it won a Mikey Award from listeners of Live365, the company that hosts fluffertraX and a thousand other Internet stations, in the category of "Most Unlikely to Hear on AM/FM Radio."

At this point, Dial knows many of the directors and producers, who often help in his quest for music. "Within the adult industry, he's become very well known," said Daniel Metcalf of Daniel Metcalf Public Relations, which represents Wicked Pictures, one of the biggest producers. Dial often links with the film companies for giveaways and promotional events, and he's become proficient at connecting with companies like PimpHats.com, "the pimp party clothing store since 1997," to promote his business. "He's very creative at co-branding what he's doing," said Metcalf, adding that industry players respect Dial's knowledge of the music. "He's got a great library, and he's definitely got an ear -- one foot in the past and one in the future."

Over the years, the industry's interest in the music that accompanies the moans and groans and occasional shrieks of its films has ebbed and flowed. In the Seventies, filmmakers commissioned original music for their films; in the Eighties, many simply used stale library tracks or cheap electronica. In Europe, on the other hand, where they are more refined about their sexual art, top composers often developed tracks for X-rated films, and it wasn't unusual to release soundtrack albums, Dial notes.

In recent years, with the adult business sliding more and more into the mainstream, there's been a resurgence of interest in original music, as more companies look to add a classier veneer to their bang fests. Eddie Van Halen recently won an adult video award. Last year, Vivid, the biggest adult-film company, released separate soundtrack CDs with several of their DVD releases. "It was like a wet dream for me, personally," Dial said, using an oddly appropriate metaphor.

Even if the music doesn't grip Joe and Martha Public, Dial can take comfort knowing that Snoop Dogg is a fluffertraX fan. "Damn, I should've thought of that shit -- not because it's good music, but because it's damn funny," he wrote on his blog, the Snoop Doggy Blog. When Dial went backstage at a Snoop appearance in Austin wearing a Bow Chica Wow-Wow cap, Snoop recognized him. "He said, 'You're that porn-music guy. I want to meet you,'" Dial said. "That was pretty sweet."