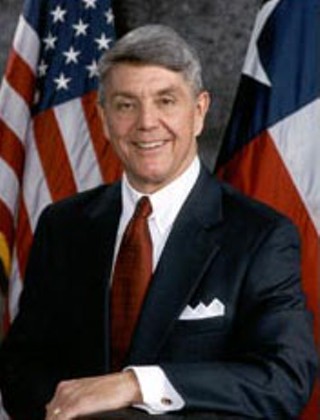 After a handful of presidential-hopeful fundraisers and a few exploratory committees, Texas Republicans have formally kicked off their 2008 election campaign. Anyone expecting policy changes would be disappointed, because at Monday's launch of Victory 2008, it quickly became clear: same old message, same old faces. The campaign, Gov. Rick Perry told the assembled crowd of media and party operatives at the Omni Downtown, will concentrate on core conservative values and core conservative voters.

Flanked by U.S. Sen. John Cornyn and Republican Party of Texas Chair Tina Benkiser, Perry announced that his former secretary of state, Roger Williams, would serve as the Victory campaign chair. This puts Williams, who resigned as the state's chief elections officer on July 1, back into his true calling of campaign fundraiser. Prior to becoming Perry's secretary of state, the Weatherford car-dealership owner served as a senior fundraiser and organizer on every Bush campaign since 1994, state finance chair for Cornyn in 2002, and chair of the Republican National Committee's big-donor-baiting Eagles program. Williams also has political ambitions of his own and is mentioned as a potential candidate for governor or U.S. Senate in 2010.

At Monday's press event, the governor, the senator, and the fundraiser each launched into campaign talking points. Perry stressed that property taxes were down and "frivolous" lawsuits were on the decline. Williams talked up the free-market approach and credited "commonsense taxes" for the state's success in attracting new business and new residents. Cornyn talked about sparking a national debate and how Texas Republicans would never become Beltway insiders. Yet it's clear that the ride to 2008 will require much more than talking points. Williams called this a critical year for Republicans in Texas, with GOP-held slots on the Texas Supreme Court and the Railroad Commission, as well as Cornyn's own seat, heading to the ballot box. Cornyn, with two Democratic opponents on his tail, admitted that in recent years Texas had been a low RNC priority in terms of time and money, because the state was considered safe territory. But that is no longer the case. Cornyn himself has become a political liability because of his vocal resistance to an immigration-reform plank favored by President Bush. There was also a snub or a major faux pas when Williams told the assembled media and party operatives that there is "not a Republican Texan on the [presidential] ballot" – something that would probably come as a great surprise to Texan Republican presidential hopeful and U.S. Rep. Ron Paul.

Campaign War Chest
Secretary of State Roger Williams' officeholder account is brimming with more than $200,000 in donor cash, suggesting that he has been stumping for dollars ever since Gov. Perry appointed him to the post in 2004.