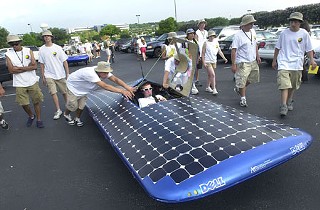 Here's an idea: If high school-aged kids want to drive around, make them design and build their own solar-powered cars.

Well, that's exactly what about 100 kids from around the country did – albeit for educational, not cruising, purposes – and on Monday they departed from Dell headquarters in Round Rock for a nearly 2,000-mile race through eight states, ending up in Newburgh, N.Y. The sunshine-fueled motoring is part of the 12th annual Dell-Winston School Solar Car Challenge, designed to give teams of teens hands-on experience in the science, engineering, and technology fields; build teamwork and communication skills; and foster interest in alternative energy and environmental responsibility. Race director Lehman Marks, a 40-year veteran science educator, who teaches at The Winston School in Dallas, said the event presents an invaluable opportunity to immerse students – including the occasional scientifically apathetic pupil – in the learning experience of a lifetime. While many racers have engineering careers in mind, others indicated they signed on to the solar challenge because, as extracurriculars go, it beats the shit out of drama club.

Much more than a science class on wheels, the challenge provides ample opportunity for cheap thrills. Members of Team Sundancer, students at Houston Vocational Center in Houston, Miss., grinningly recalled betting a Memphis cop that they could break 70 mph and winning. They said they've reached 78 mph in their vehicle, which looks more like a small plane than a car. Most cars expect to average about 40 mph during the race; the team that racks up the most miles wins.

Sundancer is the car to beat, having won its division the past seven consecutive years. Team member Lance Whitworth said he hopes to pursue an electrical engineering career at Mississippi State University and subsequently apply his high tech experience to the auto industry. Another team member said that, aside from high school football, the race team is about all its town of about 4,000 has going for it and said the community plays a crucial role in supporting the crew – both financially and emotionally. Among other things, when Team Sundancer returns to town, members are treated to a parade, complete with an Elvis impersonator.

Soft-spoken Tia Anderson, captain of Team Tushka Hashi III (or Sun Warrior), described her involvement in the challenge as "one of those things you try out, to see what you want to do in the future." Her team, hailing from Choctaw Central High School in Choctaw, Miss., is composed entirely of Native Americans. Team members think their newly built, supersleek, carbon-fiber-bodied Sun Warrior car can dethrone Sundancer. Regardless, the competition is a win-win: souping up young folks' enthusiasm for renewable energy, as well as careers in the science and engineering fields, both of which are strongly needed in upcoming generations. For more, see www.winstonsolar.org/challenge.