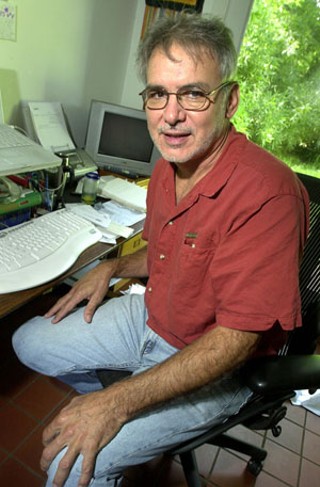 "Haven't you guys got anything better to do over there?" laughs Lou Dubose, a bit mystified that the Chronicle would find him worthy of a story. That's typical Dubose – self-effacing and dubious that the spotlight should even briefly move from his journalistic subjects onto himself. But after six books in seven years about the corrupt administration of George W. Bush – including three co-written with the late, legendary Molly Ivins – the former Texas Observer editor must admit that he is at least a minor media celebrity in Austin. And he caught our interest again precisely because that celebrity has reached beyond Austin – specifically, to The Washington Spectator, a biweekly national politics newsletter where he has been hired on as editor, a couple of months ago.

It's a job that, despite the implications of the publication's name, won't require too much of a change in Dubose's life. First off, the Spectator's website says, "Since 1974, our feisty bi-weekly bulletin has given independent-minded readers behind-the-scenes insight into significant news that is ignored by the corporate media" – in other words, what Dubose (who also had a brief stint as the Chronicle's news editor) has been doing for most of his journalistic career.

Secondly, he intends to do some of his spectating from outside the Beltway. "I think I'm going to spend some time in Washington," he says, adding, "I'll continue to live here [in Austin]. But I'll probably spend a week or two weeks a month in D.C. At this point, we're not really sure what we want to do with the newsletter. … Clearly, I will never be a deeply sourced Washington reporter, and I know that. So that's not what we're looking for."

Instead, the Spectator – which is published by The Nation veteran Kevin Walter, funded by the Public Concern Foundation, and headed by foundation President Hamilton Fish – wants more of what Dubose delivered in Bushwhacked: Life in George W. Bush's America, which he co-wrote with Ivins (Random House, 2003). "The conceit that informed it was looking at public policy, but how it actually sort of hit people on the head, or impacted people. So rather than writing policy-oriented stories from Washington, I'm going out, traveling around a bit – extensively, actually, with Bushwhacked – and doing dateline pieces, extensive pieces on what actually happens to people when, particularly, the Bush administration's public policy is inflicted on them. … We're looking for a mix of sort of capital Washington coverage and datelined coverage from around the nation."

At the same time, those frequent trips to Washington comfort Publisher Walter that the magazine can still stay true to its mission. "I had misgivings about having an editor who was not in Washington," Walter says. "The history of the newsletter going back to 1974 has been that our full-time editor has been in D.C. or suburban D.C. But Lou right off the bat said he didn't think he could do the job unless he spent a considerable amount of time in Washington, so I knew we were on the same wavelength in that regard. And the fact is, Lou's going to wear out a lot more shoe leather than any editor we've ever had. We may have had somebody perched in suburban D.C. all those years, but I think Lou's going to do a lot more active reporting and working his contacts than we're used to."

That's obviously going to require substantial overhead – not something lefty political mags, especially small newsletters, can usually afford. But remarkably, the Spectator – which is only about four pages per print issue – has attracted an impressive 85,000 subscribers, which, combined with some fundraisers, has made the publication a self-sustaining "tidy little revenue engine," according to Walter. (That will be quite a change from the Observer, where Dubose and current Chronicle News Editor Michael King co-edited a magazine held together in the 1990s with folksinger fundraisers, liberal donors, and spare change – although recent foundation support has made it more sustainable.)

The Spectator found Dubose about 2 months ago, thanks to a recommendation from Bernard Rapoport, the Waco philanthropist who kept the Observer afloat during those lean years. After the death of previous Spectator Editor Benjamin A. Franklin in 2005, Walter engaged in a "meandering" search for a replacement.

"It's a quirky job," Walter says. "When you're editing The Washington Spectator, it means you're the editor and writer all rolled into one. What attracted us to Lou were his skills as an editor, but also his hard-nosed background as a reporter. A guy who can write, who can wield a dangerous pen. That's a rare skill and something that we wanted to bring here.

"Obviously, another attractive thing was his unique perspective on this gang of Texas politicians, which is currently in center stage. We saw ourselves in a good situation here for the next couple of years to really make some noise and thought Lou could be the guy to do that."

Will the new job mean an end to book writing?

"It's possible to do both," Dubose says. However, "I think I've written too many books, to tell you the truth. I mean, I think I've been writing too fast on books and would like to slow down a bit, and this provides the opportunity to probably do both, but I'm not particularly interested in doing a book at the moment." (One more Bush book co-written with Ivins – Bill of Wrongs – is due in October from Random House.)

Dubose insists the death of his longtime collaborator Ivins was not a factor in the change. "Not at all," he says. "It was an enormous loss, but I still intend to write books. But you know, six books since 2000 is a bit faster than one should go. I'd like to take my time on a couple more books, but not such a treadmill." Point Austin: What Molly Wrote
Ivins and her kind