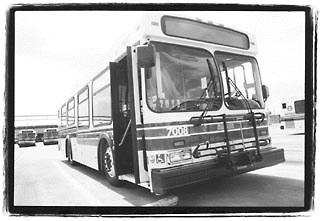 This bus may look like any other bus, but this baby runs on B20, an eco-friendly fuel made up of 80% low-emissions fuel and 20% recycled vegetable oil. The city and Capital Metro aim to make the B20 switch on their fleet of vehicles. (Photo by John Anderson)

By early 2008, the city of Austin will begin running many of its fleet vehicles on veggie-based biofuels. In recent years, as bio-diesel and ethanol have become more widely available, many an Austinite has inquired whether the city's ecologically savvy leadership would consider employing biofuels – not only as a means to cut pollution but to diminish dependence on foreign oil. The wheels of progress have indeed been steadily turning within the city, and now, as departments citywide work to implement the ambitious Austin Climate Protection Plan (enacted by City Council in February), biofuels are being sought as an immediate means to reduce the municipal fleet's climate-changing carbon-dioxide footprint, in pursuit if the plan's ultimate goal of a carbon-neutral fleet by 2020.

City sustainability officer Fred Blood explained that Austin can offset carbon output from its electricity use by buying renewable energy like West Texas wind power, but the only way to cut carbon from vehicle fuels is to transition to biomass. "Carbon from the exhaust isn't fossil carbon; you're not digging up carbon fixed millions of years ago," said Blood, adding that using bio-diesel and ethanol, followed by allowing the city to focus on conservation and not simply displacement, are the quickest and easiest ways to cut carbon before more electric and plug-in hybrids become available.

The city plans to have all of its diesel vehicles, including those operated by Austin Independent School District and Capital Metro, running on B20, a blend of 80% low-emissions diesel (already specially formulated to reduce smog) and 20% bio-diesel, which can be made from virgin or recycled vegetable oils like soy or cottonseed and is chemically processed to run in unmodified diesel engines. The city of Dallas began using B20 in April. The city's current fuel-supply contract expires in January, according to fleet officer Tom Wieczorek, and the new supplier will begin bringing in B20 by February. Wieczorek said Austin looked to Las Vegas, whose fleet has been using alternative fuels, including bio-diesel, for five years, as has Denton, which supplies itself with bio-diesel for B20 blending from its own bio-diesel plant, built in 2005 atop a decommissioned landfill and powered by belched methane gas. Wieczorek said Austin officials have considered mimicking the concept but first need to implement the fuel to begin with. Asked about higher bio-diesel blending, such as Blood's stated desire to use B80, Wieczorek said he's still in search of guarantees that higher blends won't affect engine longevity.

Wieczorek says ethanol implementation is more complex, as ethanol requires separate fuel storage since only so-called flex-fuel vehicles can run on E85, ethanol's typical incarnation: a blend of 15% gasoline and 85% ethanol, often made from corn or sorghum grass in the U.S. Many cities on the I-35 corridor already use up to 10% ethanol in gas to cut smog emissions. Corn-based ethanol takes a regular beating from critics for its historically low energy-yield ratio (taking nearly as much energy to make as it contains), for relying on an already heavily subsidized crop, and for diminished fuel economy compared to gas. But recent announcements are encouraging, like Georgia's permitting of a cellulosic ethanol plant, which will make fuel from formerly unutilized logging scraps, in addition to a newly operational, closed-loop corn ethanol plant located on a large cattle feedlot in Nebraska that's powered by cow manure and facility byproducts, making ethanol from the sugars extracted from livestock-grade corn, which is then fed to the farm's cattle. The latter plant boasts an impressive 46-1 energy-yield ratio, while cellulosic ethanol holds the potential for making fuel from all kinds of waste vegetation (think yard waste, seaweed, etc.). Wieczorek says Austin will have up to 300 flex-fuel vehicles by the end of 2008, including pickups and police cars, and that he'll be buying exclusively alternative-fuel-compatible vehicles from now on.

While few energy-watchers look to biofuels as the climate-change or oil-independence panacea, more governments and individuals are seeing the increasingly abundant fuels as a way to reform the pollution and oil-addiction ills perpetuated by the vehicles on which our cities must depend.