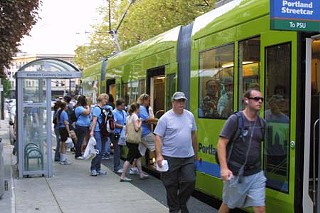 "Transportation is never an end in itself," notes Portland, Ore.'s U.S. Rep. Earl Blumenauer, a leading national streetcar advocate. "It's always been about shaping growth."

The envy-inspiring success of Portland's modern new streetcar system has been credited to "a perfect storm" of planning and priorities, city policy, community attitudes, collaborative decision-making, zoning strategies, development opportunities, and public-private investments. It's proven popular as transit: When the system opened in 2001, Portland had projected 3,500 weekday streetcar rides. By 2005, it had wildly surpassed those projections, attracting more than 9,000 rides on weekdays and more than 6,600 on Saturday. (Portland's excellent light-rail and bus systems interface with the streetcar, delivering a large portion of those riders.)

But most compelling, Portland's streetcar system has delivered eye-popping economic development returns on the investment. The streetcar system cost about $57 million to start up in 2001; by 2005, the system had helped produce some $2.3 billion in new development (now pushing $3 billion), within two blocks of the line in an urban-renewal district (including 70 acres of abandoned rail yards). The new development has included more than 7,200 housing units (25% of them designated as affordable). Developers have built compact, high-density, mixed-use projects all along the streetcar line – at 90% of allowable density, compared to 45% in other areas.

Austin can take heart from the fact that Portland's streetcar system took several false starts and community initiatives to finally come to fruition. What worked: creating a community nonprofit – Portland Streetcar Inc. – to get the voter support needed, the financing in place, and the job done. On the Portland Streetcar board were public sector representatives – like the Austin economic stakeholders identified by Cap Metro – as well as property owners and residents along the route. It was this independent stakeholder-governed organization – rather than the city or the transit authority – that drove the project. The stakeholders defined it, built support for it, and helped market its success. They won support from businesses, who agreed to be voluntarily taxed through a local-improvement district to help fund the first segment of the streetcar. The innovative LID assessed a tax on the property owners along the line, predicated on a future financial benefit from their proximity to the streetcar. Indeed, the businesses immediately enjoyed much-increased property values and gradually increased sales from all the new pedestrian traffic and area residents.

With neighborhood stakeholders in control, the system could be designed to address the concerns of existing neighborhoods and businesses – as of the new high-rise urbanites moving in. Once the right consensus for a community vision was in place, Portland Streetcar Inc. contracted with the city to design, construct, and operate the streetcar system. Helping immeasurably was the visionary and innovative Portland Development Commission, which has long crafted public-private partnerships to achieve ambitious civic goals. The project encountered minimal opposition as it moved through rounds of City Council votes. Notably, the city itself chose to shape and control the local circulator for downtown – rather than leave it to the regional transit authority, which had more far-flung problems to solve.

In Portland, financing for streetcar capital costs drew creatively from many different sources. The fare-box wasn't one of them: Riding the streetcar is free. (The Cap Metro financing study also recommends free rides, at least until ridership is at full capacity.) Parking revenues, fittingly, provided more than half the capital cost of the phase one segment: The city sold bonds backed by parking revenues from city-owned parking garages to raise $28.5 million. It also increased its parking rates by 10 cents to provide another chunk of change. A tax-increment financing district provided $7.5 million. The LID provided $14.6 million. A mix of other sources (including state and federal monies) provided another $11 million. Entrepreneurial revenue sources included sponsorships and advertising (some cities have sold naming rights to cars, stops, and the whole system).

Once people around Portland saw the streetcar up and running and heard about the incredible return on investment it was producing, it became an easy sell to raise funds for the systems expansion. The Portland City Council enacted tax-increment financing to pay for most of phase two; regional transportation funds paid for phase three. The regional transportation agency pays for two-thirds of the operating costs; the city pays for the other third.