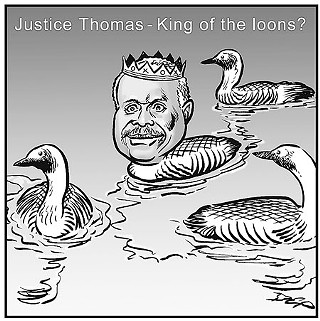 The U.S. Supreme Court's June 28 ruling in the case of Texas death row inmate Scott Panetti concludes that the law requires that condemned inmates have some "rational understanding" of why they're being executed in order to satisfy the Eighth Amendment's ban on cruel and unusual punishments. The court left open a single, significant question: Is Scott Panetti sane enough to die?

Writing for the 5-4 majority, Justice Anthony Kennedy opined that the Texas courts and the 5th U.S. Circuit Court of Appeals' handling of the Panetti case was "flawed" and "too restrictive" to satisfy the Eighth Amendment. In deeming him sane enough to be killed, the courts considered only that Panetti "is aware that he committed the murders," that he is "aware that he will be executed," and that he is "aware that the reason the State has given for the execution is his commission of the crimes in question." But according to Panetti, the state's reason for killing him is merely a cover story intended to stop him from preaching "the gospel of the Lord King."

That is irrelevant, says Clarence Thomas, writing for the conservative, four-justice dissent. The state owes Panetti nothing more that it has already provided. "While Panetti's mental illness may make him a sympathetic figure, state and federal courts have repeatedly held that he is competent to face the consequences of the two murders he committed," Thomas wrote. Therefore, this case "should be simple," Thomas wrote. It "must be dismissed." Given Panetti's background and the procedural history of his case, one has to wonder if Thomas is at least equally addled – if not more so – than the death row denizen he so easily disregards.

Panetti was convicted and sentenced to death for the 1992 murder of his in-laws, Joe and Amanda Alvarado, at their home in Fredericksburg. A diagnosed schizophrenic, Panetti previously had been hospitalized at least 11 times, last released from the hospital just two months before he killed the Alvarados. When he turned himself in to police that day, he told authorities that "Sarge" – a recurring auditory hallucination – was responsible for the murders.

In September 1994, a heavily medicated Panetti was deemed competent to be tried for the slayings, and Kerr Co. District Judge Stephen Ables allowed Panetti to represent himself at trial. Panetti wore a purple cowboy outfit to court, filed numerous rambling legal motions, and sought to subpoena nearly 200 witnesses – including Jesus Christ and Anne Bancroft. The trial was "truly a judicial farce and a mockery of self-representation," Panetti's standby attorney later said.

Panetti was convicted, each of his appeals was denied, and Judge Ables scheduled his execution for Feb. 5, 2004. Panetti's attorney filed a motion with the court claiming Panetti's mental illness rendered him incompetent to face execution. Ables denied the motion, but the federal district court ordered that he reconsider. Ables appointed two mental-health experts to assess Panetti's mental state; in April 2004, the experts concluded that Panetti's "uncooperative and bizarre" behavior was actually a sham and that he had "the ability to understand the reason he is to be executed." Ables refused to consider the defense's request for an evidentiary hearing and closed the case. Panetti's lawyers – now including Austin appellate whiz Keith Hampton – appealed. In September 2004, federal District Judge Sam Sparks called the state's handling of the case "constitutionally inadequate" but ultimately ruled against Panetti, noting that the 5th Circuit's "test for competency to be executed requires [that Panetti] know no more than the fact of his impending execution and the factual predicate for the execution."

The Supremes now say that the 5th Circuit's standard is not good enough. "The … standard treats a prisoner's delusional belief system as irrelevant if the prisoner knows that the State has identified his crimes as the reason for his execution," Kennedy wrote. There is nothing in the law to "indicate that delusions are irrelevant to 'comprehen[sion]' or 'aware[ness]' if they so impair the prisoner's concept of reality that he cannot reach a rational understanding of the reason for the execution," he wrote.

Appearing before the high court in March, Texas Solicitor General Ted Cruz argued not only that the 5th Circuit's standard was sufficient but also that Panetti didn't have standing to appeal. In his initial habeas appeal, Panetti failed to claim he would be incompetent to face execution, Cruz argued; moreover, the federal district court (and, ultimately, the Supremes) failed to offer deference to the Texas courts, which have consistently deemed Panetti competent. In his dissenting opinion, Thomas agreed. In Thomas' opinion, the state courts had "more than satisfied" their legal obligation to Panetti. Panetti's insistence that he is too crazy to die, Thomas opined, is nothing more than an "abuse" of federal habeas law.

Kennedy shoots down each argument and offers a harsh rebuke to the Texas courts and, specifically, to Judge Ables. No "deference is due" to the state courts, he wrote, because the courts failed to do anything but rubber-stamp the initial competency determination. Further, Kennedy opined, Panetti could not argue his incompetence to be executed until an actual execution date had been set – otherwise, he noted, every lawyer would be forced to waste court time and resources on the off-chance that her client may at some point in the future be deemed too deluded to execute.

Ultimately, Kennedy wrote, the courts must find a way to determine whether an inmate has a rational understanding of why he is to die. It is a question of retribution vs. spite: "[I]t might be said that capital punishment is imposed because it has the potential to make the offender recognize at last the gravity of his crime and to allow the community as a whole … to affirm its own judgment that the culpability of the prisoner is so serious that the ultimate penalty must be sought and imposed," Kennedy wrote. "The potential for a prisoner's recognition of the severity of the offense and the objective of community vindication are called in question, however, if the prisoner's mental state is so distorted by a mental illness that his awareness of the crime and punishment has little or no relation to the understanding of those concepts shared by the community as a whole."

Panetti's case will return to federal district court, where Judge Sparks will be asked to decide whether Panetti is, in fact, sane enough to die.