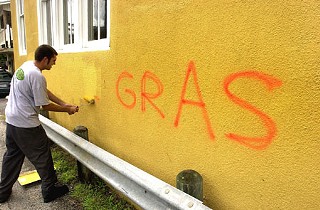 Animal rights activists who vandalized at least seven Downtown restaurants that sell foie gras or veal may be unintentionally hog-tying the efforts of a separate animal rights campaign that is focusing exclusively on banning the sale of foie gras.

"Obviously it's somebody who has their own agenda, because we're only working on getting foie gras off of restaurant menus," said Noah Cooper, a co-founder of the fledgling Central Texas Animal Defense. "We're not currently working on any veal campaigns." Cooper denies any connection between his group and the serial saboteurs who spray-painted obscenities on the facades of several Downtown dining establishments after closing time July 2 or early July 3.

The vandalized businesses range from homegrown fine-dining bistros to chain restaurants that lean more heavily toward veal dishes. The graffiti guerrillas used a bright-orange water-based paint that is reasonably easy to scrub off of most surfaces. However, one of the restaurant victims, Aquarelle, required more than $100 worth of work to repair the damage to its turn-of-the-century home, which includes the original double doors imported from England.

Only the two locally owned businesses – Aquarelle, at 606 Rio Grande, and Jezebel, at 914 Congress – filed vandalism reports with the Austin Police Department, and they initially were believed to be the only targets. Fox News Austin reported Monday, however, that five other restaurants were also tagged during the same spray-painting spree and that the culprits posted photos of their "work" on the Internet. These restaurant targets included Eddie V's, Ruth's Chris Steak House, Fleming's, Truluck's, and Spaghetti Warehouse, which offers veal parmigiana on its menu.

Cooper, an Austin newcomer from Florida, says he's never heard of some of the businesses, namely because they fall outside of his group's single-issue menu item – foie gras. "I don't condone vandalism," he said. "We would much rather focus on reaching out to these restaurants and their customers." The group has written or spoken to the owners of 15 to 20 restaurants, Cooper said. 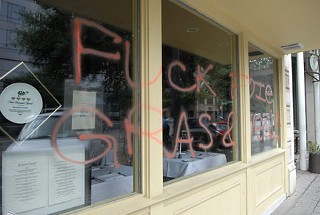 Sales of the plumped-up livers of ducks and geese have grown dramatically over the last decade in U.S. fine-dining establishments. As with most other animals raised for human consumption, the foie gras production process isn't pretty. The pricey delicacy arrives on one's plate by means of force-feeding the waterfowl – typically duck in the U.S. – with a pneumatic tube in order to fatten the liver before slaughter. While the dish has its origins in ancient Egypt, foie gras has long been an important part of France's cultural and cuisine identity.

Controversy over the production and sale of foie gras has gained steam in the last couple of years. More than a dozen countries have banned its sale within their borders; California has passed a statewide ban that goes into effect in 2012, and a similar ban is already in place in Chicago, although city officials are mulling a reversal of the ordinance. The national Humane Society has joined other animal rights groups in opposing foie gras, while the American Veterinary Medicine Association is expected to vote on an anti-foie-gras resolution as early as Saturday, during its annual convention in Washington, D.C. The organization has rejected similar resolutions four times, according to the association's website.

Because foie gras is more closely associated with high-end diners, it's uncertain whether the protests will have the same impact as the tuna-dolphin debate of more than a decade ago. So far, the Driskill Grill is the only restaurant to stop serving the item. Ron Weiss, owner of the venerable Jeffrey's restaurant, said he considered taking foie gras off the menu but decided to leave it on after doing some research and consulting with the restaurant's executive chef and staff.

Cooper, meanwhile, says he'll continue trying to convince the 15 to 20 restaurants on his contact list to stop selling foie gras. He says his group is taking a different approach with Jezebel – twice-weekly pickets in front of the restaurant – because owner/chef Parind Vora refuses to meet with Central Texas Animal Defense.

Vora says he's dismissive of the group because "they don't know what they're talking about." The medical-school-dropout-turned-chef says there's no scientific evidence to support the notion that force-feeding ducks is cruel and inhumane. "Their physical makeup is very, very different," he said, explaining, in so many words, that ducks have no gag reflex and don't suffer from the fattening-up feeding process of inserting a tube down their throats. "Compared to other types of animal production, foie gras production is a country club," he said. "It's a very artisan product. You're not throwing thousands of carcasses into a hopper that's going to grind it into meat."

Vora opened his restaurant a year ago, to largely favorable reviews. But the twice-weekly picketers are not easy on the independent restaurant, where Vora serves as multitasker extraordinaire. Not only is he the chef and owner of the business, but he also cooks all the dishes on the menu. "I'd rather not have this kind of publicity," he said of the recent media coverage. "I'd rather be able to go on and run a restaurant and have it do well or do bad based on the merits."

Aquarelle co-owner Teresa Wilson said that while she was very angry when she saw the orange-splattered defacing of her restaurant (where veal is currently absent from the menu), her mood improved considerably just hours after cleaning up the graffiti mess. "That Tuesday night," Wilson said, "we sold out of foie gras." 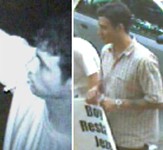