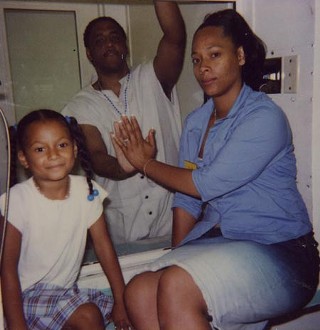 Kenneth Foster with his girlfriend, Nicole Johnson, and their daughter, Nydesha, during a 2001 visit to Texas death row
Photo courtesy of the Foster family

The Texas "law of parties" is back in the death row spotlight, with the filing of a final appeal for condemned Texas inmate Kenneth Foster, scheduled for execution Aug. 30 for his role in the 1996 murder of Michael LaHood in San Antonio.

Foster and three other men, Julius Steen, Dwayne Dillard, and Mauriceo Brown, were riding around San Antonio on Aug. 14, 1996, in a rental car Foster borrowed from his grandfather. Brown had a gun, and earlier that evening the four men participated in two random robberies – stealing money and possessions from random people in parking lots but physically harming no one. After midnight, the four found themselves riding behind two cars in an unfamiliar part of town. Foster, then 19, followed the cars, which eventually stopped outside a large house at the top of a steep driveway. There were several cars there, and it looked like there might be a party. The four men stopped; a young woman approached and leaned into the car. She bickered about them following her car and then eyeballing her figure. The woman walked up the driveway, and Foster was about to drive away when Brown jumped out of the car and followed the woman and LaHood toward an entry gate outside the home. Moments later, the three in the car were startled by a gunshot; Brown jumped back in the car. He had shot and killed LaHood.

Kenneth Foster did not kill LaHood; there was no doubt that Brown fired the fatal shot. Still, the Bexar Co. District Attorney's Office argued that Foster was criminally liable for the crime under state law because he "should have anticipated" Brown would kill LaHood. The DA's theory was that the four intended to rob LaHood and had entered into a conspiracy to do so. That they didn't intend for LaHood to die was not important because their behavior (in planning a robbery and in carrying out previous robberies) was so reckless that they easily could have anticipated the loss of life. Foster was convicted and sentenced to die for the killing. Unless the Texas Court of Criminal Appeals grants his final appeal, he will be executed next month.

To attorney Keith Hampton, executing Foster would be a grave miscarriage of justice. He says the prosecution's entire case against Foster was built upon an ambiguous snippet of testimony offered by Julius Steen during Foster and Brown's five-day joint trial back in April 1997. (Brown was executed for the murder last July.) Steen testified at trial that he "kind of thought" that Brown intended to rob LaHood when he jumped out of the car to follow the woman, Mary Patrick (LaHood's girlfriend). What Foster's trial attorneys didn't know, says Hampton, is that Steen didn't actually mean what prosecutors alleged he meant – and what he did mean changes everything. Before Foster's trial, Steen copped a deal with prosecutors: In exchange for his testimony in the LaHood case and in another unrelated, federal capital murder case, he would receive a truncated sentence for robbery. Steen's attorney refused to let Foster's lawyers interview Steen before the 1996 trial, so they had no way to effectively cross-examine Steen's testimony. It wasn't until early 2003 that Hampton finally got a chance to interview Steen. Steen told him that he didn't think Brown intended to rob or to kill LaHood; he said there was no conspiracy among the four men – and certainly none between Brown and Foster. Foster, he said, seemed to be in shock after hearing the gunshot, as did Brown. "When Brown got back in the car, we were all shocked," Steen wrote in an affidavit. "Even Brown looked shocked. I don't think that Brown knew why he shot the man and was surprised [himself] that he did."

Steen told Hampton it wasn't until after Brown left the car and was up at the top of the LaHood driveway (nearly 90 feet away) that it crossed Steen's mind Brown might attempt to rob LaHood. It was a fairly stunning revelation that completely dismantles the prosecution's assertion that Foster was involved in a "conspiracy" to rob LaHood – and, thus, under the law of parties, criminally liable for his murder. "Steen has now refuted the inferences that Foster was a party to Brown's murder of LaHood," Hampton wrote in Foster's final appeal, filed June 14. "The inferential theory of an understanding between Foster and Brown to rob LaHood crumbles with Steen's explanation about his ambiguous and heretofore unexplained" testimony. The Court of Criminal Appeals denied Foster's first appeal in 2002, before Hampton talked to Steen. So he argues that the court must revisit the case to consider this new, and previously unavailable, evidence, which eliminates Foster as a conspirator in a robbery-murder plot. (Although the prosecution's "conspiracy" theory should implicate Steen and Dillard – making both men eligible for the death penalty, as well – prosecutors never pursued a similar case against either man. Steen cut a deal, and Dillard was never charged with any crime in connection with the murder.)

Hampton notes that in denying Foster's first appeal, the court pointed to Steen's trial testimony as central to the case: The case against Foster, the court wrote, "rested largely on [Julius] Steen's testimony as an accomplice." Now, Hampton says, he finally has the evidence needed to prove that simply was not the case. "Because this newly-discovered evidence is the heart of Foster's culpability," Hampton wrote, "any doubt about the impact of Steen's testimony must be resolved in favor of Foster in order to avoid the miscarriage of justice which … permitting his execution would create."

At press time, Foster's appeal was still pending before the court. (For more on Foster and the state's law of parties, see "Wrong Place, Wrong Time," Feb. 11, 2005.)